The well-being of any community is significantly influenced by its health. One of the key components of human growth and advancement is regarded to be health. A person’s physical and mental well-being is considered to make up their state of health. There are numerous tribes in India, each of which exhibits a unique level of poverty and economic backwardness. With 8.6% of the population being tribal, India is having trouble closing the healthcare gap between the tribal and non-tribal populations. Tribal populations experience a triple, if not quadruple, burden of disease, including communicable and non-communicable illnesses, hunger, mental illness, and addictions exacerbated by poor health-seeking behaviour. The tribal population of the nation is one of the most marginalised and vulnerable groups, and they have consistently exhibited ignorance and negligence. The goal of this article is to highlight the various aspects of the tribal health and medical services that are provided in the nation’s tribal communities.

The Status of Tribal Health

Tribal people’s poorer health status is a widespread issue. In the majority of the countries, a recent international analysis found that tribal people’s health and socioeconomic outcomes were worse than those of the general population on 9 different metrics. In India, there are many different tribes that make up a heterogeneous group. The one thing tribal populations in India have in common, however, is that they have worse health metrics, a heavier burden of morbidity and mortality, and very restricted access to healthcare services. So, in order to portray the picture of the state of tribal health, we are offering certain statistics that reflect the population’s health.

Everyone agrees that tribal people’s health is appalling. Because of the distance and difficulty of access, this state of health is further compounded and complicated. Health care facilities or systems cannot be reached by the majority of Indian tribes because they dwell in hilly terrain, making it impossible for them to receive medical care. The magico-religious healthcare system has a significant advantage over tribal healthcare. Due to the lack of healthcare facilities in the community and the surrounding areas, as well as their long-standing faith in herbal remedies, they have become dependent on this system.

In the tribal communities, the contemporary healthcare system is in a complete state of ignorance and disregard. Even while government initiatives such as the National Rural Health Mission were successful in establishing the health gap in the majority of tribal populations’ rural places, there is little to no medical staff to care for the patients who are seeking treatment. The districts’ private clinics and paramedical workers were overworked due to the lack of medical personnel, which led to extremely substandard and nonexistent health infrastructure. The lack of medical workers increased the workload on the paramedical staff and the private clinics in the area, making the health infrastructure extremely weak and insignificant. Numerous studies indicate that there is a staffing deficit in the nation’s tribal regions. The practise of modern medicine has penetrated the tribal people and coexists successfully with ethno-medicine, which is still widely practised in the tribal world. Both are crucial to their health care, and the tribal members use both of them. The shortage of primary healthcare services is reported to be present in 27% of Health Sub-Centres (HSCs), 40% of Primary Health Centres (PHCs), and 31% of Community Health Centres (CHCs) throughout 18 states and 3 Union Territories.

There are several issues with health care that the indigenous population as a whole may easily identify. Tribal populations are extremely difficult to comprehend because of their intimate ties to the natural world. Malnutrition is among the conditions that affect the tribal community the most frequently. Tribal groups are especially prone to malnutrition because of their long-standing socio-cultural customs and low literacy rates. Only a handful of these children’s under nutrition-related deaths make the news, despite the fact that they occur frequently. This state of affairs is a result of numerous disadvantages that the tribal population has experienced over the years. The poverty rate among tribal people is significant (at 47% in rural areas and 30% in urban areas), and almost every second tribal household experiences food insecurity due to low calorie and protein intake that is 25% to 53% below the Recommended daily allowance.

Lack of awareness in the tribal groups is another element contributing to health care issues. Without knowledge and awareness of the very core cause and aetiology of health problems, it is nearly difficult to cope with the concerns and challenges that are related to health. Unfortunately, tribal communities are less aware of health-related issues because of their low literacy rates. 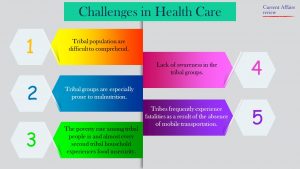 Tribes frequently experience fatalities as a result of the absence of mobile transportation in emergency situations and the remote locations where they live, which makes transportation more challenging for them. A profound cultural divide exists between the tribal population and non-tribal medical professionals, which has an impact on the overall health care system. The tribal communities’ dire economic circumstances are one of the main obstacles to obtaining health care. The majority of the tribes are extremely poor, which renders them more susceptible to sickness.

The type and amount of health care they receive is influenced by their low income and financial limitations. As a result, more fatalities are reported because they are left untreated and in a continual state of disease.

Roadmap for the Future

In particular, the traditional healthcare system, tribal groups’ health practises and policies are in danger. The traditional and indigenous knowledge that tribes retain is likewise in transition and subject to change. Sincere efforts should be made in order to mainstream native health, medicine, and practises. The majority of tribal communities are more hesitant to interact with members of the contemporary world. Therefore, active measures should be taken to integrate them into contemporary culture. The responsibility for promoting the welfare and health of people should fall on all societal segments and stakeholders. The issues surrounding social and economic exclusion as well as the lack of access to indigenous knowledge, must be addressed using the proper intervention techniques, such as systematic and scientific evaluation, planned and phased intervention, policy advocacy, sustainable resource utilisation, and large-scale resource mobilisation. Further, massive efforts should be made to promote health literacy. So that everyone, including children, women, the elderly, widows, etc., might reap the benefits of the same. A comprehensive strategy plan should be created at the local governance level to increase health literacy. Due to the high rate of malnutrition among the children in the tribal community. To reduce the issues of child malnutrition, Anganwadi Centres should be strengthened. The health difficulties affecting children, notably the issue of malnutrition, might be resolved with increased financial support for the Anganwadi institutions.

It is evident that tribal health exists on a continuum of states. Numerous government and non-governmental groups are working to address the indigenous health challenges. Numerous innovations are being used to advance healthcare and make it accessible to the most vulnerable people. The government is dedicated to making improvements. However, unless community members are included in the process of developing health care, the problems and issues with this population’s health would remain dormant. As a result, after 11 five-year plans, the Ministries of Health and Family Welfare and Tribal Affairs jointly established an Expert Committee on Tribal Health in 2013 to address the pressing need to establish a health care system. This was done in recognition of the need to treat tribal people’s health with serious and particular attention. The Expert committee has made a few 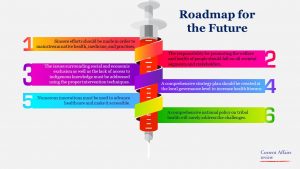 recommendations in light of the target date of 2027, which was set as a deadline for closing the current gap in tribal people’s health conditions and bringing health coverage and outcome indicators on par with the state’s average. The primary focus of these suggestions is improving the system of primary care: To reach the unreached. Given this purpose, the committee has identified 10 distinct concerns affecting tribal communities and has established goals for each of them. Controlling malaria, reducing the use of additives, reducing malnutrition, lowering child mortality, protecting women’s health and safety during pregnancy, promptly treating animal bites and accidents, offering family planning services along with infertility care, addressing sickle cell disease, increasing health literacy, and improving the well-being of children in Ashramsalas are some of the important ones. Also, numerous creative tactics were used in various states to broaden its support by involving the populace and educating them through channels they could easily accept. For example, to increase tribal communities’ knowledge of health issues in the state of Rajasthan, health messages were frequently presented live through performances by drummers, dancers, folk musicians, magicians, puppeteers, etc. In addition, incentives were tied to the ASHAs for the same following successful completion of activities.

Therefore, a comprehensive national policy on tribal health will surely address the challenges and issues that tribes and their medical practises encounter. It is necessary to integrate the modern scientific medical system with a tribe’s traditional medical knowledge (ethnomedicine). The use of traditional herbal remedies used by tribal people needs to be supported wherever it is useful and more research needs to be done on them. States should move quickly to identify the needs and priorities of their own tribal populations and create goals and targets to accomplish the same using tested public health techniques.

No 100% quota: On overzealous reservation

The Supreme Court has recently quashed 100% reservation provided for the Scheduled Castes in the Scheduled Areas of Andhra Pradesh considering its unconstitutional. The editorial evaluates the decision of the SC. Details from the news [Read More]

Incapacity and disability are often used interchangeably. Due to general public view and prejudices, there is a widespread underestimating of Divyangjan’s abilities and potential, which feeds a cycle of underachievement. Negative attitudes toward disability may [Read More]

The External Affairs Minister has highlighted the need for the countries under the BRICS group to support the private entrepreneurs especially the MSME sector to help them deal with the economic fallout of the pandemic. [Read More]