The women’s question repeatedly figured in the colonial discourse on India whereby what the Western observers came to perceive as the present predicament of Indian women came to be utilized to constitute an index of the position of various civilizations, i.e. the alleged degraded condition of Indian women was utilised to establish the supposed inferiority of the Indian civilisation. Naturally, the women’s question became the main focus of the Indian reformers and also came to constitute the nucleus of the nationalist discourse in course of time. In their bid to counter this colonial discourse on women, the Indian intellectuals constructed and asserted the image of a golden past which was marked by the high status of women, that is, one where they had dignity and honour. Thus they sought to seek the reforms of those very customs which they came to perceive as deviations from this ideal past. It was precisely within this framework that the questions concerning the banning of the custom of sati and that of widow remarriage were addressed.

The custom of sati, which involved the self-immolation of widows on the funeral pyres of their dead husbands, came to be prohibited by the then Governor-General Bentinck in 1829 by means of government regulation following the strong abolition campaign carried out by Raja Rammohun Roy, whereas the Hindu Widow Remarriage Act was passed in 1856 following the campaign of Iswarchandra Vidyasagar. However, both these acts mostly proved to be ineffective in terms of achieving the emancipation of women. For a while in the case of sati, despite the decline in the actual incidence of the custom following the government regulation but the idea and myth of continued to persist nevertheless and was even more importantly continually reaffirmed by means of epics, ballads, and folktales; as far as the latter act deprived the widows of their right to their deceased husbands’ property thereby further reaffirming the Bramhanical norm of honouring solely the chaste widows. Furthermore, given the colonial assumption concerning the indigenous society being entirely guided by the scriptures, both these laws were entirely grounded in scriptural logic. The debates concerning sati and widow remarriage were far less concerning the actual plight and predicament of women engendered by such customs and rather far more centred around the question of authenticity of traditions. Thus as has been pointed out by some scholars, women were neither the objects nor subjects of such debates but rather the ground for them, and they were themselves marginal to the debate. Thus they were stripped off agency in a discourse on their own supposed emancipation.

Women’s education constituted one of the central themes of both the colonial and nationalist discourse on women in the 19th century. The initiatives for female education were primarily taken by three groups, namely the colonial masters, the Indian reformers, and, lastly, the educated Indian women. Now, although it is indeed true that the campaign for women’s education was not entirely a failure as numerous women from middle-class background came 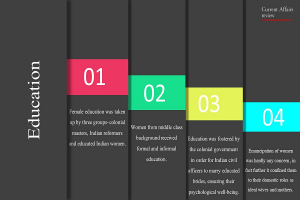 to receive either formal or informal education, yet it nevertheless hardly achieved anything as in terms of emancipation that it turn may be attributed to the objectives that guided this project at the very first place. While the colonial government promoted the project of women’s education for the purpose of the Indian civil servants to be married to educated wives and thereby ensuring their psychological wellbeing by removing the possibilities of a split household and also because it was convinced that English educated mothers would breed loyal subjects; the Indian educated male elites intended to achieve the Victorian ideal of companionate marriage. Hence emancipation of women being hardly the concern of both the groups, the education campaign far from liberating the women, in fact further confined them to their domestic roles as ideal wives and mothers.

The nationalist discourse, too, since its very inception in the second half of the 19th century, addressed the women’s question within the long cherished and accepted framework of ideal domesticity. Women were now endowed upon with a halo whereby they came to be upheld as the true symbols of the pristine moral order that, in turn, was the symbol of the true and unsullied spirit of India, which succeeded in remaining uncontaminated from Western influence. The nucleus of the nationalist discourse on women was the concept of the motherhood whereby the entire 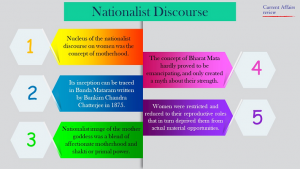 country came to imagine as mother. The inception of this concept can be traced to the famous song Bande Mataram written in 1875 by Bankima Chandra Chatterjee, which was later incorporated in his seminal work that is the novel entitled Anandamath in 1882. The nationalist image of the mother goddess was a blend of the familiar image of the nurturing and affectionate Bengali mother and that of the concept of shakti or primal power that was represented in Hindu cosmology by the images of Goddess Durga and Kali, who destroyed all sorts of evil and protected the innocent. Historians have recently, however, pointed out that this concept of Bharat Mata hardly proved to be emancipator, for this idea having raised women on a pedestal thereby creating a myth about their strength and power stripped them off their real power. Motherhood being concluded to be the ultimate identity of women, they were reduced and restricted to their reproductive roles that in turn aided the process of depriving the women of actual material opportunities such as education and profession and thereby all the possible avenues to empowerment.

Participation In Movements Prior To Gandhi

Women, albeit indeed participated in various movements, the Swadeshi movement in Bengal being its greatest example, but even this failed to lead to considerable emancipation or develop feminist consciousness for such participation was ensured to stay within the accepted boundaries of gender ideology that glorified solely the domestic roles of women. Thus they were involved in the boycott of British goods, use of Swadeshi products, crush their bangles and observe non-cooking days as rituals of protest. Also, it must be noted here that one of the most effective imageries of women’s mobilisation during this period was that of Goddess Lakshmi, i.e. the goddess of prosperity who it was claimed had now left her abode due to partition and hence had to be brought back, protected and looked after. Hence the nature of participation of women by no means oppose the accepted norms of feminine behaviour.

Participation in Movements after the Coming of Gandhi

The Gandhian movements marked a major rupture in the story of women’s involvement in the nationalist movement. In contrast to the earlier notions of ideal Indian womanhood that concentrated on the aspect of motherhood, Gandhi shifted the focus to sisterhood by negating women’s sexuality. His clarion call to women was full of religious metaphors that by no means appeared to be subversive of the traditional values about femininity. Gandhi, although used the examples of Sita-Damayanti-Draupadi as role models for women who were perceived as no slaves of their husbands, but rather ones who were capable of making immense sacrifices for their family; but while addressing Muslim women, he avoided such references which might appear to be strictly Hindu and instead and simply appealed to them to make sacrifice for their country and Islam. Gandhi by no means subverted the traditional concept of Indian womanhood, and neither did he invert the doctrine of two separate spheres, which is the private and public, but rather ensured political participation by creating a space for politics in home.

Women’s participation in Gandhian movements can be traced back to 1913, when in South Africa, Gandhi involved women in public demonstrations. Women actively participated in the Rowlatt Satyagraha and the Non-cooperation movement as well, though Gandhi prescribed a very limited role for them in case of the latter that merely involved boycott and swadeshi. Women nevertheless claimed for themselves a greater active role. For example, in November 1921, thousands of women greeted the Prince of Wales in Bombay, followed by the participation of Basanti Devi, wife of C.R.Das, his sister Urmila Devi and niece Suniti Devi in open demonstration in the streets of Calcutta and courting arrest in December. It must be noted here that Gandhi succeeded in appealing to not just women from respectable middle class families but also marginalised women such as prostitutes and devadasis, though Gandhi himself was hesitant to involve them. The threshold was in fact, reached during the Civil Disobedience movement when thousands of women participated in the illegal manufacture of salt, picketing foreign cloth and liquor shops, and also participated in processions. Besides, some women in Bengal even got involved in violent revolutionary movement, and contrary to the Swadeshi movement they actually shot pistols at magistrates and governors rather than being restricted to mere supportive roles.

Gandhi’s immense appeal to women may be attributed to the fact that he portrayed women’s service to the nation as a part of their religious duty. Given his emphasis on non-violence and maintenance of respectable image of female satyagrahis, Gandhi remained well within the limits of accepted norms of feminine behaviour, and thus the men were assured that their women were safe in Gandhi’s hands. Thus basically, the women participated because their male guardians wanted them to do. Besides, given the fact that most of women who participated came from families where the men were already involved in Gandhian movements, the public role of women merely came to be perceived as an extension of their domestic roles as mothers, wives, sisters, or daughters. Thus some historians are of the opinion that such traditionalist moorings were the reason as to why this politicisation was possible and as to why it failed to promote to any significant extent social emancipation of women in India. The Congress was by no means interested in women’s issues and never included women in any decision making process, but rather merely allowed for some symbolic presence. Nevertheless, we can hardly overlook the fact that despite these foibles, such active participation of women, especially of those from respectable families which even at times amounted to going jail and suffering indignity, and despite that coming back to their families without any stigma attached undoubtedly echoed a remarkable change in Indian social attitudes. Besides, albeit not openly deviant but certain women were nevertheless slowly pushing the boundaries of their autonomy by manipulating various cultural metaphors such as that of the extended family. Mention may be made of Bi Amman, the elderly mother of Shaukat and Muhammad Ali, who not only actively participated in the Khilafat movement but even more importantly at a mass meeting in Punjab lifted her veil and addressed the crowd as her children concluding that a mother did not require a veil in front of her children thereby including the whole nation in her extended fictive family.

Now, although it is indeed true that the period following the rise of Gandhi in Indian politics witnessed major changes in terms of the nature of participation of women in various movements, but how far this led to actual 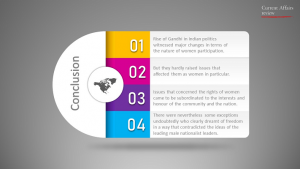 emancipation of women or aid the process of developing a feminist consciousness in the country especially among women is doubtful. For although women did indeed claim agency in the movements in course of time, but they hardly utilised this opportunity to raise issues that affected them as women in particular. For such issues that concerned the rights of women ultimately came to be subordinated to the interests and honour of the community and the nation, although there were some exceptions undoubtedly who clearly dreamt of freedom in a way that contradicted the ideas of the leading male nationalist leaders.

Extremists and their Influence in Consolidating Anti-British Agitation

The latter half of the 19th century witnessed a steady growth in the political consciousness of the people. However, the leaders hardly succeeded in attaining any concessions from the British masters, and the colonial exploitation [Read More]