As the 21st century dawned, India began to be widely regarded as the next superpower. This optimism stemmed not just from its huge strides in the economic and military build-up that it has taken post the LPG reforms but from its growing soft power as well. Historically, India has been replete with soft power right from ancient times. Post-independence, India’s first foray into global affairs isn’t through military adventurism but by building upon what it has learned from its ancient wisdom and freedom struggle. As a result, non-violence, tolerance, brotherhood and spirituality, peaceful coexistence, etc., have become the guiding spirit and bedrock of India’s soft power. The halo of soft power that India projected during the cold-war era has garnered worldwide recognition for India.

Even in the past decade, from undertaking mammoth disaster relief operations during the 2004 tsunami in the Indian Ocean to undertaking the world’s largest civilian evacuation during operation Rahat, India has been relentlessly augmenting its soft power to complement its global and regional ambitions. An arguable amount of halo still remains, but obviously, much of it laid dormant in the last 70 years.

What is Soft Power?

The term “soft power”, which was coined by Joseph S Nye in the late 1980s, is the ability of a country to persuade others to do what it wants without force or coercion. The traditional concept of soft power essentially banks on three 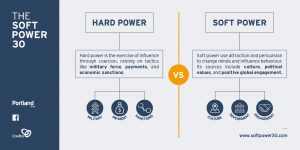 elements, namely, foreign policy, culture, and political values. The foreign policy includes the relations with the foreign states, diplomacy, global outlook, and shared concern against global issues; culture encapsulates the ethos, attitudes, tolerance, world view, etc.; political values include the type of government, democracy, etc. This concept arose as aftermath strategies of nations post the cold-war era when peace was dawning upon the world. Ever since Nye came up with this concept, nations and its leaders across the globe have increasingly embraced this idea to enhance their sway globally utilising their heritage and values. However, as the world entered the 3rd millennium, the definition of soft power was widened  to incorporate the latest aspects of global affairs. Now the definition has moved away from the traditional criteria that include traditions, customs, ancient history, old monuments, statues, and ancient literature. Now it encompasses the rule of law, crime rate, constitution, security, constitution, traditional media, tourism, films, fine arts, social media education, values, character and trust in society. Not just arts and history, almost every aspect of the nation is being watched by other nations.

How is soft power measured? 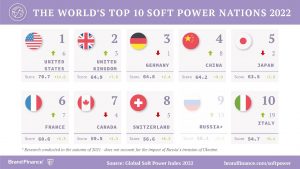 the Global soft power Index. It uses the same criteria that we have seen in the extended definition of soft power. As per its rankings in 2021, Germany topped the list, followed by Japan and the UK. The USA is at 6th and sliding down quicker than the rest and China ranks 8th. Unfortunately, India slid further down to stand at 36th rank, down from 27th rank the previous year, the reasons for which we see later in the article.

India: A repertoire of Soft Power

Right from ancient times, India has been the epitome of soft power. Ashoka, Buddhism, Jainism, Ancient universities, etc. have immensely contributed to the assertion of India’s soft power globally. Even post the independence, India had always carried the halo of soft power along with it, so much so that Sirimavo Bandaranayake, the erstwhile leader of Sri Lanka, once famously remarked that India is the hope of third-world countries. Even today, India wields a wide range of soft power elements, such as

Are we Encashing it?

So far, we’ve learnt about India’s rich repertoire of soft power credentials. But the question is, are we utilizing it? Have we been able to assert it?

Let us recollect what the famous Chinese diplomat once remarked, “India conquered and dominated China culturally for 20 centuries without ever having to send a single soldier across her border”. But a few decades later, China stormed into the world’s top 10 in the soft power index 2021 (released by Brand Finance agency), and India languishes at 36th position in the same index. Agency cited the growing civil unrest and agitations in India as the primary reasons behind India’s slide down in the rankings. India’s dismal record in the assertion of its soft power reflects in many others failures in the recent past. India’s inability to win the security council’s permanent membership, NSG membership, arrive at a permanent solution for India’s food subsidies and concede the sway over India’s neighbours to China, etc., have been highlighting India’s inability to encash its repertoire of soft power.

Why are we falling behind?

Soft power isn’t something what we have, but what others think of us. According to the 2013 Pew Global Attitudes survey, only 46 percent of Americans have a positive impression of India.

With the growing focus on assertion of soft power by the countries, the Indian government has taken several initiatives to not fall behind in the race.

What Needs to be Done

To conclude, India should refine and retune its soft power credentials to untap its true potential and to resurrect its national image. Its spirituality and ancient wisdom should be taken to all the corners of the world. Its shortfalls or anomalies in governance and socio-political affairs should be addressed to claim its due role in the geo-politics. If it could get these things right and combine them appropriately with its growing economic and military might, it can wield the potential to take itself to higher pedestal and project itself as the ‘rising global soft power’, that would ultimately help it to march towards becoming 21st century’s super power.

Explained: Amid Trump-Fed chairman tension, a look at govt-RBI relations in India

This article analyses the relation between RBI and Govt in the backdrop of tension between Trump and American central bank. This news is related to the topic, Indian economy of GS 3. This news is [Read More]

The pandemic and subsequent lockdown will affect the Indian economy drastically which was already reeling under pressure. At the same time, the states have to increase their spending to combat the outbreak. The centre is [Read More]

Hello!!! The following are the ‘Previous Years Question Papers’ for Preliminary Examination (Prelims). We would genuinely urge you to go through these papers periodically. This is necessary to check whether your preparation is in line [Read More]