Plastics have become part and parcel of our lives, asserting their presence in almost every sphere ranging from grocery bags to water bottles to sandwich wraps. But our quest for convenient, flexible, and cheaper material for catering to our daily needs has gone a bit too far to the extent that plastics, more particularly single-use plastics, have started taking a toll on the health of humans and the Earth as well.

What are single-use plastics?

As the name rightly indicates, they refer to plastic items or products that are used only once before being discarded. The life span of their utility is short, which is limited to a single use. In today’s world, single-use plastics account for 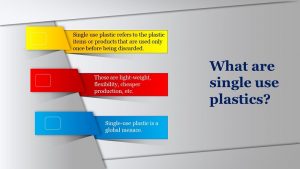 more than half of the total plastic production in the world. Due to their litany of inherent advantages like lightweight, flexibility, cheaper production, etc., they are employed in almost every sphere of life, ranging from packaging items to food trays to earbuds, etc.

A material that is manufactured to last a long time and to be reused is discarded and rendered unusable just after a few minutes or hours. The single-use plastic is a global menace, especially in countries where the collection and recycling infrastructure of plastic waste is poor and inadequate.

Since the dawn of the second half of the 20th century, the production of plastics has outpaced any other material. Recently, as the world was shifting from durable plastics to single-use plastics, here are some of the worrying trends as reported by the United Nations Environment programme.

As we have discussed above, since the 1950s, plastic production has outpaced every other product in the world. Unfortunately, much of the plastic that is produced is destined to be discarded or thrown away just after a single use. Consequently, more than half of the plastic produced in the world could be deemed single-use plastic. A majority of this plastic waste is generated from regions in Asia, whereas much of the production happens in America and the  EU in terms of per capita.

The dual effect of exponential production of plastic, more particularly single-use plastics, and the utter poor waste handling infrastructure have combinedly resulted in the accumulation of plastic waste in India. A recent study found that India produces around 11.8 million MT annually and imports another 2.9 million MT. It is a gigantic problem for India as only 40% of the plastic waste is being collected in India. India’s per capita plastic generation is 4kg.

Adhering to the clarion call given by the honourable prime minister to phase out single-use plastics in India, the Ministry of environment and climate change (MoEFFC) has notified Plastic waste management rules in 2021. Under this notification, recently, the government has notified certain single-use plastics to be banned with effect from July 1st, 2022. This notification has banned the manufacturing, import, stocking, distribution, sale, and use of notified single-use plastics from the notified date. For effective enforcement of the policy, national and state-level control rooms will be instituted, and a special enforcement team will be constituted to make sure the ban is effective. The states and union territories have been asked to set up border check posts to prevent inter-state transportation of banned items. Parallelly, the government has been undertaking awareness generation measures by involving various stakes holders like start-ups, entrepreneurs, central, state, and local governments, etc.

The main reason that the officials from the concerned ministry have cited is the “difficulty of collection, and therefore recycling”. As these items are extremely difficult to recollect and recycle, the government has decided to phase them out altogether to minimise the plastic footprint in India and thereby preventing plastic-driven adversities as we have discussed above.

The road to rid India of single use plastics and implementation of the ban isn’t a highway. Rather it is laden with many hurdles. Some of which are,

Governments don’t have any magic wand to implement policies with pinpoint perfection. The banned items aren’t going to disappear overnight. But the government shouldn’t lose its zeal and the long-term oversight. It shouldn’t be bogged down by the leakages in the ban. Rather it should strive on strengthening the implementation mechanism and should parallelly work on the following aspects to effectively fight the menace of single-use plastics in India.

Waste management system improvements: The government should build up a state-of-art plastic waste recollection and recycling infrastructure.  Scientific waste management systems, along with circular thinking, help us prevent a future plastic catastrophe in India. In this direction, the government should learn and adapt best practices from around the world and develop;

Promotion of eco-friendly alternatives: To get rid of plastic, first, we need to find alternatives. Industry on its own may not be able to rise up to this challenge. Government has the obligation to provide requisite support to the industry in this regard. Government should establish a synergy between itself, industry, civil societies, and the end consumers to make it a mass mission, for the effective results.

Government should take up initiatives like providing tax incentives, single-window clearances, and seed funding for the start-ups or brownfield establishments in this industry. A fund of funds, dedicated for this purpose would bring an ocean of change. Government can even utilise the academic talent by rewarding the youth that comes up with eco-friendly innovative alternatives.

Social awareness & education: These two are imperative to bring a decisive change in behavioural aspects of the consumer and thereby transformation in the society. A long-lasting change in behavioural attitudes cannot be inculcated through periodic stand-alone awareness campaigns. Rather, the desired culture should be inculcated by packing messages into regular didactic practices and academic curriculums from nascent ages.

Reduction strategies: Rather than totally out-lawing the single-use plastics or other menacing particles, reduction in their utility is another approach towards fighting the menace. This strategy helps in accommodating the concerns of stakeholders who may not be able to come to terms overnight with the changed statutory policies. It would provide the breathing space.

Policy instruments: The government’s policy should be clear and achievable. Apart from formulating policies, the government should also formulate practical pathways to achieve that. It is yet to be seen how the central government manages to implement the ban of said single-use plastics in the absence of feasible alternatives. Also, the policy should establish a synergy between various ministries so as to consolidate and prevent fragmentation of governments efforts.

Foster stakeholder engagement: Before formulating a policy, the policy makers should consult a wide range of stakeholders to factor in the stake holder’s viewpoints. Any policy that doesn’t reflect the public’s acceptance is doomed to fail in the long run. And also, policies would work best when people are engaged and involved in the implementation mechanisms.

What we as citizens can do?

A task like minimizing the role of plastics, which has already intertwined with our daily lives, is a mammoth job whose burden the government cannot shoulder all alone. It needs active engagement from the populace to compliment government’s efforts.

There are some low-hanging fruits for us. These are incredibly feasible things, that we can do to minimise the footprints of single-use plastics. These small behavioural modifications would do wonders in long term. Here are a few.

Public pressure: Pressure from the public can do wonders and may force the government to go green. The story of what has happened in Bali of Indonesia is a great inspiration to the populace across the globe. In Bali, the “Bye-Bye Plastic Bags’’ initiative is a social awareness campaign/movement led by the youth to convince the locals to go green and exert pressure on their local government to follow the suit. Two, teenagers effectively led the campaign for four years to persuade the government to ban plastic bags on the island. Despite the initial reluctance from the local government, the federal government has yielded to the campaign and banned plastic bags on the island from 2018.

Being responsible: Segregating the waste from domestic sources, avoiding littering in public places, abiding by the CPCB’s rules, etc. People should realise the perils of plastics and how their lives are being affected. Minimizing the usage of plastic shouldn’t be for the sake of abiding by governments’ rules, but for the sake of their own lives and the natural environment. People should also be considerate about the voice-less animals, whose habitats are being infested with plastic waste. People should refrain from using water bodies and public places as dump yards.

Plastic isn’t the problem. The problem is what we do with it. That implies that the onus is upon us to be smarter in using this multifarious material. Fortunately, there is a growing number of governments plunging into action to fight the menace of single-use plastics. Rwanda, a poor African nation, has shown the world that with strong determination and effective policy formulation one can phase out some of the single-use plastic items. When a poor nation can do, definitely others too can and should.

During the Union Budget in February, the govt had announced to relax the fiscal deficit target for 2020-21 by 0.5% making it 3.5% of the GDP. The states have also demanded to relax their targets [Read More]

States can have sub-groups among SC/STs, says court

A Supreme Court’s five-judge bench has held that the states should sub-classify Scheduled Castes and Tribes in the Central List to include the “weakest of the weak” for development. Under Articles 341 and 342 of [Read More]

Relevance:  Recently, National Statistics Office has published a report, which says that in the April to June quarter of 2020, India’s GDP contracted by 23.9%, this in comparison to the same period last year. Simultaneously, [Read More]