The Indian National Congress, albeit should be credited for engendering the process of arousing political consciousness and furnished the idea of a nation united by the same problem of economic exploitation by colonialism, it nevertheless was fraught with various foibles right from the very beginning. The mainstream Indian nationalism, which grew under the aegis of the Indian National Congress, failed to encompass all sections of the Indian society and was, in fact, incessantly contested from within the Indian society. This consequently culminated in a spate of alternative visions of the nation, represented by a variety of minority or marginal groups who repeatedly challenged and negotiated with the Congress.

The Muslims were the first ones to challenge this version of nationalism of the Congress. However, the Congress was by no means the only player in this scenario. The colonial state too seemed to have played a very crucial role in engendering the process of growth community identity among the Indian Muslim population and the subsequent alienation of the Muslims in politics. A section of historians are of the opinion that communal tensions were essentially stimulated by a sense of sectional consciousness that was bred and often directly fostered by colonialism, that trumpeted the imagery of such so-called homogeneous communities by means of various devices. Indeed, much of our contemporary notion of religious and caste communities as watertight compartment owes its origin to the colonial discourse.

Role of The Colonial State in The Growth of Muslim Identity

The Muslims did not constitute a homogeneous community right from the beginning but rather one fraught with various differentiations in terms of demographic character and composition, such as sectarian differences between the Shias and Sunnis, linguistic divisions, and economic disparities. The colonial state played a crucial role in conjuring up this image of the Muslims as a homogeneous community by means of neglecting such incongruities, which in turn may be attributed to the needs of administrative expediency. The result was that a section of the Muslim population too began to perceive themselves from the colonial lens as unified, cohesive, and segmented from the Hindus, thereby constructing a Muslim community identity and subsequently the idea of Muslim nationhood. The growth of Muslim identity, albeit cannot be characterised entirely as a response to initiatives from above, but it is nevertheless undeniable that the new institutionalised knowledge of social taxonomy that was provided by the colonial rule and the new public space it created contributed to the creation of such cultural constructions. The census particularly played a very crucial role for it basically constructed the idea of religion as a community that in turn was imbibed into every state structure and opportunity provided by the state, including educational facilities, public employment, representation in local self government and entry in legislative councils. The Indian colonial census is probably one of the greatest evidence of the fact that colonial cognition of Indian society essentially rested on the theme of differentiation. From the very beginning, caste and religion were enlisted as the two fundamental categories in the census, for the colonial authorities were convinced that the two being the most important keys for understanding the Indian society, knowledge concerning them was highly essential for the purpose of ensuring systematic governance. The acceptability of the accuracy of the labels assigned by the census may be attributed to the fact that they were corroborated by statistical data. Historians have drawn our attention to the importance of quantification in the census. The constant emphasis on numbers in the census, according to scholars, may be attributed to the notion of the colonial authorities concerning the ability of the knowledge of numbers to provide an image of manageability of the native situation.

The Indian census, although owes its origin to the British one, yet from the very beginning, the former clearly betrayed some marked differences in terms of content. While the British one concentrated more on economic and demographic issues, the Indian census, having constituted one of the main components of the colonial knowledge-accumulation apparatus, was wider in scope. The difference was probably best manifested in the sphere of religion. Contrary to its virtual exclusion of its British ancestor, religion from the very beginning remained one of the 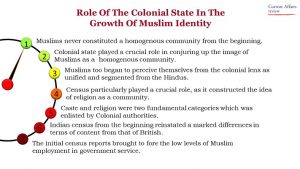 fundamental categories of the Indian census. The census clearly brought to fore the numerical strength of the various religious communities by recording the number of people affiliated to a particular religion, the conversion of Hindus to other religions like Islam and Christianity, and also their reconversion carried out by means of the suddhi ceremonies. The census also recorded the various new religious movements organised by the Arya Samaj or the Brahmo Samaj. Also, the census, by quantifying particular religious communities in an area, echoed the majority and minority status of certain religions in those corresponding areas. The census placed people under religious umbrellas like Christians, Mohammedans, Hindus, Sikhs, etc. these categories were further standardised in the first all India census of 1871. This census clearly betrayed certain glaring foibles, particularly in its record of the Muslim population. The census trumpeted the idea of the Muslims as constituting a homogeneous community and also contributed to the process of imaging of the Muslims as a distinct and hostile other vis-à-vis the Hindu community. However, such a picture clearly belied the reality of circumstances. For, in fact, the Muslim community was a highly stratified one. The Bengali Muslims differed immensely from their north Indian counterparts. Besides, as has been pointed out by some scholars, the Bengali Muslims themselves were divided into three groups, namely the Ashraf, that included the Urdu and Bengali speaking elites; the Ajlafs or the poor peasants who were primarily converts of Indian origin, and lastly the degraded ones, i.e., the Azral.

Religion, it must be noted here, was not only treated as an independent category in the census but also a dimension while describing other categories, the most important one being those related to education or, more precisely, the dissemination of Western education and government employment. The initial census reports, for instance, brought to fore the low levels of Muslim employment in government service that in turn was linked with the low levels of English literacy among them. However, it must be noted here that such reports were essentially based on a limited study of the Ashraf section, whereas the Ajlaf section was plagued by a very different kind of predicament that was engendered by its position as a disadvantaged majority in eastern Bengal for the landlords were primarily high caste Hindus. English education among the Ajlaf section was, in fact, inhibited by their immense poverty rather than their hostility towards the British, due to which they could afford only the traditional cheap institutions like the madrassah. Hence the image conjured by the census of a homogeneous community suffering from the same predicament of backwardness in education and employment was highly erroneous.

The Foundation of The All India Muslim League

The Muslims, although divided along various lines, but there nevertheless existed one common thread linking them, i.e., the sense of a relative deprivation in comparison to Hindus, though it must also be noted that it was perceived differentially by the richer and poorer sections of the community. However, in the course of time, with the increasing political mobilisation of the community, the interests of the latter came to be subordinated to those of the former, that in turn came to be projected as the interest of the entire community. The ideas of Sir Sayyid Ahmed Khan, who initiated a modernisation movement among the Muslims and founded the Mohammedan Anglo-Oriental College in Aligarh in 1875 to realize this, further contributed to this process of political mobilisation of the Muslims. The increasing separatist tendencies among the Muslim population was to a great extent patronised by the British bureaucracy. Mention may be made of the significant role played by Theodore Beck, the European principal of the Aligarh College. He formed in 1888 the Indian Patriotic Association for the purpose of opposing the Congress and gaining government patronage for the Muslims. Also, in 1893 the Anglo-Oriental Defence Association was formed with his encouragement to ensure the checking of the process of the growing popularity of the Congress and organise Muslim public opinion against it. Khan though not an anti-nationalist, but nevertheless favoured a different conception of nation, which according to him, was a federation of communities having an entitlement to different kinds of political rights that in turn would depend on their ancestry and political importance. The Muslims, therefore, being an ex-ruling class, would have a special place within the framework of the new cosmopolitan British empire. This clearly contrasted the Congress’s vision of nation as per which it consisted of individual citizens. The increasing Muslim alienation ultimately culminated in the formation of the All India Muslim League in 1906.

Thus in view of the above discussion, it may be said that the growth of a distinct community identity among the Indian Muslim population and their subsequent alienation from mainstream Indian nationalist politics that grew under the aegis of the Congress, albeit not entirely the product of initiatives from above, as there were other important factors as well that contributed to the process such as the vilification of the Muslims as the other by increasing Hindu mobilisation or the failure of the Congress to appeal to the Muslim population, the colonial state undoubtedly aided by various means such as the census highly contributed to the process. It trumpeted the process of what has been described by a section of scholars as objectification of culture. The census, by showing the changing numerical strength of the various religious communities and their progress in terms of advancement in various fields like education and government employment, provided new arenas of religious competition and tensions. All of this ultimately paved the way for distinct religious identities whereby the theme of differentiation emerged as and still continues to be not only the very nucleus of Indian politics but, even more importantly, has become deeply enmeshed in the psyche of the people.

A Study of the Indian Diaspora: Preliminaries

The migration patterns of the Indian diaspora have been prolific over centuries. Officially denoted Non-Resident Indians (NRIs) or Overseas Citizens of India (OCIs), they comprise the world’s largest diaspora with the highest annual migratory flows. [Read More]

Unemployment In India – A Cause of Concern?

Unemployment is a serious global concern, and even India is not left out of its ambit. The issue of unemployment in India is quite severe because of the continuously growing population of the country and [Read More]

Southern Ocean : A Pool of Ecological Richness and Its Relevance for Global Climate

Despite the fact that there is only one global ocean, the immense body of water that spans 71 % of the Earth is split into specific areas. For a variety of historical, cultural, geographical, and [Read More]