One of the vilest things of human nature is that we often tend to take for granted that which comes easy to us. Rain is one such resource that we all rejoice in but never make an extra effort to capture for the future. Most of it drains into the oceans leaving behind a huge swathe of the population starving for water. With the recent forecasting of NITI Aayog regarding most of the Indian cities being on the brink of hitting Day-zero very shortly, the rainwater harvesting mechanism has gained traction in recent years. Though rainwater harvesting isn’t a modern mechanism, its need has been felt in the present day more than at any other point of time in human history. Before dwelling on the reasons behind this, let us first understand what Rainwater harvesting means.

What is Rainwater harvesting?

It is a technique or strategy for the collection and storage of rainwater, intended to be used for future practical 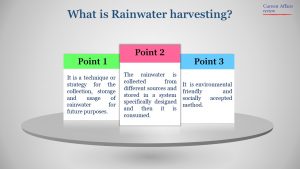 purposes. The rainwater could be collected from any source, such as, from rooftops of buildings, ground surfaces, hill slopes, etc. In most cases, the rainwater is collected from rooftops and hard ground surfaces. Then this collected water is stored in a dedicated storage system which are exclusively built for the same purpose. The stored water could either be used for direct consumption or could be used to replenish the underground aquifers, depending on the purpose for which they have been built. Rainwater harvesting is regarded as one of the most socially accepted and environment-friendly strategies to preserve the water resources on the earth.

Historically speaking, the Water harvesting technique has been an age-old practice. The practice of storing and collecting rainwater for later use can be traced back to ancient times, the Neolithic Age, more specifically. Almost all the ancient civilizations of the globe have evidently been practising one or other form of such techniques. The first such archaeological evidence was traced from West Asia, where cisterns attached to the floors of houses to collect rainwater were found in Jerusalem and Israel.

Coming to the sub-continent, the history of rainwater harvesting can be traced as far back as the Harappan water-harvesting system. Rainwater harvesting structures were found beneath the ground along the Manhar river in Khadirbet of the Kutch district of the Harappan civilization. Another such example can be traced from around 300 BC when farming communities from present-day Pakistan, Afghanistan, and northwest India were found to be practising harvesting of rainwater. Ancient rainwater collection networks can be found at Karle Buddhist caves, the Shivganga tank in Thanjavur, the Veeranam tank in Cuddalore, etc.

India bags the notoriety as the highest extractor of ground water in the world as it annually draws 251 billion cubic meters of groundwater. India banks on ground water to meet more than 80% of its water demand. Estimates say that 85% of the rural and 50% of the urban population in India are dependent on groundwater for fulfilling their needs. As a result,

Above statistics spell a doom and are indicative of the imminent crisis that India is slipping into. To arrest the further worsening of the crisis, its high time India should formulate strategies to restore its fast-depleting water tables. Rainwater harvesting is one of the most inexpensive, efficient, and sustainable techniques to achieve the goal of replenishing underground aquifers.

How much Rainwater can be harvested?

Below, we shall see illustrative theoretical calculation that underlines the massive potential for rainwater harvesting in any place. This procedure can be replicated to calculate the potential for any plot of land or roof top area, factoring-in the rainfall data for a particular area. For example, let’s see Chennai’s case. Consider a plot of size 100 sq. metres. The average annual rainfall in Chennai is approximately 44 inches or 1100 mm.

Even if we assume that only 60% of the rainwater could be harvested, that amounts to 66,000 litres of water being collected over that plot. This volume is about four times the annual drinking water requirement of a 5-member family. Now, we can comprehend the potential of rainwater harvesting if it could be effectively implemented across the nation.

Despite living in the 21st Century, it is bemusing to note that in a country of more than 1.3 billion people and 4100 towns and cities, only two cities- Thiruvananthapuram and Kota, could avail continuous, 24×7 water supply, and all those mega-cities with a population greater than 1 million, get water for only around 3-4 hours a day. This worrisome picture could be attributed to many factors ranging from natural phenomena to anthropological negligence. As the alarm bells are ringing louder, governments at both levels have formulated several initiatives to address the crisis.

It involves scores of activities like construction of harvesting pits, rooftop RWHS and check dams, removal of encroachments and desilting of tanks to increase their storage capacity; removal of obstructions to decongest the channels which bring water from the catchment areas; repairs to traditional storage structures to recharge the aquifers; opening Rain Centres in each district, which will act as a technical guidance centre to the district.

However, even after the lapse of five years and one general election    since its introduction, the Bill still languishes in parliament awaiting to see the light of the day.

Different state governments have formulated different strategies, basing up on their geographical and socio-economic factors.

Himachal Pradesh: All buildings, both existing and new, residential and commercial complexes, spanning over 1000 square meters should mandatorily have rainwater harvesting systems and storage units, proportional to the area of the terrace. All toilet flushes are to be connected to this storage unit.

Tamil Nadu: According to the Tamil Nadu Municipal Laws (ordinance) of 2003, the state government made it compulsory for all public and private buildings in the state to build and install rainwater harvesting systems, or the municipal authorities would build them and recover the costs from the property holder as property tax.

Similarly, many other states like Maharashtra, Madhya Pradesh, Haryana, Karnataka, etc have their own statutes to implement rainwater harvesting schemes in their respective states.

Success stories: Rainwater harvesting is considered the answer to India’s water woes. The practice has been fruitful in most parts of the country. However, some states have experimented with telling effect.

Tamil Nadu: The Rainwater Harvesting (RWH) scheme of the state was a brainchild of the then Tamil Nadu chief minister J Jayalalitha and was launched in 2001 with an aim to replenish water sources and improve ground water levels in the crisis-ridden state. During the launch, the scheme met immense resistance from the people as it mandated all the residential buildings to have rainwater harvesting structures. But two decades down the line, the tables have turned as the scheme had succeeded in increasing the water tables of the Chennai metro significantly.

Rajasthan: With a population of 70 households, Bajeena is a hill village situated 14 km away from Ranikhet in Rajasthan. A traditional water spring, locally called ‘Naula”, is located in the peripherals of the village. Due to the drying up of the water spring for myriad reasons, villagers in Bajeena have been facing an acute shortage of water, especially during the dry season. To find a solution, the women folk of the village have embarked on a mission to construct minor reservoirs on the hill slope to collect and store rainwater flowing down the hill slope. These reservoirs in turn recharged the traditional “Naula”. The next monsoon, this indigenous mechanism worked wonders for the village, and they overcame the water shortages, thanks to the replenished Naulas. (This study conducted by TERI)

The following measures would go a long way in effectively implementing the rainwater harvesting in India and there by evade the impending crisis.

With the clock ticking at alarming & unprecedented pace and most of the Indian cities increasingly getting closer to Day-Zero, it is imperative to look for the sustainable methods of water replenishment. Rainwater harvesting proves to be an excellent strategy in this regard. Since it is simple, affordable, and sustainable, governments and the citizenry should embrace the ancient wisdom & techniques and combine them with modern scientific advancements to make the best use of rainwater. With the per capita water availability falling below 1,700 cubic metres, India cannot afford any more laxity.

Mind the gap: on India’s focus what needs to be done

Since pre-industrial times, human activity has accelerated global warming, long-term heating of the earth’s surface that has raised the planet’s average temperature by 1.1 degrees Celsius. While changes can be seen all around the planet, [Read More]

Still no bullseye, in volume and value

Indian defence exports are showing upward trend in terms of both volume and value. While this is definitely some good news, it still remains uncompetitive globally. The editorial is important for both prelims and mains. [Read More]