When it comes to ancient cultures, philosophy and religion, in most cases, are identical and can hardly be divided into watertight compartments. India is by no means an exception in this case. This article will be looking into some of the very crucial philosophical developments that took place in India during the ancient and early medieval period. The native term for philosophy in India is darshana meaning ‘view’. It is also referred to as anvikshiki, meaning ‘looking at’. Later, however, the latter came to imply logical reasoning.

The early Indian philosophical schools can be broadly be classified into two groups, namely the astika and nastika schools. The former accepted the authority of the Vedas. The astika group constitutes of the six classical systems of Hindu philosophy. The nastika schools, on the other hand, refer to those philosophical traditions which declined to accept the authority of Vedas. While on the one hand these included the religious traditions of Buddhism and Jainism, on the other, there was the Charvaka school.

This school was also referred to as the Lokayata, meaning ‘that which is found among people’. Though it is believed that the tenets of the school were compiled in a sutra composed by Brihaspati, but no such text has survived. Our sole source of information concerning the Charvaka school are its references that are found in the texts of the rival 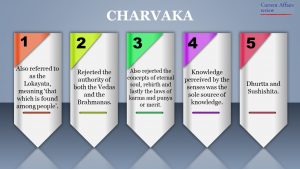 schools. The Charvaka school rejected the authority of both the Vedas and the Brahmanas. They opposed the various Brahmanical ritualistic practices. For instance, the Charvakas questioned the efficacy of the ritual of sacrifice on various grounds. They argued that if it was possible for the food offered to reach the deceased ancestors, then it could also be transferred long distance in a similar manner to hungry travellers. Being essentially atheist in nature, the Charvakas also rejected the concepts of eternal soul, rebirth, and lastly, the laws of karma and punya or merit. Instead, they asserted that body and consciousness were products of combinations of matter. As per them, knowledge perceived by the senses was the sole source of knowledge. We get the reference of two Charvaka schools in the later texts, namely Dhurtta and Sushishita. While as per the former, only four elements, i.e., earth, water, air, and fire, existed; the latter was of the opinion that the soul was distinct from the body. But the soul was nevertheless by no means eternal and rather was destroyed following the destruction of the body.

The term Mimansa implies exegesis or explanation. The two Mimansa schools were essentially concerned with Vedic exegesis that attempted to explain Vedic texts from the point of view of the nature and goals of sacrificial 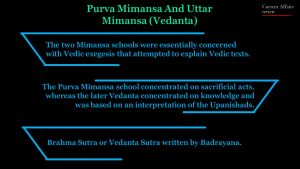 rituals. As far as the philosophers are concerned, mention may be made of Jamini, the earliest known thinker associated with this school of thought. He wrote the Mimansa Sutra. The Mimansa school considered the Vedas to be eternal and concluded their authority on dharma. As per Jamini, the Vedic ritual texts were essentially embodiments of dharma in which dharma held the central position. In fact, in early Mimansa doctrine, the gods were rather irrelevant. However, later Mimansakas did accept the existence of a supreme god. The Purva Mimansa school concentrated on sacrificial acts, whereas the later Vedanta concentrated on knowledge and was based on an interpretation of the Upanishads. As far as the works on Vedanta are concerned, mention may be made of the text Brahma Sutra or Vedanta Sutra written by Badrayana. This text essentially focuses on the concept of brahman and concluded that all things were part of Brahman.

The text most closely associated with this school is the Vaisheshika Sutra, authored by Uluka Kanada, that was written in around the time between the 2nd century BCE and 1st century CE. This text focussed on the concept of dharma which it described as the source of the highest good, and also concluded the authority of the Vedas as being the result of its concentration on the concept of dharma. The philosophy of this school was essentially pluralistic realism. The term Vaisheshika is rooted in the word vishesha meaning particularity. Hence the school aimed to inquire the particularities of the pluralities of things that existed in the world. As per this school there existed seven fundamental categories or padarthas of things, namely substance, quality, action, universality, particularity, a relation of inherence, and absence or negation.

This school primarily concentrated on logic and epistemology. The origin of the Nyaya school is usually ascribed to the writings of Akshapada Gotama, who lived in around the 3rd century BCE. As per this school of thought, the inquiry of something should be engendered by doubts concerning it, the possibility of arriving at a certain conclusion, and the capability of such inquiry in contributing to the process of liberation from the cycle of rebirth. The Nyaya method of argument consists of five stages, namely a statement of the thesis that is to be proved; a statement of the reason for the thesis; an example which will function as a rule that can be utilized to support the thesis; connecting this rule to the thesis; and lastly a restatement of the thesis that has been proved.

The Samkhya school was founded by Kapila. This school is concerned with two fundamental categories, namely purusha, or the spiritual principle, and prakriti, meaning matter or nature. The school is of the opinion that there exists many purushas, each of which is eternal, unchanging, passive, and conscious witnesses. Contrarily prakriti though eternal and unchanging, but at the same time, it is also active and unconscious. The latter is said to have three gunas or qualities, namely sattva or goodness, rajas or energy, and lastly, tamas or darkness. 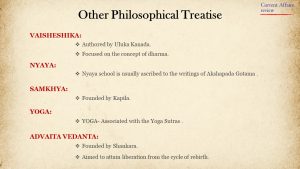 This was another school of Indian philosophy. It is usually associated with the Yoga Sutras, which are basically a manual of yogic practice. They explain the eight stages of yoga, five of which concentrate on training the body, whereas the rest focus on perfecting the self that, culminates in the acquisition of siddhis or signs of success.

Shankara was one of the most important thinkers of the early medieval period. His version of the Vedanta philosophy is popularly referred to as Advaita Vedanta. As per Shankara the Upanishads and the Brahmasutras constituted a systematic, unified philosophy. He concluded the Upanishads to be source of supreme knowledge and Brahman to be the ultimate reality. The latter is nirguna or without qualities in terms of nature and can be described as pure consciousness, unchanging and eternal. He further argued that all change and plurality is only apparent in nature. The Advaita Vedanta school aimed to attain liberation from the cycle of rebirth that consists of realization of the oneness of atman with Brahman.

Indian dance has its genesis in antiquity. The first formal mention of dance in textual form is found in the famous treatise “Natya Shastra”, penned down by the 2nd century BCE sage Bharat Muni. He [Read More]

The provisional figures released by the Commerce Ministry shows that the Indian economy is going to face tough days ahead of the lockdown. The output of the economy has contracted by as much as 6.5%. [Read More]

The U.S. State Department has approved two potential missile deals with India, for an estimated $92 million and $63 million. The first deal is for 10 Harpoon Block II air launched missiles and the second [Read More]