Whenever the thought of Indian independence was contemplated by the west, nobody gave us a chance to survive as a nation. The entire world thought we would perish soon after independence. A British higher official, John Strachey, had once remarked in 1880 that India can never be unified owing to its fragmented ethnicities. Winston Churchill felt Indian leaders were men of straw who weren’t yet ready for independence, and India will be lost if they take up the offices. Their pessimism emanated from the fact that there is not a single instance in the entire history when a colonized nation has managed to evade a chaotic transition after being set free. There was bloodshed in Vietnam and Korea after their liberation. Nations of the former Soviet Union are still reeling under civil wars (Tajikistan & Kazakhstan civil wars). African nations are still bearing the brunt (Hutus v/s Tutsis massacre).

But to everybody’s surprise, India, despite being the most diverse nation, not only managed to survive the transition but has done it with bare minimum friction and is celebrating its 75th year of Independence. The credit goes squarely to the Parliament that stood tall amidst the transitionary turbulence. It remained the fulcrum of nation-building and shielded our republic from a slew of challenges like poverty, regionalism, wars, secessionism, language issues, diversity, social backwardness, etc. Before discussing how it kept the wheels of our republic intact, let us take a short detour to understand its historical evolution.

The Indian Parliament, which is comprised of the president of India, Rajya Sabha, and Lok Sabha, was formally institutionalised after the first national elections of independent India in 1952. Its roots can be traced back as deep as the Indian Councils Act of 1861 and the subsequent acts that followed. Legislative councils that followed the

Montagu-Chelmsford Reforms,1919 envisaged gradually developing representative institutions involving the natives. However, it was only after the passage of the India Act of 1935 that the presence of elected Indian representatives in the legislative councils became significant. However, the transfer of power to the Indian elected representatives still remained a mirage. After the independence, a Constituent Assembly of India was constituted to prepare the Constitution of India, which also worked as a legislature. However, in 1950, with the task of preparing the constitution being accomplished, it ceased to exist as the constituent assembly and continued to serve as the provisional Parliament of India from Jan 26th,1950, till the formation of a new parliament following the first general election.

Fulcrum of the Republic 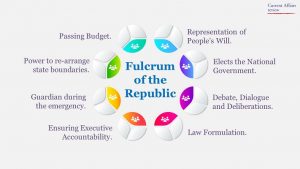 A republic has no meaning if it stops at merely providing a universal adult franchise. How effectively the elected candidates are working, how accountable they are to people, how legitimately they are exercising their authority and power, how efficiently are they expending public resources, how cordially they are taking care of people, and how visionary they are in curating the growth trajectory of the nation, are the things that add substance to the republic credentials of any nation. This is where Parliament is applauded as the fulcrum of the republic. Parliament has inherent mechanisms to ensure that people’s representatives don’t go astray against the will of the people.

Are the spokes of the fulcrum coming apart?

Decline of parliament as an institution

In the present times, parliament is renegading from playing the role that the constitution envisages it to play. Few of its failures are;

Decline of processes that constitute parliament

What is worrisome is the fact that not only the parliament is wilting away as an institution, but also its constitution itself is increasingly becoming questionable. Let’s see the reasons behind it.

While the former set of drawbacks stifles parliament as an institution, the later ones shatter the pillars of the institution.

However, in addition to the above-mentioned woes, the parliament is also waging a battle against several impending challenges. Still a vast portion of the Indian populace is illiterate. And when it comes to political illiteracy, a majority 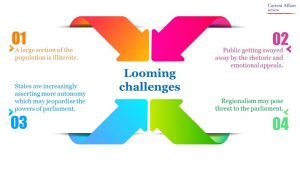 of Indians fall in this bracket. This results in the public getting swayed away by the rhetoric and emotional appeals than by the logic, rationality, and the real issues they are riddled with. This reflects in persons of low calibre flooding the parliament, hampering its sanctity. Also, with growing independence and stature, states are increasingly asserting more autonomy which may jeopardise the powers of parliament. As more and more subjects revert to the state list, there may be a decline in the role of parliament as the policy formulator. Further compounding the threats, the constantly boiling regionalism may pose threat to the parliament as a fulcrum of the integrity of our republic. There is a litany of other challenges, such as language issues, external threats, regional inequalities, secessionist movements, etc., that parliament may have a hard time contending with.

The Resurrection of the Shrine

The disintegrating fulcrum needs an overhaul. A lot of these recommendations may sound pedantic, aimed at disciplining MPs. But, the purpose of the resurrecting measures isn’t to regiment MPs but rather to restore the waning sanctity of what is regarded as the shrine of democracy.

While the government is planning to expend 971 crores in constructing the new Parliament building, we should be cognizant that it will remain a mere structure if we do not reform it in the first place. Reforms must emanate from within to prevent Parliament from becoming a rubber stamp. The suggested reforms aren’t herculean and can be executed just with the stroke of a pen. But, for the pen to move, the public should be vigilant and hold their representatives accountable. Parliament has served well for many decades, without an iota of doubt. But it began to crumble over the past couple of decades. Hence, it needs an urgent overhaul to extend its life as the fulcrum of our republic and to restore the faith in the world’s largest institution of democracy – The Indian Parliament.

Cyclone: A Detailed Analysis of the Phenomena

Earth’s atmosphere is a distinct feature that makes it unique among all other planets in the solar system. The atmosphere, which consists of different layers and variations of gases, has a constant interplay with each [Read More]

Can our Parliament meet virtually?

The editorial looks into the question if the Parliament can virtually meet. The Budget session was adjourned ahead of schedule so it is unclear if the Monsoon session will be called during the pandemic. Click [Read More]

According to a report presented in Parliament, an amount of more than 5000 crore remain unspent under the MPLAD scheme. Under this scheme MPs can recommend a choice of his works in any district in [Read More]