National Monetisation Pipeline (NMP), seen in the news recently, launched by the Finance Minister of India Nirmala Sitharaman, in the presence of NITI Aayog Vice Chairman Dr. Rajiv Kumar, CEO Amitabh Kant, and secretaries of Union Line Ministries. Through the core assets of the central government, over four-year period from 2022 to 2025, the NMP has estimated aggregate monetisation potential of about Rs. 6 lakh crores. It is said that NMP is in line with the Prime Minister’s Strategic Disinvestment Policy – where the government will be retaining its presence only in very few identified areas along with the rest utilizing the private sector. Example – investments by private firms can be done under the plan, for fixed return by using infrastructure investment trusts. It can also operate and develop the assets for a certain period before giving it back to the government agency. 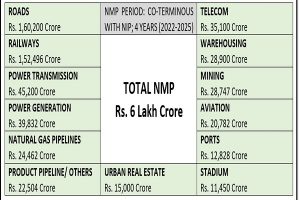 Why Such Asset Monetisation is Required?

The national Monetisation pipeline has been considered a tactical move to deal with the adverse fiscal impacts of the economic slowdown of India, heightened by the ongoing global coronavirus pandemic – resulting in severe GDP contraction, rising fiscal deficit and rising levels of public debt.

Monetisation of the assets is seen as a much-needed source of non-debt budgetary capital receipts.

The privatization or sale of government majority shareholding and the transfer of management control – attempted since 1999 gradually weakened after few successes.

The PPP started in the year 2010, struggled due to rigid contracts, governance structures being unsupportive and the rules directed at “zero risk” decision making within the government, which damaged the public and commercial practices convergence.

Finance Minister Nirmala Sitharaman, in May 2020, included “privatization” of non-strategic PSUs as an investment option. Nevertheless, as we have seen, the privatization of Air India became a victim of economic disruptions caused by the global pandemic.

India has been in need of new infrastructural facilities across every profitable and conceivable sector in India. Improving such infrastructural deficit, relative to other large countries, has been India’s focus – a requirement of financial resources is the need of the hour. For any country, there are two constraints associated with building new infrastructure – access to cheap capital and capability to execute, where government and private firms can take up multiple projects simultaneously.

These challenges are addressed by NMP and will help the government receive upfront capital access via the parties interested. The investors will be responsible for the maintenance and operating of the monetized assets, generating cash flows, as well as the creation of technical and human resource capacity in the infrastructural sector. Such a resource augmentation cycle helps the government invest immediately in new infrastructure without waiting for allocations of annual capital budget expenditure. The government believes that such spending from the proceeds of NMP will boost economic activity. In fact, some analysts are of the opinion that the government, through such a Policy, has found a suitable model for infrastructure development.

The brownfield assets will help in the creation of new greenfield assets’ execution capacities – considering it to be productive and innovative. The government is monetizing the rights of maintaining and operating the assets, and not its ownership rights. Each of the Monetisations will reflect contract design, terms and conditions, and pay-out structures.

It is believed that the NMP will be useful for the Indian Economy. However, there have been criticisms regarding the same. To begin with, criticisms have been made regarding risks associated with executing such a large program.

In addition to this, another criticism associated is taxpayers who have paid for the public assets once, are to pay again to the private parties to use them. There has been no introduction of new financial liability to the taxpayers by the NMP – considering it to be a better way for generating operational revenues.

Furthermore, another criticism that came up is that there may not be any investor interest – a fear which seemed baseless. India had been an investment destination, where two of its best FDI years 2019-20 ($74 billion) and 2020-21 ($81billion).

There are concerns that the bulk of assets offered under NMP will be cornered by the few business units. Some criticize that the assets owned by the government allocated to the private units are subject to political influence. On the contrary, recent experiences have suggested that there exists a clear and transparent auction between public-private partnerships. In addition to this, there also exists a clear understanding of the risks and the payoffs, as well as it is like an open field for all the interested parties. The potential investors are provided with four-year visibility, who can decide what they are interested in and what time, thereby preparing suitable strategies to win bids transparently.

It has been mentioned that NMP does not address structural issues. The structural issues include legal uncertainties and the absence of a deep bond market which are likely to hold back private investments in infrastructures.

Criticisms have also been made that leasing out railways, airports, roads, and public utilities to private units could put the burden of price rise to the consumers. Poor outcomes for the consumers might happen if the government simply surrenders control of the public units to the private investors without taking the necessary steps to promote greater competition. Most probably, consumers are unlikely to be hurt by the price rise. To begin with, operational infrastructure assets such as the natural gas and petroleum pipelines, airports, power transmission lines, port jetties come along with a regulated tariff which is determined on the cost-plus basis or at the time of getting the service license via competitive bids. The tariff-regulated government-owned asset would be competing with the leased asset stock. Any additional rehabilitation and development work by the lessee would be on terms that are regulated by the concerned administrative department.

The NMP success will depend upon the demand of the brownfield government asset by the private investors. Owing to stringent conditions of the government, disinvestment projects such as the sale of Air India was not much of a success in attracting investors. This sale had a condition that buyers to possess a certain minimum amount of net worth and be invested in the airline business for three years. Many Analysts were of the opinion that government’s expectations of buyers were too much for payment for such a debt-ridden airline. Therefore, the asset pricing and terms of sale will thus determine the interest level of the private investors for the leased assets under NMP.

In the past, various doubts by various people have been raised with regards to asset allocations to particular business groups. This time, the process which the government will adopt to allocate assets may come under proper inspection. Subsequently, there might arise a demand for an open, transparent and competitive auction of assets.

The infrastructure expansion plan would be successful depending upon the various stakeholders playing their role – state government, their public sector enterprises and the private sector. In this backdrop, a recommendation has been made by the Fifteenth- finance commission to set up a high-powered intergovernmental group for the re-examination of the fiscal responsibility legislation of the Centre and States.

The global economic condition is extremely volatile and uncertain, and risks might aggravate in India with the third-wave of pandemic. Therefore, raising financial resources upfront is a bold, confident and constructive policy statement. It is basically, giving a statement to the world that India is open to business, along with firmly protecting its citizens and public exchequer.

The government has built assets, but private units are capable of putting them to more efficient use. Infrastructure project management is not an easy task and hence, NMP selects those private participants who have a record of taking up such tasks and also successfully accomplishing them. There exist large infrastructural assets and a handful of industrial groups that can manage them. NMP has been designed in such a manner that realization of value from the assets by private sector entity takes place. This may lead to higher pricing of the new business practices to acquire high Return on Investment from such assets. Hence, it results in a higher cost for usage of services by the consumers. Even if such a situation occurs, once the government hands over the assets, non-interference in the working of private firms would be expected.

NMP should not just be viewed as a policy for the government to earn revenue – but also to be viewed as building many more new assets for New India. If implemented well, along with other policies, India could be hugely benefitting from it.

The Why And What? Aspirational Districts Programme- Economic Survey 2017-18 reported that the Indian economy grew at an average rate of over 7.5% between 2011-2016. Similarly, the World Bank projected that Indian economy would be [Read More]

The encyclopedia Britannica defines elections as a formal process of selecting a person or accepting or rejecting a political proposition by voting. Some would argue that elections are an opportunity for voters to hold the [Read More]