As with any other technology, nanotechnology, in simple terms, can be defined as the study and manipulation of matter that is of a size ranging from 1nm to 100nm. Just to keep things in perspective, one nanometre is roughly the size of 10 atoms placed side-by-side. A human hair is about the size of 80,000 to 100,000 nanometres in diameter. So, nanotechnology deals with understanding, controlling, and employing the matter, whose one or more dimensions are less than the size of the hair follicle for practical purposes. But what is so significant about nano-sized particles? Why are we studying matter at the nano-scale when we have enough knowledge of the same matter at the macro-scale? Is there any difference between the matter of macro and micro scale in terms of their properties? The answer is a resounding Yes!!!

The matter at the nanoscale exhibits different properties, both physical and chemical, compared to its properties at the macro-scale. Increased magnetism, increased reaction, more electric conductivity, increased light reflectivity, increased strength and durability, etc., are a few of such differences. Let’s take an example. Gold at normal scale is yellow in colour. But when you reduce it to nanoscale, it appears red owing to the change in its light reflectivity. Similarly, soda drinks are packed in the aluminium can. But, if those cans are made of nanoparticles of aluminium, they would explode.

Why is it so exciting?

Basically, nanotechnology is significant in two aspects. Firstly, its size. Nanoparticles are so small entire human population could be made to fit inside a matchbox if each person on Earth was the size of a nanometre. When we could study particles of such scales and then could manufacture anything of such scale with precision, that would work wonders for future human endeavours. Lesser size is an advantage in any domain and technology. Today, transistors, which are the backbone of electronics, can be made of sizes as small as 1nm, thanks to nanotechnology. And secondly, the entire new set of properties that the existing matter offers when they exist in nano sizes. It’s like adding up to the existing repertoire of 108 elements.

Nanoparticles, as we have thoroughly discussed above, are so small that they are impossible to be visible to the naked eye. So, how exactly scientists could observe it?

Scientists have been able to observe nanoscale materials using instruments such as the scanning electron microscope (SEM), the transmission electron microscope (TEM) since as early as the 1930s. The scientific community had a fair bit of idea about nanoscale materials. However, it wasn’t until the year 1959, when the American physicist and Nobel laureate Richard Feynman gave a historic seminar on nanotechnology, that nanotechnology gained the worldwide attention. Later, in 1974, a Japanese scientist, Norio Taniguchi, coined the term “Nanotechnology” for the first time. Later in the year 1981, with the advent of ‘scanning tunnelling microscope’, the dawn of proliferation of nanotechnology had set in. A Scanning tunnelling microscope enables scientists to observe 3-D images of matter at the atomic level and allows them to manipulate particles and atoms at nanoscale. Hence, the decades of the 1980s and 1990s could be regarded as the dawn of nanotechnology.

An indispensable part of modern lives

Decades of research and development in this novel field have resulted in both expected and unexpected benefits for humankind. Already there are more than 800 products commercially available in the market that are produced involving nanotechnology. It is helping to enhance the characteristics of products across a wide range of fields such as food safety, health care, textiles, etc.

It is pertinent to note that the application of nanotechnology could be classified into two phases, i.e., pre-pandemic (the 1980s to the first two decades of the 21st century) and post-pandemic (the recent advancements). 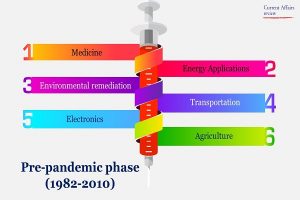 During this phase, being a nascent technology, nanotechnology has made humble yet significant strides in various spheres. A few of those are;

Electronics: Nanotechnology has been a game-changer in electronics enabling faster, smaller, and more portable devices.

Agriculture: Like electronics, agriculture is one such sectors that could be hugely benefitted by the application of nanotechnology. A few of those are;

Although this is just a continuation of the first phase, the sheer scale of path-breaking advancements happening in this phase is worth making a distinction. The pandemic has proved to be an opportunity in the crisis, as the nanotechnology-based drugs have made huge strides in treating covid. 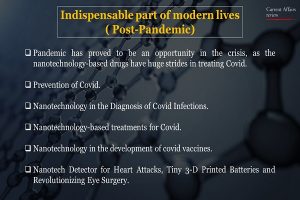 Nanotechnology in aid of covid-treatment

Prevention of covid: A filter based on single or multiple layers of electrostatically charged polyvinylidene fluoride (PVDF) nanofibers deposited on a mat substrate attached to masks has effectively prevented the covid virus from getting inhaled.

Nanotechnology in the Diagnosis of Covid Infections: The current standard technique for covid detection, i.e., RT-PCR, is a highly resource-intensive process. The unique properties of nanoparticles, such as their high surface-to-volume ratio and special optical properties, have resulted in their application as rapid, accurate, and inexpensive diagnostic systems with relatively less sample size and laboratory equipment.

Nanotechnology-based treatments for Covid: The latest nano-therapeutic materials have improved the efficacy of covid treatment. The polymeric nanoparticles with swift and high mucus penetration features and the development of biodegradable and non-toxic nanoparticles that could be used in the lung with minimum pulmonary toxicity have cumulatively helped treat the covid to a great extent.

Nanotechnology in the development of covid vaccines: Nanotechnology-based vaccines, labelled nano vaccines, have been developed using nanoparticles to dispatch antigens into the human body. Nanoparticles have the ability to target both adaptive (T cells, B cells) and innate (macrophages, monocytes, and neutrophils) immune systems at the molecular level. The COVID-19 mRNA-based vaccines developed by BioNTech-Pfizer and Moderna are encapsulated in positively charged lipid nanoparticles (LNPs) for effective delivery.

A Nanotech Detector for Heart Attacks: This could truly be a ground-breaking invention if the ongoing research succeeds.

Tiny blood stream nano sensors chips sense the signs of possible heart attack and warn the persons on their smartphone about the impending threat.

Tiny 3-D Printed Batteries: This could revolutionize the energy sector as the researchers at Harvard University announced last year that they are well on course to develop 3-D print miniature batteries that are about 1mm in size.

Revolutionizing Eye Surgery: Scientists at the Multi-Scale Robotics Lab (Switzerland) have successfully developed a magnetically-guided micro-bot inside the eye to carry out precision surgery. The researchers demonstrated the viability of the technology in tests on rabbits.

A double-edged sword: boon or a curse?

As with the tryst with any new technology, even nanotechnology poses a few risks and uncertainties. As investments keep pouring into nanotechnology, concerns regarding ethical, health and environmental aspects are being raised by various sections of people.

As we have learned above, the physical and chemical properties of nanomaterials differ drastically from those of normal-sized materials. Consequently, the pace of risk assessment and testing needs to align with the technology’s spread, more particularly for the reason that nanotechnology is exponentially being used in consumer goods.

How Can India Benefit from Nanotechnology?

India boarded the Nano revolution early in the 3rd millennium. It made a humble beginning with an investment of 70 crores. In 2007, the government instituted a five-year program termed ‘Nano mission’ with a budget of 25 crore USD. The efforts have borne fruits as India posted well over 23,000 papers in nanoscience in the first five years of the mission. By 2013, India ranked third in terms of the number of papers published. 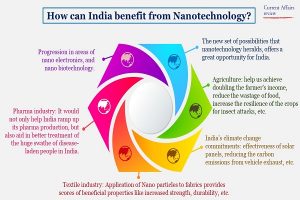 One possible way to bridge India’s abundant pool of resources and the ever-growing demands is to tap the services of nanotechnology. The new set of possibilities that nanotechnology heralds offer a great opportunity for India. Its scope in India includes sectors like;

The last couple of decades, India has witnessed a wide-scale progression in the areas of nanoelectronics and nanobiotechnology and is well on course to venture into many other sectors. However, a few factors, as listed below, have been preventing India from untapping its true potential:

Nano technology institutes at places like Delhi, Bombay and Kolkata.

Nano mission initiated by DPT of science and technology through DBT, ICMR, and Centre of excellence in nanoelectronics.

Thematic Units of Excellence (TUEs) to play a major role in product-based research in nanotechnology.

Visvesvaraya PhD Scheme initiated by Ministry of Electronics and Information Technology aimed at enhancing the number of PhDs IT Enabled Services sectors in the country.

Nano mission: GOI had initiated the mission way back in 2007 with an outlay of 1000 crores to be spent on various sub-missions

ICONSAT 2020:The International Conference on Nano Science and Nano Technology (ICONSAT) is a string of biennial international conferences held in India conducted by the Nano Mission, under the aegis of the Department of Science and Technology (DST).

Factors like demographic dividend, cheap labour, emerging manufacturing industry, etc., have cumulatively handed India a great potential edge in nanotechnology. However, bottlenecks galore are on India’s way to encashing its inherent advantages. India needs to take up the following measures to overcome these bottlenecks;

Over the last two decades, India has achieved many milestones in the areas of nanoelectronics, nanomaterials, and nanobiotechnology, and many are yet to be conquered. Though nanotechnology is all about ultra-small, it has elephantine potential to better the lives and economy of India and the world. We have already been using many of its products that have already been path-breaking and are promising more in the future, particularly in the fields of medicine, electronics, and energy. However, as with any other emerging technology, nanotechnology is laced with uncertainties. A thorough long-term study, international collaboration, and an effective regulatory regime could herald an ocean of new possibilities for the world.