Aerial warfare technology has come a long way from bows & arrows to fighter jets to missiles to military drones in the 21st century. Ongoing Ukraine’s defence against the Russian invasion has brought to the notice of the world the undeniably increasing role of military drones in modern-day warfare, as their drones have effectively kept Russian invading forces at bay and have inflicted heavy costs upon the Russian arsenal. The fresh footage released by the state department of Ukraine, showing the US-supplied Kamikaze Drones blowing up the Russian tanks, admittedly underscores the decisive role of drones in 21st-century warfare. Military drones not only help the troops with their spying abilities but also provides precision firing upon the enemy targets with relative ease and accuracy. Owing to their multitude of abilities, they have been deployed with telling effect in many wars such as the US-Vietnamese war, Yom Kippur war, Libyan war, Syrian war, etc. Before we make an effort to know about their multifarious utility in modern warfare, we shall first discuss what drones are and their types. 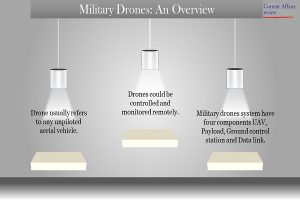 The term drone usually refers to any unpiloted aerial vehicle. These can operate without the presence of any pilot onboard and hence are termed unmanned aerial vehicles. These can be as large as an airplane or as small as your palm. They operate with various levels of autonomy ranging from remotely controlled to total autonomy using their onboard sensors and computers. As they can be controlled and monitored remotely and can be flown at various altitudes, distances, and terrains, they make perfect candidates to be employed in military operations. The military drones carry out a wide range of operations and are rightly regarded as force multipliers.

How are they operated?

Military drone systems are essentially comprised of four components i.e., UAV which is the heart of the system and possesses fixed wings, or either a single or multi-rotary fans built for flight; Payload, which ranges from medical aid to ordnance; Ground control station, which can be user-controlled or operated via satellites is capable of controlling flight payload, sensors, mission planning and tethering the data link system of the drone; Datalink, that acts as the transmission centre allowing the drone to communicate with the ground operator typically utilizing radio wave technology. 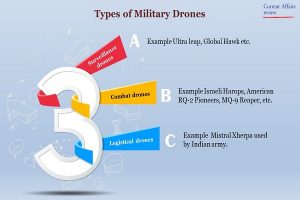 Drones can be classified on basis of several criteria. However, confining to our point of discussion, drones in military operations can be broadly classified into three types;

Evolution of Drones: A Historical Perspective

Albeit drones have only recently hogged the limelight, particularly after the shooting of Iranian major general Soleimani, they have a lengthy history that dates back to the 19th century, when Austria attacked the Italian city of Venice on July 15, 1849, with balloons laden with explosives that were controlled by timer-set fuses. Although balloons were far away from being called Drones, the basic idea wasn’t too far away.

Until the end of WW-2, UAVs aka Drones, were largely confined to the role of ‘flying bombs’ that crashed upon the target sites. One such famous example was the US navy’s UAV project in 1944 that retrofitted B24 bombers with remote controlling mechanisms and was unleashed upon the German bunkers. The most infamous case of WWII-era UAVs was the German V-1 “flying bomb,” which wreaked havoc upon cities of allied nations. Even during the early cold war, much of the attention was paid to developing intercontinental missiles as they had single-headedly tilted the balance in favour of missile-possessing nations. It was not until the US-Vietnam war in the 1970s, when the US had lost many of its fighter pilots, that America started developing the drones to fill the shoes previously worn by manned aircrafts. Henceforth, UAVs began to undertake roles traditionally undertaken by manned aircraft and hence were called “remotely piloted aircraft” (RPAs). This tweak in lexicon marks a paradigm shift in notion from the world war era label of “flying bombs” to a force-multiplying platform. During the same period, the utility of UAV drones was taken to the next level when Israel used them for reconnaissance during the Yom Kippur war in 1973 against Egypt. Inspired by this, the US has borrowed Israeli technology and developed its own drones, named the hunter and the pioneer in the 1980s, which made their combat debut during the Gulf war. Since then, UAVs have increasingly become an indispensable part of modern warfare. After the successful demonstration of the effectiveness of UAVs during the gulf war, modern militaries began to invest in the research and development of combat UAVs. Post the 9/11 attacks on the USA, America had been deploying them at an unprecedented scale to exterminate terrorists and adversaries of Washington in the Middle East and to destroy terrorist camps and bases.

The 21st-century military operation like the Afghan war, Iraq war, Syrian war, etc., bear testimony to the widening utility of the drones on battlegrounds. According to a 1993 congressional report, the Pioneer drone has proved to be the game-changer during the desert storm against Iraq operation during the gulf war. They rendered similar services during the Libyan crisis and Azerbaijan’s military operations during the 2020 Nagorno-Karabakh conflict. Also, they are widely being deployed by Ukraine with a telling effect against the Russian forces. Why have UAV drones garnered such a high reputation? What makes them so lethal? It largely boils down to the wide range of roles they play in a war, which we shall discuss in brief.

How they edge ahead?

Drones that have been used moderately till the dawn of the 21st century are now proliferating at an unprecedented scale the world over. They have almost become an integral part of the military operations of many countries, particularly like US, Russia, Turkey, China, the UK, etc. But what has triggered their exponential rise? What gives them such an edge over their counterparts? Let’s understand. 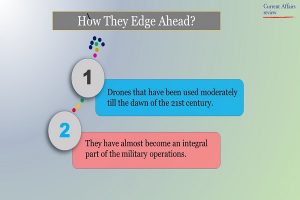 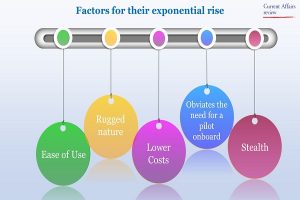 So far, America has enjoyed the monopoly over military drones. But in the last decade, the world has been catching up fast with the USA. Countries like China, Russia, India, Iran, etc., have taken giant strides in this direction. This implies that major military powers have decided to increasingly integrate drone systems with their military arsenals. The USA, being the front runner, has already undertaken trials to integrate drones with its aircraft carriers. China has already begun to pour in investments in R&D, and India has been procuring a great number of combat drones in the recent past. All these latest developments reassert the fact that Drones are here to stay, and their graph is only destined to go upwards.

However, it is unwise to think that UAV drones are going to replace conventional fighter jets. Drones, as of today, can only track slow-moving targets like vehicles or individuals on the ground or stationary targets like military installations, buildings, and other infrastructure. They haven’t yet evolved to a point where they could engage and fight incoming threats like missiles and fighter jets. This job is still the privy of conventional fighter jets and AWACS. Sensors cannot be a substitute for human agency, at least as of today. Modern air warfare, particularly the one like the Abhinandan Varthaman’s dogfight episode, demands instant decision-making, prudence, wisdom, and a few other skills that Artificial intelligence currently lacks. Turkey has made a positive stride in this direction as its UAV had detected and attacked Haftar’s forces in Libya in 2020 with its artificial intelligence without ground command, as reported by the UN Security Council’s Panel of Experts on Libya. It is regarded as the first totally autonomous drone strike ever.

Despite the inherent drawbacks of drone technology, the nations are going to stack up a wide range of drones in their arsenal in the coming decades. With the progress in Artificial intelligence and sensor technologies, the deployment of drones in the combat arena will see an exponential rise. Keeping a tab on advancing UAV technology and its global proliferation, it is time to start thinking about the future strategic implications of the platform. It is imperative for the global community to reach a consensus under the aegis of the UN regarding the deployment of Drones, and there should be a binding international law to ensure that drones don’t violate the existing international laws.

The conception of privacy as intrinsic to the individual and society has evolved over the years. Various international organisations and scholars have defined it in different ways – some emphasizing upon its social value and [Read More]

Drones, in aid of India’s growth

Technology is exponentially changing the face of the world in the 21st century. UAVs/drones are one of the front runners amongst such technologies, which are increasingly gaining traction over the past decade. A host of [Read More]