The medieval period in India witnessed certain significant developments in the field of art and architecture. This will be a two-part article, whereby while in the first article we will focus on the architectural developments of the Sultanate period, the second will be looking into those of the Mughal period. The coming of the Turks in India and their consequent establishment of the Delhi Sultanate during the 13th century is undoubtedly one of the most important landmarks of Indian history, which had an immense impact on different spheres of life, art and architecture being no exception. The architecture of this period, just like its other cultural counterparts like literature and music, clearly echoes the trend of mutual rapprochement and mutual adjustment, which, albeit took place very slowly, between the apparently irreconcilable monotheistic Islam and polytheistic Hinduism that was initiated during this period. However, this cannot be held as tantamount to the end of conflict entirely but rather as the parallel movement of conflict and rapprochement that had both setbacks under certain rulers in specific regions and also faster developments under other rulers.

Houses to live in and places of worship were two of the primary concerns of the new rulers. For the purpose of the latter, initially, they converted the temples and other existing buildings into mosques. Mention may be made of the Quwwat-ul-Islam Mosque located near Qutb Minar in this regard, which was originally a Jain temple that was later converted into a temple dedicated to Vishnu. Nevertheless, soon the Turks embarked on the process of constructing new buildings for which they employed indigenous craftsmen such as stone-cutters, masons, etc., who were renowned for their skill. In addition to this, some master architects came to India from West Asia, who too contributed to the process. The Turks initiated the practice of using the arch and dome, which, however, it must be noted was neither a Turkish nor Muslim invention. Rather it was borrowed by the Arabs from Rome by means of the Byzantine empire. The usage of arch and dome indeed had certain advantages. For instance, there was no longer the need for numerous pillars to support the roof, and this paved the way for the construction of large halls with a clear view. These acted as places of assembly which proved to be convenient both in mosques and palaces. However, the arch and dome necessitated the use of strong cement for holding the stones in place. For this purpose, the Turks used lime mortar in their buildings. Thus, this period witnessed the initiation of new architectural forms and the usage of superior mortar in northern India.

As far as decoration is concerned, this period witnessed the prevalence of geometrical and floral motifs that were combined with panels of inscriptions containing verses from the Quran, contrary to the earlier human and animal figures. Thus, the Arabic script itself was transformed into a form of art, and this combination of these decorative devices was known as Arabesque. However, it must be noted here that the Turks also freely borrowed various Hindu motifs such as the bel, bell, swastika, lotus and others. The Turks also used colour in their buildings. Thus, the usage of red sandstone and also that of yellow sandstone or marble, the purpose of which was decoration and showing off the colour of the red sandstone, is noticeable during this period.

Among the various buildings constructed during this period, the most important and magnificent one is undoubtedly the tower or minar located adjacent to the Quwwat-ul-Islam Mosque. It was originally known as the mazana, 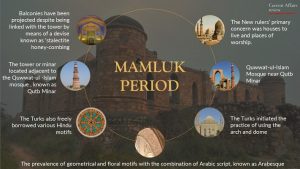 meaning the place from where the call for prayer or azan was made, and later came to be known as the Qutb Minar. The latter name was possibly given as it was initiated by Qutbuddin Aibak. Again, it could also be because the construction was completed during the reign of Iltutmish when the famous Sufi saint Qutbuddin Bakhtiyar Kaki having lived in Delhi, it came to be perceived as a token of his spiritual attainments. Some historians have renounced the belief that the minar was based on an earlier Rajput tower and have attributed the rise of this popular idea to the fact that some of the stones used at the base seemed to have belonged to some of the destroyed temples of the area. The building of towers was, albeit not an invention of the Turks, as it can be prevalent in India, West Asia and other places, but the Qutb Minar is nevertheless quite unique in many ways. One of the most remarkable features of the minar is the skilful manner in which the balconies have been projected despite being linked with the tower by means of a devise known as ‘stalectite honey-combing’. The other notable constructions of Iltutmish’s reign include his own tomb that clearly echoes the blend of Hindu and Muslim traditions in architecture.

The Khalji period witnessed a lot of building activity. Mention may be made of Alauddin Khalji’s capital Siri, which he built a few kilometres away from the site around Outb. However, unfortunately hardly anything of this site has 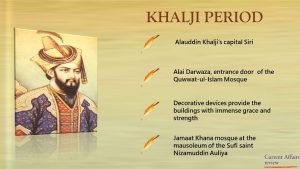 survived. Another important construction of Alauddin’s reign was the Alai Darwaza, which was an entrance door that was added to the Quwwat-ul-Islam Mosque. Contrary to the earlier buildings where the dome was built on the overlapping courses of masonary, gradually decreasing in size as they rose upwards, the Alai Darwaza’s dome was based on radiating voussoirs. Another novel feature of this building is the horse-shoe arch. The decorative devices such as the merlons in the inside of the arch, use of lotus on the spandrel of the arch, use of white marble in the trellis work, and the marble decorative bands used to set off the red sandstone provide the building with immense grace and strength. Mosque architecture also developed during this period. Mention may be made of the Jamaat Khana mosque at the mausoleum of the Sufi saint Nizamuddin Auliya.

Like their predecessors, the Tughlaqs were also great builders. The huge palace fortress complex called Tughlaqabad that was built by Ghiyasuddin and Muhammad Tughlaq clearly testifies this fact. It clearly hints to the immense architectural skills of the period during this period, whereby we can see as to how a huge artificial lake was created around the Jamuna by blocking its passage. One of the most remarkable features of the Tughlaq architecture is the 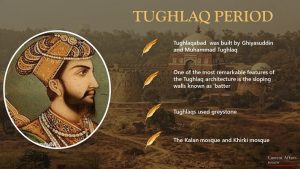 sloping walls known as ‘batter’, which gives the effect of strength and solidity to the building. Another important feature of Tughlaq architecture is the deliberate tendency to combine the principles of the arch, lintel and beam. The buildings of Firuz Tughlaq in the Hauz Khas, a pleasure resort with a huge lake around it, are some of the best examples of this practice. In these buildings, one can see that alternate stories have arches, the lintel and the beam. It is also noticeable in some of the buildings of Firuz Shah’s new fort, which is now known as Kotla. Contrary to their predecessors, the Tughlaqs did not use the costly red sandstone that was now replaced by the cheaper and more easily available greystone. In the case of Firuz’s buildings, one can see that the rubble is finished by a thick coat of lime plaster. Such stones and lime plaster being difficult to carve, the Tughlaq buildings have minimal decoration. However, the lotus is a recurring decorative device found in the building of Firuz. This period too was marked by the construction of many mosques, such as the Kalan mosque and Khirki mosque. These, however, being made of undressed stone and lime plaster, were not very elegant, and the pillars were quite thick and heavy.

The Lodis, though, continued the Tughlaq tradition of using rubble or undressed stone and lime plaster, but the Indian architects and mason, having grown more confident by this time, their domes rose much higher in the sky. This period witnessed the initiation of the double dome, which was necessitated by the increasing height of the domes. The height of the dome was made proportionate to the room inside by means of an inner cover that was put inside the dome. Sikander Lodi’s tomb is one of the best examples of this practice. Again, some of the tombs were placed in the midst of the gardens, as we can see in the case of the Lodi Gardens in Delhi.

Protection for protectors: On safety of healthcare workers

Healthcare professionals are at the forefront of the whole crisis and are working in hazardous conditions. However, instead of being appreciated, they have been abused and beaten up. The condition is so bad that the [Read More]

The National Initiative for Proficiency in Reading with Understanding and Numeracy, or NIPUN Bharat Mission, was introduced by the Indian Ministry of Education as part of the National Education Policy 2020. By the end of [Read More]

Scientists from the country have endorsed a letter to the PM urging him to take certain measures to fight out the pandemic in the country. Details form the news are important for both prelims and [Read More]