The British conquest and the dissemination of colonial culture and ideology that followed in the wake of it resulted in an inevitable introspection concerning the strengths and weaknesses of indigenous culture and institutions. The educated Indian elite in their bid to counter the civilisational critiques mounted by their colonial masters especially those concerning religion and the position of women, both of which were again connected, sought to reform Hinduism from within in the light of post-enlightenment rationalism. Despite the variations in response, the educated Indian elites during the 19th century unanimously agreed on the need to reform social and religious life. This phenomenon is commonly referred to as the ‘Bengal Renaissance’ or the ‘Nineteenth Century Indian Renaissance’. Irrespective of the various problems in using the term ‘renaissance’, this cultural movement attempted to discover rationalism in India’s past and thereby bring her religious and philosophical traditions within the domain of reason.

Ideology of the Indian Renaissance

It must be noted here that the social base of this movement was primarily confined to the newly emerging middle class and the traditional as well as western-educated intellectuals. This movement that eventually embraced the whole of India was initiated in Bengal by the efforts of Raja Rammohan Roy, commonly referred to as the father of modern India. He belonged to the upper caste gentry whose power and position had been strengthened by the Permanent Settlement and the numerous other opportunities made possible by the colonial rule. Roy came to be exposed to and imbibed a wide range of ideas. While he initially imbibed rationalism from his early training in the 18th century in Perso-Arabic literature, he later studied Vedantic monism and finally became exposed to Christian Utilitarianism after he migrated to Calcutta in 1815. These intellectual influences had an immense impact on him, which prompted him to counter the missionary claim of superiority of Christianity. However, this did not mean that he declined to cognizance the evils prevalent in Indian society. He highly criticized what he perceived as the contemptible aspects of the Hindu society, be it the wrongful monopoly of the Brahmins, which he ascribed to their monopoly over scriptural knowledge, or the abominable condition of women in the Hindu society as evidenced by the prevalence of evil practices such as sati or the despicable condition of widows. However, his response to the civilisational critiques mounted by both the colonial administrators and the Christian missionaries on these grounds was rejecting them as features of a decadent society, thereby creating a social climate for modernisation. 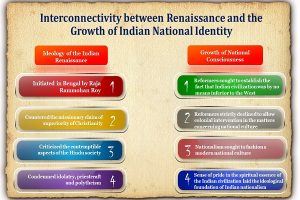 Reformers like Roy came to perceive the nineteenth century as a result of an accretionary process, a distortion of a once existing ideal and golden past, when no such malpractices existed. Thus Roy sought to reform Hinduism in light of reason, by returning to its purest form as enshrined in the Vedanta texts. He highly condemned idolatry, priestcraft and polytheism. Simultaneously he also translated the ancient Hindu scriptures to prove his contention that they themselves propagated monotheism. Given the fact that practices based on faith cannot be challenged without bringing faith itself into question, Roy sought to establish that sati had no religious sanction and Vidyasagar to find scriptural support in favour of widow remarriage.

The cultural project of Renaissance thus aimed to “purify” and “rediscover” Indian civilization that would conform to the cherished European ideals of rationalism, empiricism, monotheism, and individualism. The reformers sought to establish the fact that Indian civilization was by no means inferior to the West, as had been hitherto alleged by their colonial masters and the Christian missionaries. In fact, in terms of spiritual accomplishments, it was superior to the West. This sense of pride in one’s own culture that came to be as a result of the need to counter the civilisational critique mounted by the colonial administrators and the Christian missionaries which were in fact being utilized for justifying the political subordination of the Indians, is what ultimately paved the way for the growth of national consciousness whereby the colonized came to perceive themselves as united and distinct from their colonial masters but nevertheless not inferior to them. As has been brought to the fore by a section of historians, it is a common misconception to perceive nationalism as a political movement alone and thereby trace the rise of nationalism in India from 1885 onwards. But, in fact, anti-colonial nationalism creates its own domain of sovereignty within the terrain of society well before it begins its political battle. This is achieved by means of dividing the world of social institutions and practices into two domains, namely the material and the spiritual. While the superiority of the West in the outer material domain was acknowledged unanimously, the inner spiritual domain was the one that bore the essential marks of cultural identity and was its sovereign territory and thus the colonized elites declined to allow any kind of colonial intervention. A section of historians are of the opinion that the period of social reform in fact, constituted two distinct phases. While in the earlier phase, the reformers depended upon the colonial administrators to bring about reform of traditional institutions and customs by means of state action, in the later phase, although the need for change was recognized, the reformers strictly declined to allow colonial intervention in the matters concerning national culture. This second phase was, in fact, the phase of nationalism. The inner spiritual domain did not however remain unchanged, for here nationalism sought to fashion a modern national culture that was nevertheless not Western. It was this very sense of pride in the spiritual essence of the Indian civilization as opposed to the material culture of the West that laid the ideological foundation of Indian nationalism that developed since the late 19th century.

Contradictions Inherent in this Nationalism

Mainstream nationalism that developed out of this sense of pride in the spiritual heritage of India was nevertheless fraught with contradictions and ambiguities. The pride for the supposed golden past of the Indian civilization was often reduced to uncritical and obscurantist defence of all customs and practices of the past, thus paving the way for Hindu revivalism and eventually communalism. Besides, in their bid to idealise the Indian/Hindu tradition rooted in classical Sanskrit texts, the reformers completely bypassed the long span of Muslim rule. As a result, the national identity which was created proved to be inclusive and exclusive at the same time. While it successfully united the upper caste Hindus, it failed to accommodate other discordant voices such as Muslims, non-Brahmins, untouchables and even women. India having a plural society whereby the Indians have several identities namely class, caste and religious identities, nationalism and national identity too was bound to have been marked by multiple voices as each group interpreted their nation and sometimes even in contradictory ways.

Thus, it may be concluded that social reforms which marked the renaissance period though indeed resulted in the growth of national consciousness and a distinct national identity, what emerged was not wholesome and rather had a very limited social base.