Tropical cyclones are generated when climatic characteristics over the ocean vary over time, most notably the sea surface temperature and wind speed pattern. Potential vorticity, vertical wind shear, and pressure all play a role in these processes. Over the previous four decades, the frequency of stronger Tropical Cyclones (category 3–5) has increased, according to the IPCC’s sixth assessment report. Tropical cyclones have wreaked havoc on Oman, UAE, Iran, Muscat, and India’s west coast in recent years, and the Arabian Sea has become a breeding ground for them. The Bay of Bengal is home to over 80% of all cyclones that originate in the north Indian Ocean. Every year, 5-6 cyclones form, with 1-2 reaching a severe stage. Hence, this article aims to better understand tropical cyclone activity over the Indian Ocean by analysing the frequency and explaining observed higher intensity using various parameters.

A Susceptible Nature of Indian Ocean

Tropical cyclones are one of the most common hydro-meteorological disasters in tropical and subtropical latitudes, inflicting havoc on coastal and sea-based communities. Wind, storm surges, and widespread rainfall events are all threats that tropical cyclones bring with them. These have been the most devastating natural catastrophes around the rim of the North Indian Ocean, killing thousands of people and causing billions of dollars in property damage. The eastern coast of India, as well as the coasts of Bangladesh, Sri Lanka, and Myanmar, are at risk. Around 40% of the world’s population lives within 100 kilometres of the coast, making it very vulnerable to tropical cyclones. India’s coastline, which stretches for 7516 kilometres and is shared with the North Indian Ocean, is part of the coastal zone. Due to its small continental shelf, low coastal landscape, large population density, geographic location, and physiological traits, India has become vulnerable to such conditions.

Tropical cyclones are formed by severe disturbances that develop swiftly as a result of long-term changes in climatic factors across a specific region (few days to few weeks). These consequences are mostly determined by changes in sea surface temperature and regional wind speed patterns. Variations in vertical wind shear and potential vorticity are controlled by changes in wind speed. Changes in sea surface temperature cause low-pressure areas to emerge in the oceans, while changes in wind speed patterns tend to intensify cyclone formation. Over the previous 15 years, the severity of tropical cyclones in the North Indian Ocean has grown. Since 1980, the amount of cyclone energy accumulated in the Bay of Bengal has increased dramatically. With rising sea surface temperature and upper ocean heat content, the intensity of post-monsoon Tropical Cyclones in the Bay of Bengal has increased. Researchers have uncovered unexpected tropical cyclone trajectories over the Arabian Sea, as well as rapid intensification as a result of the warm ocean.

Arabian Sea vs Bay of Bengal

Few climatologists believe that the Bay of Bengal has a higher sea surface temperature (SST) and higher moisture content than the Arabian Sea, resulting in more climatological Tropical Cyclone activity. Higher SST and the presence of disturbances from the Western North Pacific are attributed to the increased activity in the Bay of Bengal. 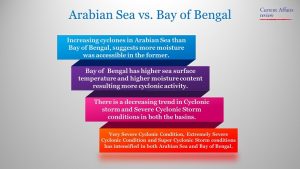 Influence of ENSO on the Indian Ocean 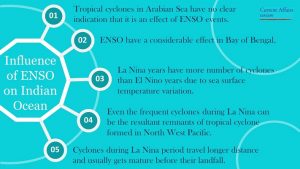 Global Warming: A Catalyst for Intensification of Tropical Cyclones

Higher relative humidity, especially at mid-level, weak vertical wind shear, and a warm sea surface temperature all contributed to the growing intensity of severe cyclonic storms with huge socioeconomic consequences. This demonstrates the importance of global warming in causing this upward tendency. Climate change’s impact on extreme weather events, such as the frequency and intensity of tropical cyclones that occur over global ocean basins, is a source of concern. In the North Indian Ocean, high-intensity cyclones have become increasingly common, putting coastal areas at risk.

According to the newest assessment by the Intergovernmental Panel on Climate Change, the Indian Ocean is warming faster than other oceans, and experts are warning that as a result of climate change, India may experience 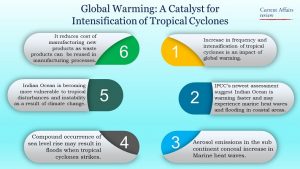 increasing marine heat waves and flooding. Aerosol emissions hide some of the increase in marine heat waves in countries like India; therefore, reducing them is crucial for air quality. Increased heavy rain events and glacier melting will all have an influence on countries like India, as will more compound occurrences from sea-level rise, which may result in floods when tropical cyclones strike. The Indian Ocean region is warming faster than the rest of the world, which means the region’s relative sea level could rise. As a result, coastal regions will suffer sea level rise in the 21st century, contributing to more frequent and severe coastal flooding in low-lying areas, as well as coastal erosion.

Impact of these meteorological characteristics on future conditions

The research shows how meteorological parameters have risen in recent years, perhaps putting the world in a vulnerable situation in the future. However, experts and climate reports have given solutions for mitigating the impact. Yet, the aforementioned scenario will worsen India’s vulnerability, as well as that of other Indian Ocean coastal nations. Only anthropogenic activities can be dealt with, and they are the sole cause of these changes in climate parameters. Extremities are increasing in the Indian Ocean as a result of human effects, as evidenced by our findings. Climate change is primarily caused by greenhouse gas emissions from the subcontinent. The Indian Ocean is becoming more vulnerable to tropical disturbances and instability as a result of climate change. Hence, this region is becoming a hotspot for more severe cyclones and will continue to do so in the future.

Rural communities play an essential role in protecting the forest and stabilize climate change while fighting bad policies and people who have motives for land theft and destruction of forests. However, indigenous communities and activists [Read More]

For BRICS, challenges and opportunities

The pandemic has brought focus back to regional cooperation. For example, we have seen SAARC becoming relevant again. The pandemic can bring a common outlook among the countries in BRICS which it has lacked for [Read More]

The recent political turmoil brewed up in states like Karnataka, Madhya Pradesh, and Maharashtra have raked up the issue of otherwise ignored Anti-defection law. In what has now become the standard operating procedure, several MLAs [Read More]