If physics and chemistry powered the industrial advancements of the 20th century, biology promises to generate equally ground-breaking technological transformations in the 21st century. Optimists pin their hopes on biotechnology to pioneer the advances in sectors like healthcare, agriculture, environmental conservation, etc. Being an emerging economy that projects itself as a promising hub for global innovation, India is no exception. Like many countries, India has wasted no time in embracing biotechnology to unlock its potential to propel its economy. Biotechnology, albeit isn’t a new discipline, its advance by leaps and bounds in the recent past has made it part and parcel of our daily lives. Ever since its introduction in India in the last quarter of the 20th century, it has made deep inroads into different sectors. The various services rendered by biotechnology help India fight hunger and disease, decarbonize the economy, enhance Agri productivity, etc. Before discussing the advances of Indian biotechnology and the government interventions, we shall first understand what is biotechnology?

The term ‘Biotechnology’ was coined in the year 1919 by agricultural engineer Karoly Ereky; hence he’s regarded as the father of Biotechnology. Biotechnology is a combination of two words, i.e., biology and technology. As per the standard definition, “Biotechnology is the use of an organism, or a component of an organism or other biological system, to make a product or process for a specific use.” Biotechnology thus emanated from genetic engineering and took birth in the food industry by the turn of the 20th century, and later ventured into other sectors such as medicine and the environment. Some of the path-breaking technological advances like penicillin, beer brewing, and gene therapy have all been the products of this technology. This technique consists of separating the gene that codes for a useful protein and inserting it in the target host or introducing it into multiplying cells, such as yeast, bacteria, or mammalian cells, for mass production of the desired protein.

People have been making use of biological processes to enhance their quality of life for about 10,000 years, which began with the first agricultural communities. Approximately 6,000 years ago, humans began to harness the biological processes of microorganisms to make bread and alcohol and preserve dairy products. But such processes 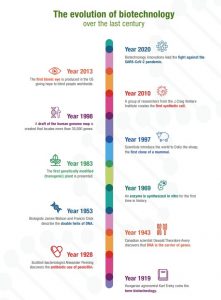 don’t qualify to be deemed present-day biotechnology, a term usually applied to the molecular and cellular technologies that emerged during the 1960s. The nascent biotech industry began to consolidate in the mid-1970s by Genentech, a pharmaceutical company established in 1976 by Robert Swanson and Herbert. In 1982 recombinant insulin became the first product developed through genetic engineering to have secured approval from the U.S. Food and Drug Administration (FDA). Since then, scores of genetically engineered protein medications have been commercialized around the world with rigorous zeal.

Recognizing the need to support biotechnology in India, the government set up a Department of Biotechnology (DBT) in 1986. LPG reforms in 1991 heralded a watershed moment in the Indian life sciences industry. Unprecedented investments were made by leading Indian pharma companies to carve a niche for themselves in the global markets through a combination of swift indigenous expansion and global collaborations. Since then, India’s biotechnology hasn’t had to look back. In the course of time, India transformed into a biotechnology and pharmaceuticals hot spot and a hub for manufacturing small-molecule generics, vaccines, and insulins. India is placed among the top 12 biotechnology destinations in the world and positions itself as the 3rd largest biotech destination in the Asia-Pacific region.

Biotechnology in Aid of India’s Growth

Biotechnology serves the crops in myriad ways, such as inculcating insect resistance, enhancing crop output, herbicide tolerance and facilitating the use of more environmentally sustainable farming practices. Biotech is helping to feed India by, 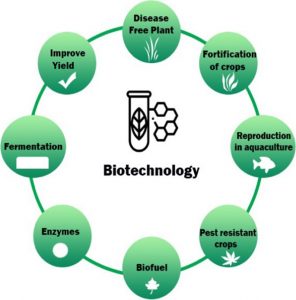 Bt cotton has been a classic example of the application of biotechnology in agriculture. It has been genetically modified by the addition of genes from a common soil bacterium, Bacillus thuringiensis. These genes encode to produce insecticidal proteins, and thus, Bt cotton crops produce one or more toxins as they grow, which act against certain insects, obviating the need for insecticides. Today, almost 80% of cotton in India comes from Bt cotton.

The food industry is one such sector where biotechnology has been proven to be of great utility. Bread, cheese, wine, beer, yogurt, and vinegar are all the oldest products of biotechnology. However, updated methods are now being employed to make these traditional goods to the liking of the consumers.

Genetically modified microorganisms have increasingly been employed in the food industry. In a few cases, these microorganisms can be eaten like the case of yeast extract used to prepare bread. Other microorganisms are used to prepare vitamins such as B12. Genetically modified lactic acid bacteria are used to prepare cheese. The artificial sweetener aspartame is made by bacterial fermentation through biotechnological processes. Some genetically engineered food items are designed to serve health benefits. They have recently been termed nutraceuticals, as their role lies between nutritional supplements and pharmaceuticals. Few such examples are antioxidants, designed to reduce the risk of cancer, and specific oils that diminish cholesterol levels and the vulnerability to heart diseases. Nutraceuticals have been of great interest to researchers and are increasingly applauded to complement the pharmaceuticals.

Biotechnology is of great use to reduce carbon footprints and thereby promote environmental conservation efforts. The oil-based raw materials that are used in the plastic industry can be replaced with GMO-based materials. Bioremediation can be achieved using GM plants to treat toxicities. Similar technologies can also be used to clean oil spills.

The biggest contribution of biotechnology to humankind is in the medical sector. The recombinant DNA mechanisms have made immense strides and impact in healthcare by enabling the mass production of effective therapeutic drugs and vaccines. At present, about 30 recombinant therapeutics have been approved for human use the world over. In India, 12 of these are presently being approved and marketed.

–       Gene Therapy: Gene therapy is a method that allows the correction of a gene defect that has been diagnosed either in a person or an embryo. Here the desired genes are inserted into a person’s cells and tissues to treat a genetic disorder. There are several methods to achieve this, such as gene augmentation, gene suppression, gene addition, gene replacement, etc.

–       Genetically Engineered Insulin: It is impossible to produce insulin from living beings in conventional methods to cater to global demand. But biotech has enabled insulin to be produced industrially in desired quantities.

–       Molecular Diagnosis: It is not possible to detect the diseases using the conventional methods of diagnosis, i.e., serum, urine analysis, etc. Recombinant DNA technology, Polymerase Chain Reaction (PCR), and Enzyme-Linked Immuno-Sorbent Assay (ELISA) are some of the techniques that have been instrumental in the early diagnosis of several life-threatening diseases.

–       Vaccines: The recent pandemic just underscored the importance of vaccines for the survival of humankind. It isn’t an overstatement to say that without biotechnology, vaccines of this scale wouldn’t be possible, and without vaccines, the human population wouldn’t have reached where we are today. India is one of the major vaccine suppliers in the world, thanks to its vaccine production infrastructure. 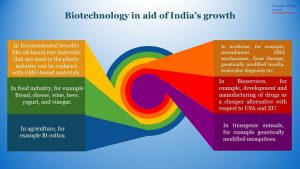 They include contract research, manufacturing services, clinical trials, etc. The high cost of drug development in highly regulated markets, such as the United States and the European Union (EU), encourage pharmaceutical companies to look for cheaper alternatives. This is where India has an edge as drug development cost in India is significantly lower than those of the USA and almost half as much as those in the EU.

Recombinant DNA technology enables the introduction of foreign genes into the animals to obtain desired qualities like disease immunity, increased milk, and tolerance to weather. Genetic modification in mosquitoes has been done to prevent them from procreation and thereby help contain malaria. India being an agrarian economy, benefits greatly from such cattle.

Biotechnology has almost become an indispensable part of the Indian bioeconomy. The govt has embarked on several schemes as it envisages a greater role for biotech to help India reach a target of USD 5 trillion economy. A few of those are,

This is widely touted to be path breaking in India’s journey of biotechnological progression. Some of its provisions are.

Overall, the national biotechnology development strategy has set few targets in terms of numbers, to be achieved by 2025. They are,

Is India ready to reach the goal?

By virtue of its inherent strengths, the goal appears to be a low-hanging fruit. But is it so low? Let’s understand why it appears to be low hanging yet isn’t so low.

However, despite these advantages, India is beset with a litany of shortcomings that are plaguing the Indian biotechnology sector. These lacunae have cumulatively prevented India so far from working at its full potential.

In the recent past, we have witnessed a very promising growth in the Indian biotechnology sector.  At present, India is one of the top 12 biotechnology destinations in the world, and the Asia Pacific region’s third largest biotechnology hub. This ascendancy stems from the strong foundation that India has been laying over the last three decades. When the COVID-19 crisis struck in 2020, the Indian biotech industry came to the forefront and rose to the global need by manufacturing diagnostics, therapies, and vaccines.  Indian Biotechnology sector is widely expected to reach a market size of USD $150 billion by 2025. There are around 5075 biotech start-ups as of today, with approximately 10,000 predicted by 2025.

Being a global biodiversity hotspot, and as a potential beneficiary of these path-breaking technologies, India must proactively engage in shaping the governance regimes without compromising on its interests. These interests essentially include safeguarding the indigenous bioresources and related knowledge, equitable distribution of technological know-how, and preventing the abuse of these technologies. Before this, India must also focus on providing a stable and open domestic ecosystem for biotech innovations by working on measures like increasing budgetary allocations, active collaborations with industries and global players, multiplying the incubation centers, upgrading the national skill curriculum as per the latest industrial demands would go a long way in helping India encash its advantageous position vis-à-vis global players.

Can our Parliament meet virtually?

The editorial looks into the question if the Parliament can virtually meet. The Budget session was adjourned ahead of schedule so it is unclear if the Monsoon session will be called during the pandemic. Click [Read More]

Where is Kim Jong-un?

The internet has been filled with speculations that the North Korean supreme leader has been terminally sick. The article highlights how without the correct facts misinformation can spread like wildfire. Click to read the article

This editorial discusses the need for recruiting more women in the police force. This news is related topic, government policies of GS 2. Click to read the article