Indian dance has its genesis in antiquity. The first formal mention of dance in textual form is found in the famous treatise “Natya Shastra”, penned down by the 2nd century BCE sage Bharat Muni. He narrates that dance was created alongside drama as a part of recreational activities for Gods. So, in their pristine forms, Indian dance was indispensably intertwined with drama, i.e., theatre art. Even the Archaeological findings have provided overarching evidence to date the genesis of dance back to thousands of years ago. The earliest evidence or representation of dance comes from the palaeolithic period, on the walls of the Bhimbetka caves of Madhya Pradesh. Several group dancing episodes were illustriously painted on the walls of these caves. Later, the Harappan civilization is evidently found to have practiced and promoted dance arts. The bronze statue of a girl, cast in tri-Bhang posture, found in Mohenjo-Daro, stands testimony to the Harappan’s love for Dance. Later, Dance was widely depicted in various paintings like those of Ajanta and Ellora, and it was patronized by many Kings.

As we discussed above, Dance was traditionally a religious pursuit. Indian mythologies where Shiva was depicted as a cosmic dancer galore. Indian temples, since the ancient period, had richly-carved dancing figures on their walls. Dance, which was once restricted to the confines of the temple complexes, i.e., devadasi, has breached the temple walls and ventured into the king’s courts. Thus, what was one spiritual, has started to be a recreational activity as well. Later, depending on the style, composition, and intricacies, Indian dance was broadly classified into different types like Classical Indian dance, Folk dance, Tribal dance, etc.

Owing to the millenniums of history, wide geography, diverse cultures and traditions, and multiple ethnicities, there are scores of dance forms in India, each being grounded in the social milieu that it dawned from. 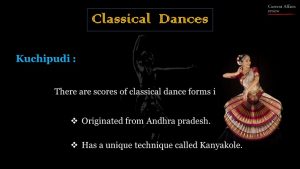 Kuchipudi: Kuchipudi, originally called Kuchelapuri or Kuchelapuram, is named after a village in the Krishna district and is a classical dance form from Andhra Pradesh. It is largely an outgrowth of the Bhakti (devotion) movement beginning in the 7th century AD. 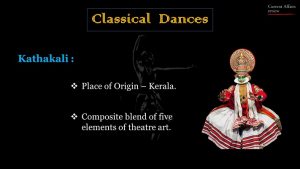 Kathakali: The much popular Kathakali has its profound origins in Kerala. In Malayalam, ‘Katha’ literally means story, and ‘Kali’ means to play. So, it actually means story-play. Kathakali encapsulates several characteristic features of many of the dances and dramas of the Southern part of India. It evolved out of its predecessors like the Kootiyattom, Sastrakali, Mudiyettu, Ramanattom, Theyyattom, and Krishnattom of Kerala. It is widely regarded to be a composite blend of five elements of theatre art, i.e., Nritya, Nritta, Natya, Geeta, and Vaadya. 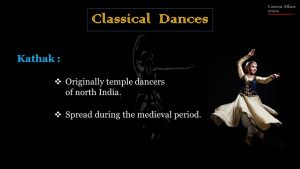 Kathak: Kathak derives its name from Kathaks, who were temple dancers of north India. It began to spread during the medieval period as a part of the bhakti movement. As with any other dance form in India, kathak is also centred around Hindu mythological themes. Ras Leela is indispensable from kathak.

During the Mughals, Kathak had reached the premises of royal courts, and it acquired the present shape under the influence of the confluence of local, Persian, and central Asian luminaries present in the court. 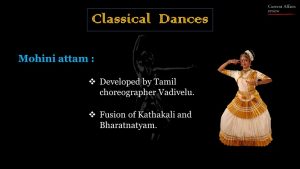 Mohini Attam: Kerala’s pride, Mohini attam, was developed by the great Tamil nattuvanar (choreographer) Vadivelu. Mohini attam, despite being the result of the fusion of Kathakali and Bharatnatyam, has evolved its own identity. In Malayalam, the literal meaning of the word “Mohini” is female enchanter, and attam means dance, i.e., an enchanting dancer. In the word Mohiniattam, ‘Mohini’ means a maiden who charms the audience, and ‘attam’ means dance. 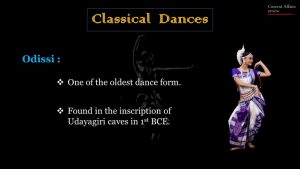 Odissi: Based on the archaeological evidence, it is safe to conclude that Odissi has been the oldest classical dance in India. Inscriptions of Udayagiri caves dating back to the 1st century BCE stand testimony to the above assumption. It is primarily a religious dance, patronized by the kharvela kings. It has its origin in temple complexes of Odisha. Over time, it evolved into three distinct sub-styles, i.e., Mahari, a temple dance; Nartaki, royal court dance and the Gotipua, young boys enacting female roles. 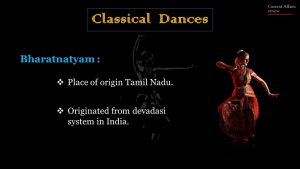 Bharatanatyam: It is a Pan-India popular classical dance hailing from Tamil Nadu. It is one of the oldest classical dances of India and originated from the devadasi system. It is a highly stylized solo dance predominantly performed by females. It derives its name from the words Bhava (expression), Raaga (Music), Taala (rhythm) and Natya, which means dance.

Sattriya: Sattriya is the sole classical dance hailing from the eastern part of India. It has its inception in the medieval age Vaishnava monasteries of Assam called Sattras and was a male privilege. The current refined form of sattriya is attributed to 15th century Shankaracharya. In the present day, it has been performed by both men and women outside the sattras.

Though it has dawned long ago, its current form is relatively new and is the youngest of all the recognised classical dances. It has evolved into two traditions – Lai Haroba and Khamba Thoibi.

Dances in folk culture are generally enacted to express festivity and joyful events. Folk dances are performed during a multitude of occasions, such as the arrival of seasons, the birth of a child, a wedding event, carnivals, etc., making folk dance an integral part of the social lives of Indians. Some of the features of Indian folk dances are;

Some of the famous folk dances of India are;

India harbours a vast tribal population hailing from diverse races and cultures. The majority of their population resides in the forests and hilly regions. Dance has been so vital to their lifestyles, so much so that it’s hard for the tribal men to find a mate if they do not know dancing. Also, dance has been so intricately weaved around their lifestyles that usually the dance form of mongoloid tribes, who subsist on fishing and hunting activities, resembles fishing and hunting activity, and similarly, the dance of tribes dwelling on plains resembles group activities. Some of the tribal dances are,

During the medieval periods, owing to the active patronizations by the kings, Indian dances have been thriving well. However, with the advent of Europeans, art forms were relegated and as a result of which they were left to gasp for breath. However, due to the priceless efforts of a few individuals in the recent centuries, Indian classical dances have breathed a fresh lease of life. A few of those pioneering luminaries were,

These luminaries, along with many others, have shouldered the responsibility to revive this fading opulence of India and pass the baton to posterity.

A State of Crisis

The ceaselessness of Indian classical dance has probably not been so endangered since the Victorian British era’s Anti-Nautch Laws as it is now. The Indian dances that have once been integral to the social lives of people haven’t found equal footing in 21st century India. This could be attributed to several threats, some of which are,

Globalisation: The increased traffic of ideas, ideologies and tastes between the global countries has often resulted in western tastes prevailing over their oriental counterparts. Consequently, western dances like jazz, hip-hop, ballet, etc, have been gaining more traction at the cost of Indian dance forms.

Urban lifestyles: The fast-paced lifestyles of Urban audiences are bereft of longer attention spans and would tend to prefer a “fast food” sample of a dance show rather than sit down patiently to watch out the entire duration of the performances.

Government’s apathy: Our government which is already burdened finds little time for cultural activities like this, which reflects in the minimal efforts and budgetary allocations. So, it’s now largely down to individual and organisational efforts.

Modernity rush: The FOMO (Fear of Missing Out) syndrome is increasingly driving the neo-middle classes and the millenniums away from the classical Indian heritage so as not to fall behind the so-called contemporary modernity. When the Bollywood, national media, and social media are going gaga over western arts, naturally, the individuals would feel that subscribing to classical Indian arts would result in their ostracization.

Further compounding the woes, not many academic institutions in India offer courses and provide a conducive environment to propagate Indian classical dances.

Arts are timeless wealth for any country. To keep this wealth intact, the government, through the ministry of Culture, instituted the Sangeet Natak Academy in 1953, with the mandate to promote Indian music and Dance. It undertakes a few measures like,

Apart from this, Kalakshetra Foundation at Chennai operates a college-Rukmini Devi College of Fine Arts, for promoting Bharatnatyam and Carnatic Music.

However, the budgetary allocations to carry out these activities amount to less than 50 crores per annum, as per the 2022-23 budget. For a country with such an abundance of population and a huge wealth of dance forms, probably numbering in hundreds, this budgetary allocation looks very paltry and a mere formality. On the other hand, China outsmarts India in hogging the limelight in the global cultural landscape by pro-actively establishing its institutions in many prominent countries to propagate its cultural wealth to the world. Even India has embarked on this mission, but it a no match to China in terms of the sheer scale.

The Imperative to Revive

By now, we are all well apprised of the centrality and the vitality of the dances to the Indian culture and diverse heritage of India. It is vital to note that the Dance still renders a litany of services in the 21st century India, such as;

Safeguarding the heritage: Indian dance has a recorded history of at least many millenniums, and thereby they encapsulate volumes of Indian traditions and ideas. Keeping the several dance forms alive would go a long way in preserving our rich and proud heritage for posterity.

Asserting soft power: Indian dance, particularly classical dances, have a huge audience the world over. India can encash this craving by translating it into soft power. Indian dances are increasingly hogging the limelight all across the west, especially in Europe and North America. This helps India extend its cultural footprint on the global atlas of heritage.

Recreational services: It isn’t an exaggeration when we state that we cannot find a single festivity or wedding event in India without the enactment of dance. That is the gravity of joy that dance renders to the Indian populace. Probably and arguably, after the Indian drama, dance is the biggest source of recreation for Indians.

The Soothing effect: Arts are wonderful tools to calm the otherwise hustle and bustle-ridden modern lives. They help calm down the nerves, leave a soothing impact on mind, tranquilizes the mind, physical exercise for the performers, and act as a kind of meditation for the body and soul.

The arts enable us to comprehend and respond to external and internal realities. The age-old dancing tradition of India is a perfect bill that facilitates interacting with our ancient heritage. To overcome the restlessness of fast-forward lives of the artists, audience, and nations, the meditative core of these art forms has to be preserved. This eternal need is never an exaggeration, overstatement, or outdated. Dance has the mystic power of delighting, educating, and entertaining the masses. So, let’s give back the dance its due glory that it once enjoyed during its heydays.

The Centre relaxes export restrictions which it had introduced earlier this month on 13 APIs. The DGFT mentioned that all formulations in the 3rd March notification will be permitted for export under the advance licenses [Read More]

Why hospitals are hotbeds of coronavirus transmission

Across the world, hospitals have become hotbeds for coronavirus infections. Unavailability of PPEs and proximity to infected patients are posing threat to health workers across the world.  Click to read the article