Although the massive anti-imperialists protests in the immediate post-war years ended in a failure resulting in exhaustion of popular energies and tendencies towards compromise, division was not the sole constituent of the post-1942 Indian scenario. The mainstream nationalist movement that grew under the aegis of the Indian National Congress at the historical conjecture of 1942 albeit incorporated multiple streams of protests, yet there nevertheless existed contesting visions and agendas of emancipation within India’s struggle for independence. One such alternative vision was that of Subhas Chandra Bose. Following the beginning of the war in Europe, when Congress was still pondering over the question of the right course of action under the circumstances, Subhas Chandra Bose concluded that the Indians were losing a rare opportunity and they must take advantage of the empire’s weakest moment. The idea of I.N.A. was originally conceived in Malay by Mohan Singh, an Indian officer of the British Indian Army, who declined to join the retreating British Indian Army and instead sought help from the Japanese. However, soon differences of opinion emerged between the Indian Army officers led by Mohan Singh and the Japanese. The second phase of I.N.A. began when Subhas Chandra Bose came to Singapore in July 1943 with the help of German and Japanese submarines. Bose immediately took control of the situation with Japanese assurance of help and equal treatment. From Singapore, he issued his famous call, ‘Delhi Chalo.’ In October 1943, he announced the formation of the Provisional Government of Free India or the Azad Hind Government, which was immediately recognised by Japan and eight other governments, including Germany and Fascist Italy; and also that of the Azad Hind Fauj (Free India Army) or the Indian National Army, of which he became the supreme commander. Despite their initial success, the Imphal campaign of I.N.A ultimately ended in a disaster. In order to assess the significance of I.N.A., it is important to distinguish between its immediate achievements and its ultimate and primarily psychological impact. The I.N.A. indeed hardly achieved anything in military terms. Besides, it came too late as everywhere the Axis powers were already in retreat by 1944. In addition to this, the Forward Bloc, which was underground in India and that might have backed up the Imphal-Kohima invasion, had already been crushed earlier. However, the significance of the I.N.A. can hardly be assessed merely in terms of its military achievements, for its political impact was yet to unfold.

We can hardly overlook and underestimate the immense impact that an actual army fighting, no matter how ineffectively, for the country’s liberation and that too one that was led by a Bengali, which was considered to be the least ‘martial’ of the Indian ‘races’ as per the British thus clearly being a huge blow to the latter, had on the patriotic imagination. Following their surrender, the twenty thousand I.N.A. soldiers were interrogated and transported back to India and, after that put on trial. For not trying them would have been hinting at the weakness of the Government. Besides, tolerating ‘treason’ would have risked the loyalty of the Indian army. Ten trials took place in total. Among these, the first, which is also the most celebrated one, was held at the Red Fort whereby three officers, namely P.K.Sahgal, G.S.Dhillon and Shah Nawaz Khan, were put on trial on the charges of treason, murder and abetment of murder. It was decided that the trial would be held in public so that it would serve as a spectacle whereby it would reveal the horrors which these I.N.A men had perpetrated, which in turn the British Government hoped would swerve public opinion against them. However, the turn of events proved that the Government had completely miscalculated the political fallout of the I.N.A. trials. For this British move to put the I.N.A. me on trial and that too one that would be held publicly immediately sparked off massive demonstrations all over the country. The press censorship having been lifted after the war, the details of the I.N.A. campaign were revealed daily before the Indian public, as a result of which these officers far from appearing as traitors, in fact, came to be glorified as patriots of the highest order and the demands for discontinuing the trial grew stronger day by day. The Congress leaders realised that they could hardly ignore this situation that had so profoundly touched popular emotions, for the elections being around the corner, the I.N.A. trials could be utilised as an excellent rallying point. Subhas Chandra Bose, albeit a renegade leader who had challenged the authority of the Congress and its ideology, yet in death, his image served as that of an ideal patriot which could be utilised for ensuring the achievement of political mobilisation. Thus the AICC meeting held in September 1945 decided to defend the accused in the I.N.A. trials. Following this decision, a Defence Committee was formed constituting of contemporary legal luminaries like Tej Bahadur Sapru, Bhulabhai Desai, Asaf Ali and Jawaharlal Nehru.

The defence argument presented by Bhulabhai Desai during the I.N.A. trials is immensely important for as has been pointed out by some scholars, it was probably the first legal argument before any court in the world that attempted to 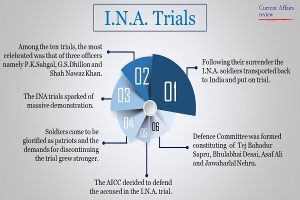 establish the legal right of an enslaved nation to wage a war for liberation against its foreign ruler. However, despite the immensely strong defence put forward by Desai and his team, the court nevertheless found the three soldiers guilty of treason and the other one of abetment to murder. The court, though, did not order their execution, but they were dismissed from their service, ordered to forfeit all their pays and allowances and sentenced to transportation. However, in spite of this, we can hardly overlook the immense importance of Desai’s defence which, it must be remembered, had a profound impact not only on the sentence but, even more importantly, on the consequent course of the freedom struggle. The public outrage that followed the trials proved to be a major blow for the British rule in India.

Impact on the Masses

The I.N.A. agitation proved to be a major landmark in many respects. Firstly the high pitch or intensity at which the campaign for the release of the soldiers was conducted was completely unprecedented. This mass upsurge can be attributed to myriad factors. The trial having been held in Red Fort served as the most authentic symbol of British imperial domination, for it was precisely here that the trial of Bahadur Shah II, the last Mughal emperor and the famous leader of the 1857 revolt was held. Another important aspect of the I.N.A. campaigns was its wide geographical reach and participation of diverse social groups and political parties. All political parties such as the Congress Socialists, Akali Dal, Unionist Party, Justice Party, Rashtriya Swayam Sevak Sangh, Hindu Mahasabha and even the Muslim League unanimously agreed that the trial should be discontinued. On the other hand, although the Communist party vacillated in its response, individual communists enthusiastically participated in the demonstrations. Most importantly, the demonstrations echoed communal harmony, which may be attributed to the fact that the three accused belonged to three different religions, namely one Hindu, one Muslim and one Sikh. An 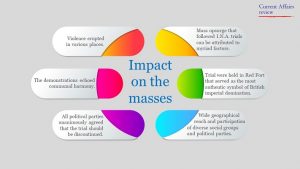 I.N.A. week was celebrated between 5th and 11th November, and an I.N.A. day was observed in cities across the country on 12th November. Different sections of the society participated in the campaign, attended protest meetings; donated money to the I.N.A. relief fund, closed shops and other commercial institutions and in some places, people even refrained from celebrating Diwali. The I.N.A. movement strikingly brought within its aegis even the remotest of places such as Coorg, Baluchistan and Assam. However, soon violence erupted when the police opened fire on a crowd participating in a protest demonstration in Madura on 7th November. This was followed by massive riots between 21st to 24th November in various parts of the country. It was, in fact, Calcutta where the riots were initiated. Although initially, the American military establishments were attacked as well along with the British ones in Calcutta, but eventually, the riots assumed a more general anti-British tone. There were instances of students clashing with the police, and later they were even joined by the striking taxi drivers and tramway labourers. These riots most importantly exhibited immense communal harmony whereby the demonstrators were seen to fly the Congress, League and Communist flags simultaneously. The Calcutta riots were consequently followed by similar demonstrations in Karachi, Patna, Allahabad, Banaras, Rawalpindi and many other places all over the country.

Impact on the Armed Forces

As has been pointed out by some scholars, one of the most significant aspects of the I.N.A. trials was the immense impact it had on the traditional bulwarks of the Raj, the army being one of the most important among them. The I.N.A. movement above all engendered a wave of disaffection in the British Indian Army, which had hitherto proved

to be the main apparatus of British control and rule in India, during the winter of 1945-46. The armed forces were very sympathetic towards the I.N.A. soldiers, thus clearly countering the official perception of the loyal soldiers being hostile to the I.N.A. traitors. In fact, the Royal Indian Air Force (RIAF) men in Kohat attended the meetings of Shah Nawaz. Again the army men in U.P. and Punjab too attended the I.N.A. meetings and that too sometimes in uniform. Besides, the RIAF men in Calcutta, Kohat, Allahabad, Bamrauli and Kanpur contributed funds for the I.N.A. defence. However, the most important consequent event was undoubtedly the open mutiny organised by the Royal Indian Navy (RIN) in February 1946 that in turn possibly served as the single most decisive reason behind the British decision to make a quick withdrawal.

Mohandas Karamchand Gandhi, an iconic figure who symbolizes many things to many people, has been perceived in myriad ways as a great opponent of European colonialism, as a champion of civil rights for racial, religious [Read More]

The Backdrop of The Revolt of 1857

The year 1857 is a landmark in the history of India, for it witnessed one of the most massive and widespread armed revolts in different parts of Central and Northern India. This is popularly known [Read More]