The nationalist movement during the outbreak of the First World War in August 1914 was in quite precarious condition. The Congress, under whose aegis the mainstream nationalist movement had been shaped, was fraught with differences and disagreements over goals and methods between its two factions, namely the Moderates and the Extremists. The affairs of the Congress during this period were dominated by Moderates like Pherozeshah Mehta, Surendranath Banerjee and Gopal Krishna Gokhale who sought to achieve social reforms and India’s development into a secular liberal democracy. Although their ultimate aim was self-government but before achieving that they wanted to work in cooperation with the British to prepare the Indian society for self-government to be gradually introduced. Albeit they took into cognizance and criticized the slowness of advancement, but at the same time they sought to invigorate the British to accelerate it through the application of sober means such as public debates and submission of representations to the government. The Extremists, on the other hand, being associated with the Hindu revival movements sought to uphold the indigenous traditions and values. They concluded that the expulsion of the British from the motherland should be the primary aim of the Indian nationalists which could be achieved by means of different methods like passive resistance that would involve boycott of British goods and institutions and refusal to pay taxes, besides, if required even acts of terrorism such as bombing and others. Another major problem of the nationalist movement during this period was the complete political inactivity of certain regions which had barely been touched either by its Moderate of Extremist guise in 1914. This included areas like Bihar, United Provinces, the Madras Presidency and Gujrat. In fact, there were only three regions that witnessed the traditions of nationalist political activity in 1914, namely Bengal, Panjab and Maharashtra. But even these three regions failed to coordinate their activities and instead, each of them developed a virtually different style of politics thereby failing to give the nationalist movement an unity and all-India character. However despite these predicaments it was precisely during this period that than ever, acquiring a truly more ‘national’ character than ever before and also succeeded in bringing under its aegis new regions and linking them together under a genuinely more all-India leadership. These changes were by no means the culmination of the war but rather that of the agitation launched by Mrs. Annie Besant and Bal Gangadhar Tilak in 1915 and the formation of their respective Home Rule Leagues.

Tilak initially sought to achieve the readmission of himself and other Extremists in the Indian National Congress as having perceived it as symbolizing the Indian national movement, he was convinced that its sanction was imperative for the success of any political action. Thus to appease the moderates, he even concluded that the acts of violence committed in the past had, in fact, retarded the pace of political progress to a great extent. Given the fact that many of the Moderate leaders had started doubting the choice they had made in 1907 in Surat and were highly disappointed and disillusioned owing to the Congress having lapsed into total inactivity, they proved to be quite sympathetic to Tilak’s overtures.

Besides, Annie Besant too played a significant role in this process by pressurising the Congress to admit the Extremists. Annie Besant sought to further widen the sphere of her activities in order to initiate a movement for Home Rule along the lines of the Irish Home Rule League. However, she was convinced that for this purpose it was imperative to ensure both the sanction of the Congress as well as the cooperation of the Extremists. Therefore, she concentrated all her energies into convincing the Moderates to readmit Tilak and his fellow Extremists. Although the Congress session of December 1914 proved to be a major disappointment as Pherozeshah Mehta and his Bombay Moderates group succeeded in convincing Gokhale and the Bengal Moderates in keeping out the Extremists, but Besant finally succeeded and in the session of December 1915, it was decided that the Extremists would be allowed to rejoin the Congress.

Formation and Ideology of the Home Rule Leagues

Tilak laid the foundation of the Home Rule League at the Bombay Provincial Conference held at Belgaum in April 1916, while Annie Besant announced the formation of her Home Rule League with George Arundale, her Theosophical follower, as the Organising Secretary in September 1916. Besant’s League, it must be noted here though, had a more all-India character than that of Tilak, it nevertheless relied heavily at first on its founder’s old Theosophical contacts. 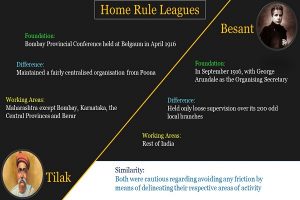 The two Leagues differed from each other in terms of organisation. While Tilak and Kelkar maintained a fairly centralised organisation from Poona, the Adyar headquarters of Besant’s league held only loose supervision over its 200 odd local branches. The two Leagues were cautious regarding avoiding any friction by means of delineating their respective areas of activity. It was decided that while Tilak’s League would work in different areas of Maharashtra except Bombay, Karnataka, the Central Provinces and Berar, Besant’s League would be in charge of rest of India.

The activities of the Home Rule Leagues included the organization of discussion groups and reading-rooms in cities, mass sale of pamphlets and lecture tours. These might albeit seem to be no different in form from the older Moderate politics but it was nevertheless significantly new in terms of intensity and extent. Although movement was primarily concerned with the concept of Home Rule which might apparently seem to be somewhat abstract and intellectual, some of Tilak’s speeches nevertheless bring to fore interesting efforts to relate this ideal to the more specific and concrete popular grievances. Tilak was of the opinion that India was like a son who had grown up and gained maturity and hence it was time for the trustee or the father to give him what was his due. In addition to this, he also linked the question of swaraj to the demand for the formation of linguistic states and education in vernacular. Also, one must take into account that Tilak’s stand on the question of non-Brahmin representation and issues of untouchability which clearly echoes the fact that he was by no means a casteist. Tilak believed that if the advanced classes succeeded in proving to the non-Brahmins that they are wholly on the latter’s side in their demands from the Government, then in the future, the agitation based on social inequality would merge with the struggle of the advanced classes. Besides, he was convinced that the real difference lay not between the Bramhins and the non-Bramhins but rather between the educated and non-educated. That Tilak was by no means a casteist is quite evident from the fact that his movement, despite being a Chitpavan Brahman affair, his Home Rule League had considerable participation of non-Bramhan traders in Poona as well. Even Gurjars and Marathas outnumbered Bramhans in districts like Khandesh. Besides, Home Rule Leaguers like B.P.Wadia also started some trade union activity among the Madras city working class. Tilak’s demand for Home Rule had not had any religious appeal but was rather a completely secular one. He concluded the Brtish to be aliens on the ground that they did not act in Indian interest and not because of their religious affiliation. Annie Besant’s League was primarily concerned with the demand of Home Rule, which she believed was to be achieved by means of promoting political education and discussion. In order to support her demands for reforms, she concentrated on the question of India’s increasing poverty for which she blamed the British and thus incited Indian animosity further against them.

Significance of the Home Rule Movement

The Home Rule Movement, albeit failed to achieve their goal of obtaining home rule for India, but nevertheless, its immense significance can hardly be overlooked. One of the greatest contributions of the movement was that it furthered the demand for self-government to a great extent. In fact, the British government’s promise of advance towards self-government can in fact be traced largely to the Home Rule agitation. Following his appointment as Viceroy in 1916, Lord Chelmsford brought to the government’s attention that Moderates were being drawn in increasingly close alliance with the Home Rulers owing to the government’s failure to make any favorable response to the demand for reforms. Thus in order to check this alarming situation and in their bid to reverse this trend, the Viceroy’s council proposed to the home government that Indian membership of legislatures should be increased. The greatest importance of the Home Rule Leagues, however, lies in the impact it had on the nationalist movement. It is the contribution of the Home Rule movement that made possible the nationalist movement to deviate permanently from the course that had been previously mapped out by the earlier Moderate leadership. The Home Rule Leagues succeeded in giving the nationalist agitation an all-India character for the first time, which it achieved by extending nationalist politics and activities to new areas, groups and a new generation. Apart from Maharashtra, the other two old bases of Extremism, namely Bengal and Punjab, remained relatively quiet, which in turn, may be attributed to British repression during the war years, making any kind of open militant agitation difficult. The main support group of the Besant League constituted of Tamil Brahmans of Madras city and mofussil towns, urban professional groups in United Provinces, the Hindu Tamil minority in Sind, and the younger Gujrati industrialists, traders, and lawyers in Bombay city and Gujrat.

One of the major contributions of the movement was that it succeeded in activizing areas like Gujrat and many parts of U.P. for the first time, which would later prove to constitute the backbone of Gandhian nationalism. The Home Rule Movement helped to shape the nationalist movement from the point of view of organization as well, for it succeeded in creating a network of local political committees covering much of British India for the first time. The branches of the Leagues, despite being only loosely linked with the headquarters, the Leagues had created formal and informal channels of communication that in the future proved to be highly important in political campaigns. Another significant contribution of the Home Rule movement nevertheless was that it introduced an agitation style in nationalist politics. Although this style had to a great extent been foreshadowed by Tilak in Maharashtra in the 1890’s, by the Punjab extremists and the Swadeshi movement in Bengal in the early 20th century, yet it was, in fact, the period between 1915-18 that witnessed the rise of agitation throughout India and was adopted by the major national organisation as a standard technique. It was this very style that was later adopted and recast by Gandhi. Furthermore, the Home Rule movement created a generation of ardent nationalist who would later prove to be the very backbone of the nationalist movement under the leadership of Gandhi when it would enter its truly mass phase. The Home Rule movement thus, though apparently might seem to be a failure as it failed to achieve its goal, but its importance in the long run in the course of the nationalist politics whereby it set the stage for Gandhi and Gandhian satyagraha can hardly be neglected.

Mohandas Karamchand Gandhi, an iconic figure who symbolizes many things to many people, has been perceived in myriad ways as a great opponent of European colonialism, as a champion of civil rights for racial, religious [Read More]