Here in this article, our primary concern for discussion is the rise and growth of India-China friendship and then how subsequently, the friendship between the two countries changed into arch-rivalry. We would not be delving into discussing the developments leading to India China War of 1962 & the conflict of 1967, or the subsequent developments.

Now, logically, we should start our discussion from the beginning of this relationship and the rise and growth of friendship in the initial years.

It is on 15th of August 1947, India started its journey as an independent and sovereign nation, under the prime ministership of Pt. Jawaharlal Nehru. Simultaneously, as a direct result of the 2nd Chinese Civil War, in 1949, the Communist Party of China, under the leadership of Mao Zedong, came to power, removing the Nationalist Republican Government of Chiang Kai-shek. Nehru (along with Subhash Bose) were socialists in their ideology. As a result, when the Communists came to power in China, which near coincided with India gaining its independence, Nehru looked at it as the unravelling of a new era of ‘Resurgence of Asia’, or Asia regaining its lost days of glory.

Additionally, a pragmatic Nehru was also of the opinion that unlike the western powers, India should not take a moral/emotional stand in the affairs of China. ‘The West’ had boycotted the communist government of mainland China (Peoples’ Republic of China – PRC) and recognised the Nationalist Republican Government of Taiwan (Republic of China – RoC) as the official government of China. Nehru was of the idea that, ‘The West’ can do this as they do not share any boundary with mainland China, whereas India had boundaries with both mainland China and Tibet. It is noteworthy, that Tibet at that time was an independent country and the administrative and spiritual leader of Tibet, Dalai Lama, was close to the West, especially that of Britain.

Nehru personally was extremely buoyant about India-China relationship. So much so, that by the end of 1950, when the Communist Government of China would invade Tibet, an independent country in India’s neighbourhood, India’s initial reaction was to ignore it.

However, there is more to the story. As we have mentioned earlier, Tibet was close to Britain. And from the very beginning, India was having an extremely rough relationship with its erstwhile colonial master. This was primarily on the ground of perception that the leadership in Pakistan, with the exception of M. A. Jinnah, were novice in international relations, as a result they are far more easily manageable by the British than Nehru, who had a mind of his own. And hence from the beginning only, the British machinery was active in discrediting Nehru and was openly hostile to India on different fronts. Nehru also, with his active participation in different anti-colonial movements against the British and other colonial powers, further complicated the situation.

As a result, after months of failed negotiations, when on 7th of October 1950, China annexed Tibet, and Tibet asked for support from the British, the British government expressed their helplessness. Instead, the British advised the Tibetans to ask for support from India, who was not only a neighbour of Tibet but also had four military bases inside Tibet, which they had inherited from their erstwhile colonial masters. On the contrary to the expectations, India declined to give any military support to Tibet against the Communist China, but agreed to mediate between the two sides, which resulted in the signing of the Seventeen Points agreement1.*

*It needs to be mentioned here, that China had suzerainty rights over Tibet, a nebulous concept, which meant different things to different people. But never held any sovereignty right over the territory.

Simultaneously, India also came to rescue the situation in the Korean Peninsula, where the American and Chinese forces had locked their horns by the end of 1950s2. The role played by India was so effective that UN appointed India as the chairman of the UN Commission appointed to settle the issue. All these developments further cemented India China friendship and led to the building of close rapport shared by Prime Minister of India Pt. Jawaharlal Nehru and the Chinese Premier Zou Enlai. Subsequently, on 28th of April 1954, India and China signed the “Agreement (with exchange of notes) on trade and intercourse between Tibet Region of China and India” or Panchsheel Treaty. Signing of this treaty was the highest point of India-China friendship. An elated Nehru gave the slogan of “Hindi-Chini Bhai Bhai”. Later on, we would also see Nehru to not only invite Zou Enlai to the first Afro-Asian Conference, also known as Bandung Conference, but Nehru would also send a plane from the fleet of Air India, by the name of Kashmir Princess, to ferry Zou Enlai to Bandung, Indonesia, the venue of the conference, in 1956.

It is post Bandung Conference, that we would see the gradual decline of India-China friendship. However, to quote from the book ‘One life is not enough’ by K. Natwar Singh, Nehru always maintained a level of caution against China and was never very confident about the intentions of the Communist Government of China, but in public he maintained a face of trusting the Chinese and aligning with their point of opinion.

Initiation of the Rivalry

Whatever the case may be, the first Afro-Asian Conference and Nehru’s declaration of the ‘Policy of Non-Alignment’ there, marked the decline in India-China friendship. Zou Enlai, who represented China in the conference, reported about the policy back to the then President of China and the most powerful leader in the country Mao Zedong. Mao Zedong would in turn misinterpret the policy and confuse the policy of Non-Alignment, where Nehru proposed the developing and least developed countries neither to join the American block (1st World Order), nor the Communist Block (2nd World Order), instead asked them to maintain equal distance from both the sides, while maintaining friendship with both the sides and create a block of their own (3rd World Order). Instead, Mao Zedong would say, that ‘if you are not with us, then you are against us’, and it is from here that the Chinese Communist Party would start looking at Government of India and Nehru as agents of the western imperialist forces. It is noteworthy here, that the Soviet Union (USSR) on the other hand, did not look at the things in the same light, rather was supportive of Nehru’s idea. 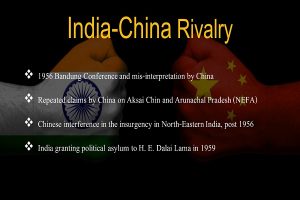 It is since then that we would see China to take hostile measures against India.

The first few such actions would become prominent in the year 1956 only. Firstly, during 1956-57, the Chinese side constructed a road inside Aksai Chin and established border posts inside Aksai Chin. India found out about the development after the completion of the road construction and raised the issue through appropriate diplomatic channels but in vain. Secondly, in 1956, the Peking Public Library  published a map showing Arunachal Pradesh as part of China. Nehru raised the issue with Zou Enlai directly, where by Zou Enlai assured India that the People’s Republic of China has no claim over India controlled territory and the matter was a mere clerical mistake. Thirdly, it is since 1956-57, that we see the involvement of the Chinese Authorities in the Naga insurgency. At first the issue was recked up by the Pakistani Administration operating out of East Pakistan, but soon China will also get involved in the affair. However, it is noteworthy, that during that time, seemingly the Governments of Pakistan and China had no relationship, which would be finally established in 1963.

These involvements by the Chinese in internal affairs of India and repeated violation of India’s territorial integrity and sovereignty by the Chinese People’s Liberation Army made the Prime Minister of India, Pt. J. L. Nehru weary.

Resultant, on March 31st 1959, when the Tibetan Buddhist leader, Dalai Lama came to India looking for asylum, the Government of India would welcome him. Previously, once in 1957, the Dalai Lama had sought asylum in India but India did not respond4. Its really curious, how things happened. In 1956-57 when Dalai Lama came to India, first time, for the celebration of 2,500 years of Buddha, he met with the Indian Authorities and requested to be given asylum for the first time. However, the Government of India was still trying to manage their relationship with the Chinese Government, resultant they did not pay much heed to this request. However, by February-March 1959, there was a massive uprising in Lhasa, the capital of Tibetan Autonomous region, which met with a disproportionately aggressive PLA response leading to deaths of thousands of common Tibetans. Previously as well, the Tibetans had risen up against the Chinese occupation and aggression over their land and culture, but the toll of deaths was never this much high. It is noteworthy here that the Seventeen Points Agreement1 signed between Tibetan authority and the Chinese, mediated by India, ensured the Tibetans of their internal administrative, socio-religious and cultural rights, which the Chinese were violating since the beginning only.

In this background, it became really difficult for the Government of India to turn away from the issue as India was also the mediator of this treaty and hence was morally responsible for upholding of the treaty. This background, along with the previously mentioned experiences of the Government of India, especially the continuous claims by the Chinese over Aksai Chin territory, and Arunachal Pradesh (the then NEFA), even at the back of repeated assurance by the Chinese Premier Zou Enlai that China lays no claim on any part of the sovereign territory of India, complicated the issue to an extreme level.

For an independent analysis, we have to admit, that the interference, started by the Chinese intelligence in promoting the insurgency in India’s north eastern territory, since 1956, and the repeated claims on sovereign Indian territory since then, were all in principle, gross violation of the Panchsheel Treaty, signed in 1954. Hence, India was also under no compulsion of honouring that treaty any more.

On behalf of Government of India, Pt Govind Ballabh Pant, the then Minister of Home Affairs, welcomed H.E. Dalai Lama. Following the Dalai Lama, nearly 80,000 Tibetan refugees came to India. Subsequently, H.E. Dalai Lama would be given political asylum in India along with his followers and would be resettled in India. The Chinese side would call this violation of Panchsheel Treaty, as in their opinion this amounted to India interfering in their internal affairs.

These developments coupled with the lack of acumen and often ignorance by the British, in border management, and implementation of the McMahon line as the border between India and Tibet would lead to rise of number of border disputes between India and China subsequently, but they are the topic of another times.*

*Next week (Friday, 30th April 2021), we will be deliberating on the border disputes between India, Tibet and China which led to the 1962 war.

You can also see related articles

It was on 29th of February 2020, USA and Taliban signed a peace agreement for the first time since the initiation of hostilities in 2001, nearly 18+ years back. The deal was signed in Doha, Qatar, in the presence of India as an observer.

‘Civilisational connect, contemporary context’ was the overarching theme of the Indian Prime Minister’s state visit to Iran in 2016. It succinctly captured the retrospective and prospective dimensions of two ‘historically engaged’ civilisations that have remained [Read More]

Reviving SAARC to deal with China

As India-China border tensions escalate, several foreign policy experts argue that India’s dealing with China has to begin with South Asia. In this regard, it is important to reinvigorate SAARC, which has been in doldrums [Read More]