An ongoing issue all over the world, throughout many centuries, has been the problem of Hunger. Unfortunately, some of them who have in abundance, take it as an advantage and fail to realize that millions of people around the world are sleeping empty stomach. To address this issue, measurement and tracking of hunger become essential. Global Hunger Index is one such tool that measures and tracks hunger and malnutrition at global, national and regional levels.

In the past two decades, India has witnessed tremendous growth and development. India, with a population of over 1.3 billion, despite its phenomenal economic and industrial growth, producing sufficient food to feed its population, is unable to provide food properly to large section of its people.

According to the Food and Agricultural Organization (FAO) report of ‘The State of Food Security and Nutrition in the World’ 2020, undernourished people in India is approximately 189.2 million people, viz., 14% of the population in India is undernourished.

51.4% of the women in reproductive age between 15 to 49 years were also anaemic. The report also highlighted some serious cases of malnourishment among children, which are life-threatening.

In addition to this, there have been estimates that one-third of the food produced for human consumption is wasted or gets lost every year. Cereals of approximately 30%, vegetables and fruits of about 40% that are produced for people of the country, are lost due to inefficient supply chain management, and, as a result, the final consumers ultimately fail to receive them. Furthermore, during harvest and post-harvest handling, a significant level of food gets lost by way of wastage during distribution and consumption stages.

Poverty is the primary reason behind the alarming level of hunger in India and in the world. Restrictions in food choices has also been a major factor behind hunger related deaths among many. Even prior to the COVID-19 pandemic in India, the situation was not good at all. The situation in India looks particularly gloomy, as the pandemic has exacerbated the situation of poverty and hunger crisis. Economists say that despite plenty of food, people can still starve to death. This is because people do not have the purchasing power. India had the second highest number of Covid cases in the world after US. However, for most of the people hunger is the most immediate threat than the virus. The pandemic and the lockdowns imposed to curb the deadly situation inflicted havoc on the economy and livelihoods in India. Many have been pushed into poverty with the onset of the pandemic.  As per reports, the number of individuals who lie below the national minimum wage threshold increased by 230 million during the pandemic. Millions of people had lost their jobs after nationwide lockdown was imposed in 2020. Although most of the people were back at work as the restrictions eased gradually, there were approximately 15 million workers who were out of work. Reports showed that the younger workers were highly impacted during the pandemic, experiencing job loss. One-third among the young workers in the age group of 13- 24 failed to recover employment even by December 2020, whereas, people experiencing the same in the age bracket of 25-44 years was approximately 6%. All these factors taken together, forced most of the poor household to consume less or no food at all, borrow money and sell their assets to feed the empty bellies. New scientist magazine says 115 million Indian children who are dependent on daily school lunches are on the verge of malnourishment because of prolonged school closures during the pandemic.  The UN’s Children’s agency UNICEF says that addressing malnutrition must remain a priority.

Although the government relief has helped some people avoid such forms of distress, the incomplete reach of the support measures left out some of the most vulnerable households.

Malnutrition in India & its Causes

According to the UN World Food programme, malnutrition has an intergenerational impact. It not only has long term effects on the children in India, but also malnourished mothers are more likely to give birth to children who are underweight or are stunted. Some of the dimensions of malnutrition are as follows:

A disproportionate immediate effect is likely to happen on the nutrition of most of the vulnerable when access to the basic minimum adequate diet is not met.

The GHI is prepared by European NGOs of Concern Worldwide (Ireland’s largest aid and humanitarian agency) and Welthungerhilfe (one of the largest private aid organizations in Germany), and calculated annually – to assess 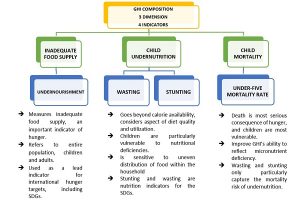 progresses and the difficulties in combating hunger and malnutrition. GHI is designed to increase awareness about the struggle against hunger, providing a way of comparison of hunger levels between different countries and regions. The results appear in a report which is published each year in the month of October. The areas of the world where hunger levels are at its highest and where requirements of additional efforts to eliminate hunger is greatest, is mainly focused upon.

Child Wasting: The most life-threatening, immediate and visible form of malnutrition is Child wasting, which is defined as low-weight for height – a strong predictor of mortality among children under the age of five. Acute significant food shortage and/or disease causes wasting. Severely wasted children are more likely to suffer, leading to death, as immunity to infections is weakened due to lack of nutrients. The ones who survive may have feeble growth and development. 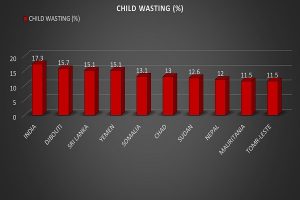 High percentages and numbers of severely wasted children indicate that the nutritional status of women during pregnancy has been poor; lacked hygienic and sanitation facilities; poor feeding practices; access to quality health services has been poor and food insecurity. UNICEF is providing a continuous support to the most vulnerable population in India under its Program 2018-2022 by aiding the government to address the situation of wasting and saving lives of women and children.

Stunting: When a child has a low height for their age, caused by malnutrition, repeated infections, and/or poor social stimulation, it is known as stunting. The WHO categorized children who are stunted as those whose heights are lower than average for their age and at least two standard deviations below WHO’s Child Growth Standards Median. A stunted child is likely to have issues such as poor immune system, organ development and brain functions.

Proper postnatal care is mandatory for both the mother and a child after its birth. Breastmilk is one of the most important weapon to combat the issue of stunting amongst those children born in poverty. It provides much needed nutrients to the baby and strengthens the immune system. A newborn baby is likely to be underweight and unhealthy if the mother is malnourished. Therefore, proper care becomes mandatory for both the mother and the child – otherwise, it leads to the cycle of stunting. Adequate nutrition is a must in the first 1000 days of life, considering it to be a crucial window for the good health of the child. 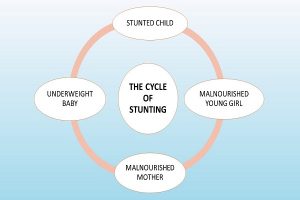 Weights given to the four indicators are as follows:

Hunger is determined by GHI on a 100- point scale, where 100 is the worst and 0 implies the best score (no hunger). The score of each of the countries is classified by severity from low to extremely alarming.

The data of the GHI components mentioned above are taken from the UN and other multilateral agencies.

India has ranked 101st out of 116 countries in the 2021 Global Hunger Index. The level of hunger India has with a score of 27.5 is “serious”. As per the reports, 15.3% of the country’s population is undernourished, while children under the age of five years who are wasted are 17.3%, and those under the age of five and are stunted are 34.7%. Estimates say that approximately 3.4% of children die before their fifth birthday. Of all countries which covered the Index, India has the highest child wasting rate. Substantial progress has been made by India post liberalization, but there still exists some area of great concern, especially, regarding child nutrition. India’s GHI score of 38.8 points (2000 GHI score) – considered alarming – has decreased to 27.5 points – considered serious. 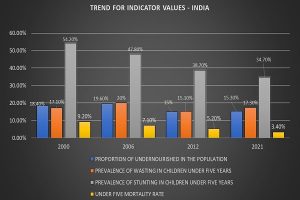 The chart beside shows that the percentage of undernourished and under fiver mortality rate has somewhat reduced and are at low levels now. Though there has been a significant decrease in stunting, still it is considered high. As already mentioned before, the percentage of stunting is highest for India and also, the percentage is slightly higher than what it was in 1998-99.

Hunger has been an issue worldwide, and the situation has worsened with the spreading of the COVID-19 pandemic. The fight against hunger appears to be going off the track in recent times. It has been assumed by some experts that the world as a whole – especially 47 countries in particular – will fail to achieve the target of having lower levels of hunger by 2030. This is based on current GHI projections. In addition to this, multiple areas have threatened food security – conflicts, global climate changes with which weather extremes are associated, immense economic and health challenges which are associated with the ongoing COVID-19 pandemic – are driving hunger. Furthermore, the hunger levels are highest in countries such as Africa, South of Sahara and the South Asia. The inequality between countries, regions, districts, and communities is spreading widely; if left unchecked, it may hinder the world from achieving its SDG mandate to “leave no one behind”. Neighboring countries of India such as Nepal (74), Bangladesh (76), Myanmar (71), Pakistan (92) are in “alarming” hunger category, but they have fared better than India, as per the reports. Regions with the highest hunger level are Africa, south of Sahara and South Asia with GHI score of 27.1 and 26.1 respectively. These hunger levels are considered serious and, in contrast with those of Europe and Central Asia, Latin America and the Caribbean, East & South East and South East Asia and, West Africa and North Africa, each of which has GHI score levels considered low or moderate.

Reasons for Controversy over the GHI Score

The GHI rank of India has come down to 101st position out of 116 countries and the Ministry of Women and child development had dismissed the ranking saying it was unscientific and without any reality. Concern Worldwide and Welt Hunger Hilfe (WHH) are blamed for not investigating properly prior release of the report. The undernourishment data provided by the Food and Agriculture Organisation has been questioned by the government, and further said that it is based on a telephone poll. Undernourishment data, among other three, is said to have deteriorated. As per the data of FAO, the prevalence of undernourishment in India rose from 14% in 2017-19 to about 15.3% in 2018-20. It has been alleged by the government that the publishing agency has adopted a selective approach, deliberately lowering the GHI 2021 ranking of India.

Further, usage of height and weight to scientifically measure undernourishment should have been relied upon, instead of the methodology which was based on Gallup poll, based on telephonic estimates of the population.

The Ministry of Women and Child Development stated that prior 2018 there was absence of growth monitoring devices at anganwadis and hence, evaluating the extent of malnutrition was impossible. The beneficiaries registered on the Anganwadi Platform, as per the real-time Poshan Tracker data, includes 7.79 crore children aged from 6 months to 6 years. The Poshan Tracker reported undernourished children to be about 30.27 lakh which is 3.9%.

However, after these allegations and statements, the German non-profit WHH claims non-usage of any telephonic polls in its GHI rankings. Usage of undernourishment indicator, assessed by FAO using Food Balance Sheet data from each country is accepted by them. The food balance sheet defines a comprehensive picture of the country’s food supply pattern during a specified reference period.