The coming of Gandhi brought about major qualitative and quantitative changes in the mainstream nationalist movement, which had developed under the aegis of the Indian National Congress. Mainstream nationalist politics had hitherto been primarily the preserve of a limited group of Western educated professionals. Thus the allegation of the colonial government of the Congress being run as a closed shop by a “microscopic minority” was in fact true to a great extent. Irrespective of the divisions among the Congress leaders, both the Moderates and the Extremists failed to achieve their stated goals. Gandhi precisely brought an end to this status quo and brought an end to the elitist character of the mainstream nationalist movement. The rise of Gandhi resulted in and was paralleled by the shift of power from the Western educated elites to the hands of the masses. Although prior to Gandhi, the extremist leaders too had sought to ensure the participation of the masses during the Swadeshi movement using new techniques of mass contact like singing patriotic songs, performance of jatras, etc, they nevertheless failed to do so and it was Gandhi who succeeded in reaching out to the Indian peasantry and secured popular support for the nationalist movement. Gandhi’s ideas for the upliftment of the downtrodden constituted a major portion of Gandhian philosophy. Gandhi was highly opposed to untouchability. He even declined to use the term untouchables and instead referred to them as the Harijans i.e. Sons of God. It was Gandhi who for the first time had made untouchability an issue of public concern, and during the Non-cooperation movement, he even concluded Swaraj to be conditioned on the abolition of untouchability.

Gandhi’s Stand on Inter-Dining and Inter-Marriage 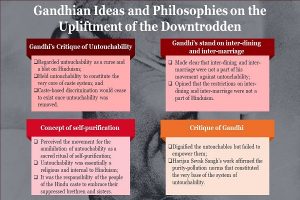 Gandhi was of the opinion that the problem of untouchability was essentially a problem of the self, which in this case was the collective Hindu self. Thus, he perceived the movement for the annihilation of untouchability as a sacred ritual of self-purification. Hence, for Gandhi the question of untouchability was essentially a religious one and that too one that was internal to Hinduism. But since Gandhi perceived the movement to obliterate untouchability as a sacred ritual of self-purification, it placed a great deal of responsibility on the Hindu caste. This was quite clear from Gandhi’s own words. According to him, it was the responsibility of the people of the Hindu caste to embrace their suppressed brethren and sisters as their very own, whom they would have to invite to their temples,  homes and schools. He further stated that the untouchables in the villages had to be made to feel that their shackles have been broken, that they are in no way inferior to their fellow villagers, that they are worshippers of the same God as the other villagers and hence, lastly, entitled to the same rights and privileges that the latter enjoy. This process of self-purification by means of the realisation of sin and practice of penance would ultimately create a sort of halo that would envelop the caste Hindu, which would look almost spiritual.

The process of self-purification resulted in a subtle way in the glorification of the individual self. This process endowed upon the caste Hindu a sort of heroic stature, which in turn culminated in the further dwarfing of the Harijan personality. Thus Ambedkar concluded that the panacea for the plight of the untouchables suggested by Gandhi placed the agency completely in the hands of the upper caste Hindus, but failed to take into cognizance the individual agency of the untouchables and therefore did not delineate the measures to be taken by the untouchables to free themselves. As mentioned earlier, the question of untouchability for Gandhi was essentially a religious question. According to a section of historians Gandhi’s campaign, though it succeeded in undermining the moral and religious basis of untouchability, failed to deal with its economic and political roots. So historians have concluded that it dignified the untouchables but failed to empower them. The Gandhian approach failed to convince Dalit leaders like Ambedkar, who favoured political solutions that could be achieved by securing guaranteed access to education, employment, and political representation for the Dalits. The Dalit leaders were of the opinion that if given a proper share of economic and political power, the gates of temples would automatically open for them as well. Besides not only Gandhian philosophy, but the program of work of his Harijan Sevak Sangh was also fraught with contradictions. This organisation tended to be highly patronising in nature whereby the leaders who were primarily upper-caste Hindus distributed soaps among the untouchables suggesting them to be clean, eat well and have pure vegetarian food in order to ensure their incorporation in the Hindu society, thus clearly affirming the purity-pollution norms that constituted the very base of the system of untouchability.