Every year, the entire nation laments the havoc wrecked by the floods in one or other parts of the nation. The memories of floods devastating Uttarakhand, Chennai, Assam, Hyderabad, and Kerala are still afresh. Not even a year passes by without the floods leaving behind trails of agony. Floods aren’t new to India. Even the highly advanced Indus Valley Civilization, according to one hypothesis, is believed to have been wiped off due to recurrent floods caused by the Indus River. However, the frequency and the scale of devastation of the recent floods are unprecedented and hence warrant a thorough discussion which we shall do in this article.

“A flood is an overflow of water that submerges land that is usually dry. It is a state of higher water level along a river channel or on coast leading to inundation of land that is not normally submerged.” So, it implies inundation or submergence of land by water due to several reasons.

India is highly prone to several floods owing to its varied geography. Out of the total geographical area of 329 million hectares, more than 40 million hectares (about 12%) are prone to floods. As per NDMA, on average every year, floods 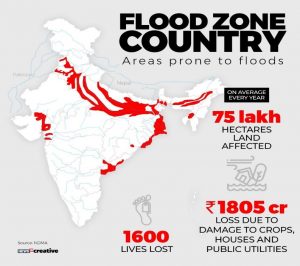 affect 75 lakh hectares of land, 1600 lives are lost and the damage amounts to Rs.1805 crores due to floods.

India’s flood-prone zones can be categorised into three regions. First, the northern plains are traversed by rivers like Ganga, Brahmaputra, Kosi, Damodar, etc. States like UP, Bihar, Assam, Uttarakhand, and West Bengal are most affected. Second, the north-western region is traversed by Indus and its tributaries. States like Punjab, Haryana, and Kashmir are most impacted. Third, central and peninsular India, which are traversed by rivers like Narmada, Tapti, Godavari, Krishna, Mahanadi, Tungabhadra, Chambal, Kaveri, etc. Gujarat, Maharashtra, Andhra Pradesh, Tamil Nadu, and Odisha fall under this.

So far, we’ve seen conventional floods. But the increasing occurrence of Flash floods caused due to cloudbursts in the recent past necessitates us to have a thorough understanding of it. Cloudbursts have become a common phenomenon in India, particularly in the Himalayan belt, wreaking havoc on lives and properties. Though flash floods due to cloudbursts are similar to conventional floods in terms of impact, their genesis varies from that of conventional ones. Hence, we shall discuss it in isolation.

Flash Floods and its Mechanism

Cloud bursts, as we have discussed earlier, are highly localized events wherein a sudden outburst of heavy rain for a short duration inundates the area. The India Meteorological Department (IMD) defines it as “Unexpected precipitation exceeding 100mm (or 10 cm) per hour over a geographical region of approximately 20 to 30 square km”.

Why do cloudbursts occur in hilly areas?

Though cloudbursts are confined to hilly areas, they usually happen in hilly areas most of the time. In hilly areas, there exists a warm air current that ascends the slope of hills. When a cloud that is already saturated and ready to downpour arrives, instead of precipitation, it is further drawn up by the air current. In this process, it draws more water from the atmosphere, and as a result, the droplets grow in size. Such clouds are called Cumulonimbus and may attain a height of 13-14 km. After a certain point, the drops become too heavy to hold on anymore and hence drop-down collectively in a quick flash.

Cloudbursts grabbed the headlines for the first time in August 2010, when they resulted in floods that devastated Ladakh, killing 250 and displacing 9000 people. The worst tragedy struck in 2013 when a cloudburst triggered floods that killed around 6000 people in Uttarakhand. Later in 2016 in Kargil and this year in Amarnath, cloud bursts have been increasingly becoming a recurrent phenomenon in the sub-continent.

Why are flash floods increasing in recent times?

Cloudbursts aren’t something that has taken birth recently. They must have been there since antiquity. But their frequency is what keeps everyone on tenterhooks. The scale of the agony that they leave behind is unprecedented and worrisome. One of the prime reasons touted to be catalysing their increasing frequency is the ‘global warming’.

Why are they difficult to forecast?

Cloudbursts are highly unpredictable and stealthy weather phenomena. They strike the landscapes without knocking the doorbells. What makes it so difficult to predict them?

– Difficulty in reaching out to the length and breadth of the Himalayas as the higher reaches are highly inaccessible.

– The duration of the events is so small that it becomes very difficult to study their mechanism thoroughly.

Case study: Uttarakhand flash floods are a classic case of the devastation by a cloudburst. The state has received rainfall 375% more than the regular average. This unprecedented downpour led to the melting of the Chorabari glacier, which culminated in the eruption of the Mandakini River. Mandakini breached its carrying capacity level and exploded. This sudden burst had flooded Kedarnath, Gobind ghat, Rudra Prayag, etc. The state apparatus failed to respond to IMD’s warnings. The public had no clue of what was befalling and were completely caught unaware. Within hours they were trapped in the structures. Villages like Gaurikund and Ram Bada were entirely wiped away in floods, leaving no signs of their existence behind. As per the researchers at the Wadia Institute for Himalayan Geology, the casualty figure reached around 30,00, although the official figure pegs it at around 6000. More than 5000 houses were raged, and many thousands were stranded.

Governments efforts to deal with Floods

However, despite these efforts from the government, Floods have repeatedly been taking a mammoth toll on India every year. Most of the government’s focus is on flood fighting rather than flood mitigation. There are many shortfalls in the execution of the statutes and policies.

Way forward: In this regard, NDMA has announced a slew of guidelines. Some of them are as follows,

Apart from these measures that are prescribed by the NDMA, government should take up the following measures as well.

Natural events like floods are inevitable. So, trying to stop them is neither practical nor advisable. Hence, our focus should be on insulating human lives and properties from the vagaries of floods and respecting nature. The recurrent floods were the domino effect of human-driven greed and human’s tendency to take nature for granted. This needs a holistic, long-term approach and a collaboration between government agencies, Scientific experts, civil societies, and the citizenry.

Closure of schools due to COVID-19 may lead to online child sexual abuse, warns IJM

Prolonged closure of schools due to COVID-19 pandemic and lockdown coupled with smartphones and high speed data, has made children vulnerable to sexual abuse online. The news highlights the affects of lockdown in society especially [Read More]

World Economic Outlook has estimated a contraction of -3% in the global output due to the COVID-19 pandemic. It has also estimated India’s growth to fall to 1.9% in 2020. The effects of COVID_19 pandemic [Read More]