Agriculture, with its allied sectors, is unquestionably the largest livelihood provider in India. Even though agriculture’s share in India’s economy has progressively declined but still provides employment to 50% of the countries workforce.

India’s production of food grains has been increasing every year, however, the agricultural yield is found to be lower in the case of most crops. A sector that is so vital and is the foundation of our economy, is suffering immensely. We are so accustomed and reluctant about the news like farmer suicides, crop failures, credit problems only because of the idea of the “Trickle Down effect”, that got dissolved in every part of our brain cells. It is so much so that even after knowing 60% of the population of our nation depends on it for their livelihood. Providing with facilities, developing infrastructure, etc. is only benefitting the creamy section(mostly urban population/ elite class) of our society. Then definitely, expecting a smooth, pleasant ride to reach our destination – India, as a developed nation or topmost and largest economy of the world, will only be in our imagination. Younger generations are waiting eagerly when they will be able to read the word ‘Developed’ instead of ‘Developing’ before India.

Economists, advisors of the government, and every other institution are doing their part to cope up with situations like- crop failure, farmers strike and protests, inflation, and the shortfall in the supply chain. Saving farmers from exploitation in the hands of the money lenders and to reduce farmer debt initiatives like farm loan waivers and other banking schemes are being implemented. Governments who came in power have tried different measures to provide a protected environment for the farmers. Schemes and funds are being allotted. Commissions are being set up, with eminent people presenting their reports. Researchers are working all around the world, tirelessly.

So now let’s look into the current situation,’ HOW’ Government with help of NITI Aayog is focusing/dealing to boost the Farmer’s Income and on the issue of ‘Food Security’ for an increasing population of India. The government schemes, projects, and programmes that are taken up, are as follows:

Now lets understand the impact of the joint initiative taken by the Government of India and RBI (joining hands with all other types of banks or institutions) on agriculture credit policy and its performance- with the help of the graphs given below: 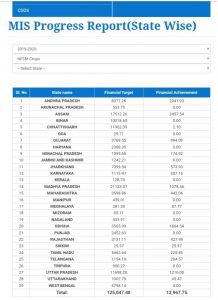 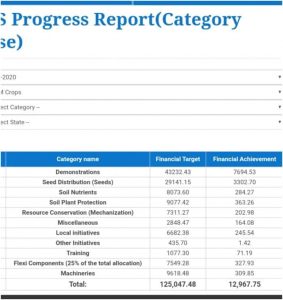 So from the above discussions we are able to understand how the government with other institutions are trying to take steps to improve the condition of our farmers-by giving subsidies, fixation of MSPs, arrangements are made to give short term loans and Farm Producers Organizations are being set up. Even then we are not getting any satisfactory results. These lead to an unprecedented increase in farm loan waivers (indicating strategic default), which is in turn putting a huge pressure over the ‘Banking Sector’.
So ‘what if’ we try to look at this crisis from the other side of the prism. Let me try to explain it with the help of a diagram. Chain diagram is in descending order (highest priority to less priority)
Mega food parks (food processing industries) > E-NAM > Promotion sustainable animal husbandry (or alternatives, so there is less fluctuation in farmers income) > improving infrastructure (cold storage, road and other transportation facilities) > Credit and Insurance

So if we shift our focus from the credit, insurance, and subsidies by setting up and upgrading the conditions with new technologies of Mega Food parks (processing industries). First, not only there will be an exponential rise of its share in India’s GDP but will also in turn help to reduce the unemployment rate in India (mostly disguised unemployment, seasonal unemployment, and frictional unemployment in rural or suburban parts).

Second, by focusing on the food processing sector, it will, in turn, encourage the farmers to grow vegetables, fruits, and other perishable items. At the time of surplus production half of their items can be sold in mandis and the rest can be processed. Currently we see, during bulk production, farmers are unable to sell their products or even store them, leading to farmers’ debt crisis. MSPs for every perishable item are not covered under schemes, this situation forces them to deviate and produce grains that are easy to store or items that are not perishable goods. NITI Aayog with M/o Agriculture and Farmers’ Welfare launched PM-AASHA to deal with this crisis. A very common news we come across, during the surplus production of onions when the price of onions drop as supply is high and due to lack of storage it is dumped in highways with which locals make ‘THARRA’( locally made liquor). When supply decreases and demand goes up, few common steps are taken by our governments: import is encouraged as compare to normal period and export supplies cut short which in turn discourages export businesses. Making and establishing the industry may be on the PPP model is the need of the hour. Besides, footloose industries can also be set up for work like packaging, grading, sorting. Rather than establishing it in a spread-out manner consolidating them would ease the management and supervision of these industries.

Third, a very common myth among consumers we get to hear, is that processed foods are not at all healthy. Industries need to follow the guidelines of FSSAI maintaining their quality according to international standards and simultaneously raising their awareness in order to compete with global markets.

Fifth, improving infrastructure, like a cold storage facility, improving transportation. Research and Development need to be encouraged, improvement in technology is necessary, etc. Efforts are required to make agriculture totally scientific by focusing more on hydroponics and aeroponics agriculture (specified regions only) and increasing the area under irrigation system.

Sixth, throughout our past and even in present credit and insurances, subsidies, financial assistance, and have given enough focus, by implementing schemes, reforming the banking sector. RBI making rules for commercial, cooperative, developmental banks, encouraging priority sector lending. Even then the situation is becoming worse and climate change is adding another cause to it. So it’s better to start taking action on the above points. Even reports that are being published by the Ministry of Agriculture made us aware that we are not able to utilize the financial assistance properly.
Taking a chance and looking into the issue slightly from a different angle, might help us to reach our destination. Farm loan waiver, defaulting of loans, and increasing NPAs create pressure over the banking sector. Increasing debt lead to a number of farmer suicide cases, strikes that are rampant in our Capital city. India is among the bottom nation in the Global Hunger Index.
This reverse-cycle might increase the income of the farmers, with the availability of transport, infrastructure, market, credit facility, and alternative job opportunity. Implementing a region-wise policy. Eminent economist Abhijit Banerjee though lauded NREGA scheme but gave advice to government “ they should make policies that work”. He expressed his disapproval of “willingness in India to announce a policy” because it “sounds good”. Even it is necessary to do a prior ground level survey and short trials, as we already see the effects of the Green Revolution leading to environmental and regional disparity even though production has increased.

(Pratyusha graduated from Shri Shikshayatan College with Geography-major. You can contact her for further queries @ pratyusha.debnath22195@gmail.com)

N.B.: We encourage our subscribers to contribute regularly. With one request that the write-up should be an original one. You can send us your article at info@currentaffairsreview.com…

The article talks about the shift from decade old policy of giving free electricity to farmers to introducing a policy of Direct Benefit Transfer. The article compares the benefit of both the schemes and it [Read More]

Growth and the farmer: Consumer bias in food policy reduces incentives for farmers

This editorial discusses how to increase the income of farmers in our country. This news is related to the topic, Major crops cropping patterns in various parts of the country, different types of irrigation and [Read More]

Amid the newly announced goal of becoming self-reliant and the huge economic stimulus, a central law is being planned that would allow barrier-free inter-state trade and ensure a legal framework for contract farming. [Read More]