These days we Indians have habituated to waking up to news of Rupees hitting new lows against US Dollar with each passing day. It has fallen by 25% since 2014 and has hit an all-time low of 80 rupees per dollar. The trend over the past few months has been worrying. The exponential fall in the recent past has been exacerbated by the ongoing Ukraine war that has sent economic shock waves across the globe. In the era of globalisation, shielding oneself from the external factors is next to impossible. As a result, there are no visible signs of rupee regaining its strength against dollar in the near future.

Before discussing about the repercussions of falling rupee vis-à-vis dollar, let us first understand what does falling of rupee mean?

What is the Currency Exchange Rate?

In simple terms, it is the amount of currency one country shells for buying one unit of a foreign country’s currency. At present Rupee exchange rate vis-à-vis dollar is 80, which implies that we need to spend 80 rupees in exchange for 1 US Dollar. This implies that dollar is eighty times stronger than rupee. Well, but who decides the exchange rate? But before understanding it, let’s discuss briefly about different exchange rate systems.

Flexible Exchange Rate System – Under this system, governments do not interfere in setting the exchange rate. Rather, the exchange rate is left to be decided purely by the market forces. The demand for foreign currency is weighed against its supply in the domestic market, and the exchange rate is achieved. The supply of foreign currency is facilitated by exports, tourists, foreign loans and grants, etc. Similarly, demand is raised by the outgoing tourists, imports, loan repayments, etc. The developed economies usually practise this system.

Managed float exchange rate – As the name suggests, it’s a hybrid between the fixed and floating exchange rates. Usually, the exchange rate is decided by market forces. But, if the rate deviates alarmingly from the expected value, then the government intervenes to restore the normalcy. For this, the apex bank maintains reserves of foreign exchange to come to the rescue in times of contingency. This is also called ‘Dirty Floating’.

Today most of the countries are increasingly practising free floating/flexible exchange rate systems.

Evolution of India’s exchange system – Since independence, India has passed through several economic turbulences and external dynamics. As a result, India has adopted different exchange rate regimes at different phases of its economic ascendency ranging from fixed exchange rate regime where the Indian rupee was pegged to the pound sterling owing to the historic links with Britain to a basket-peg during the 1970s and 1980s and Managed floating system at present.

So, with this understanding about how exchange rates are discerned, we shall now move to the next topic to understand the reason behind falling Rupee vis-à-vis US Dollar.

Why is Rupee Falling?

The rupee has plunged nearly 6.5% since the start of the year, and the primary contributors to this anomaly are,

Ukraine-Russia war: As Russia invaded Ukraine earlier this year, it has sent ripples across the economic map of the world. It has destabilised the economies of many countries. As a result, investors are looking for safe havens. Consequently, even India has been witnessing an outflow of dollars from the Indian market. This has resulted in a Dollar crunch in India.

Better rate of returns in the USA: Despite the RBI taking several measures to attract inflow of the foreign currency, it will take some more time to fructify the initiatives. American bond yields are currently providing more rate of returns compared to the rate of returns by any Indian investments. Thus, investors were dissuaded from investing in India at the cost of losing more returns from investing in America. The rate is close to 3% in America for deposits with tenure between 2-3 years, whereas it is far lesser in India.

Widening Current account deficit: Due to the surge in imports and decreased exports, there is a shortfall in the inflow of dollars into India. Increased oil prices and coal prices have been the biggest contributors to the swelling imports bill in the recent past. Ballooning CAD would automatically weaken rupees against foreign currencies as the outflow of rupees far outweighs the inflow of foreign currencies, especially the dollar. 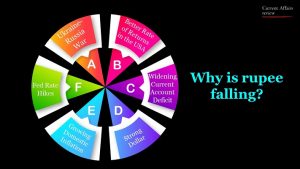 Experts reckon that India’s CAD is headed towards touching 3.2% of India’s GDP, up from 1.2% last year.

Strong Dollar: The US dollar has been strengthening as global investors are queuing up to invest in USA. The dollar index, which tracks the dollar currency against a basket of major currencies, has increased by over 9% this year which is the highest in the past 20 years.

Growing domestic inflation: A country with higher inflation would have lesser demand for its products abroad. Lower demand would dampen exports and thereby reduces dollar inflow into the country. At the moment, inflation in India is on a steep rise due to various factors like the pandemic, increase in crude oil prices, the Ukraine war, etc.

Fed Rate hikes: Meanwhile, USA has increased its interest rates. As a result, investments in USA are yielded richer dividends than elsewhere. So, naturally, all the FPI are flowing out of countries and converging in USA.

Why is it a Concern?

Since India being a net importer and a large chunk of Indian imports are based on dollar payments, it would have a domino effect on the Indian economy. Inflation would reflect on a range of products as the impact of crude oil prices pervades almost every industry. CRISIL, the rating agency, reckons CPI inflation to hit 6.8%, which would be the highest in the past 9 years and which is well above the RBI’s target band of 2-6%. 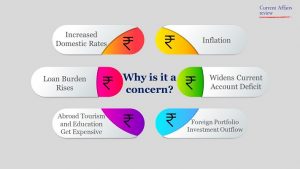 Widens CAD: Due to the surge in import bills, the CAD is poised to bloat further. India’s trade gap has already widened to a record high of $26.18 billion in June. This would deplete our forex reserves in the absence of additional net dollar inflow. With the global economy stagnating, the demand for Indian exports is not expected to rise. As a result, CAD is inevitably heading towards widening.

FPI outflow: The weakening rupee against the Dollar and the subsequent repercussions force the FPI investors to withdraw their investments from Indian markets and channelise them to safe havens like USA. As a result, this would further weaken rupee vis-à-vis dollar in a spiralling manner. So far, in 2022 alone, FPI worth 23 billion dollars have flown out of India.

Loan burden rises: India has to pay back more amount than what was estimated before due to the falling rupee. This would eat away a significant chunk of our capital expenditure.

Increased domestic rates: Inflation would force RBI to increase the rates to absorb some amount of money from the market to contain the inflation. As a result, the interest rates on loans that the banks will charge would shoot up.

However, on the flipside, weakening rupee offers scores of advantages as well.

How to Arrest the Slide?

– Reduce the dependence on imported products. By preferring the local products in line with Make in India and Atmanirbhar Bharat, we can reduce the demand for Dollars.

– Find the alternatives for Crude oil, as crude oil bill constitutes the highest share in import bill. India should explore more renewable sources to fuel its economy rather than entirely depending on the imported fossil fuels.

– By stabilising the economy and bringing it back on the growth track, India can foster confidence among the global investors. When investors see India as a safe haven for their money, forex would automatically start flowing into India.

– India should diversify its supply chain mechanism for imports so that external turbulences like Ukraine war wouldn’t have a disproportionate impact on India.

– India should focus on increasing its footprint in global trade by increasing its exports. In sector like IT, Pharma, Textiles, Jewellery, etc., India should leave no stone unturned to climb up the ladder and become the world’s supply hub. This again would strengthen the Rupee.

– Easing the terms & conditions for External commercial borrowing would ensure the flow of dollars into the country.

As we have discussed earlier, India practises Managed floating rate system. As a result, sensing the need to arrest the further slide of rupee, Govt and RBI has taken a slew of measures like

– Rise of taxes on exports of Petrol, Diesel, and ATF.

– Limit borrowing: Under liquidity adjustment facility (LAF), the RBI has limited the REPO by the banks to 75,000 crores. As a result, banks have to look for market borrowings for additional funds, which results in yield drops. This would attract more foreign investments.

– Any additional borrowing over the LAF threshold attracts higher interest rates, and this is called the Marginal Standing Facility rate. This has been increased from 2% to 10.25%.

– The RBI has also increased the bank rate by 2%.

However, we don’t have to hit the panic button as of yet. Rupee is still performing better than many of the other foreign currencies vis-a-vis US dollar. Dollar has strengthened against most of the global currencies and not just against Indian Rupee. The US Dollar Index has spiked by 13% this year against six major currencies of the world, i.e., euro, pound, yen, Swiss franc, Canadian dollar, and Swedish krona. The weakening of the Indian rupee shouldn’t be regarded as an isolated case. Rather it should be regarded as a part of global turbulence caused primarily due to the Ukraine war.

Once the global turbulence triggered by the afore-mentioned war, rise in crude oil prices, and consequent slowdown of global economy; relapses, the Indian rupee, in all likelihood, would restore back to its strength. Furthermore, our mammoth forex reserves provide us a cushion during tough times like these. However, India should exercise adequate caution to navigate through the present rough waters till the storm subsides.

This is a classic example that shows that autonomous organizations are not in convergence with the govt. The article shows that the numbers provided by both differ by a huge number. The difference in numbers [Read More]

Five Rafale jets take off from France to India