The rise of nationalism at an organized level on top in India, which seems to have emerged in the late 19th century, is one of the most contentious issues that has generated vigorous debate among scholars. Nationalism in places like Asia and Africa, for long time had been argued to owe its origin to a set of modular forms dispensed by the historical experience of nationalism in Western Europe, the Americas, and Russia. This theory that declines to take into cognizance the intellectual agency of the people in Asia and Africa in shaping their own history has come under severe scrutiny in later times whereby scholars have argued that such a theory upholds Europe and the Americas as the sole subjects of history who have chalked out for the rest of the world not merely the script of colonial enlightenment and exploitation but also that their anti-colonial resistance and post-colonial misery.

But in fact, the most creative results of nationalism imagination in places like Asia and Africa have betrayed more of difference rather than identity with modular forms of nationalism endowed by the modern West. This confusion, according to some scholars, is engendered by the understanding of nationalism as a solely political movement, the initiation of which is traced to the foundation of the Indian National Congress, while reducing the period prior to that, i.e., between the 1820s to 1870s as a period of preparation and social reform when nationalism had not yet emerged. Anti-colonial nationalism, as per a group of scholars, can, in fact, be traced to a time even prior to the inception of the political struggle against the colonial rule whereby the nation was imagined in a private cultural sphere that was perceived as sovereign and it was from this cultural construction of an autonomous space from early 19th century that the inception of Indian nationalism can be gauged.

Several factors such as the increasing racial tension, threat of conversion, and the reforming fervour of the Benthamite administrators propelled the educated Indian elites to thoroughly scrutinise their own culture, culminating into what has been described by scholars as the ‘objectification of culture’ whereby the Indian culture was upheld as a concrete entity. This novel cultural project which partly manifested itself through the socio-religious reforms of the 19th century that is often referred to as the period of Renaissance, intended to bring to fore the pristine, unsullied character of the Indian civilization and culture which though conformed to the ideas of the modern world such as rationalism, empiricism, monotheism, and individualism, but was nevertheless not Western. The world of social institutions and practices was divided into two spheres, namely the material and the spiritual, whereby it was argued that while in the material world the supremacy of the West was undisputed, but as far as the latter was concerned which in fact bore the essential marks of cultural identity, the Indian civilization was, in fact, superior to the West and that it was highly imperative to preserve the distinctness of this spiritual culture. This sense of pride concerning the spiritual primacy of the Indian culture did not merely aid the process of reorganizing the private sphere of life but also served as the ideological ground that aided the confrontation of the colonial state in the newly emerging public space. This ideology was nevertheless fraught with various contradictions. Extolment of the spiritual heritage of India often became tantamount to an uncritical and obscurantist defense of all the customs and practices of the past. Furthermore, the roots of Indian tradition being traced to the classical Sanskrit texts, Indian tradition became coterminous with Hindu tradition, thereby creating an identity that albeit succeeded in uniting upper-caste Hindus against the colonial rule but at the same time alienated other sections of the Indian society such as the Muslims, non-Brahmans, and untouchables, thereby sowing the seeds of communalism.

Western education played a very crucial role in the development of nationalism in India. Now the rationale behind 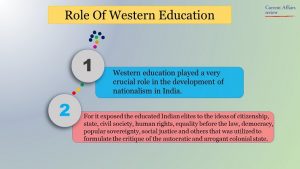 the introduction of Western education in India by the colonial masters despite being the achievement of the complete colonization of minds of the Indian intelligentsia thereby ensure their loyalty, but consequently there was what can be described as selective appropriation and manipulation of it that in turn was utilized to weave the critique of colonialism. For it exposed the educated Indian elites to the ideas of citizenship, state, civil society, human rights, equality before the law, democracy, popular sovereignty, social justice, and others that were utilized to formulate the critique of the autocratic and arrogant colonial state.

The early nationalist ideology being primarily rooted in the idea of a glorious Hindu past, albeit succeeded in inspiring a wide range of people but at the same time also failed to bring within its aegis certain sections of the Indian population. Indian nationalism having at times become tantamount to an uncritical defense of Hindu religion and the glorification of Hindu opposition of foreign interference, culminated in the isolation of sections such as the Muslims or non-Brahmans from mainstream Indian nationalism. This period witnessed the development of a new consciousness among the latter as well, who too began to define their own self-interests, and colonial politics further widened this schism. Thus, the early nationalist ideology proved to be both inclusive and exclusive at the same time.

Extremists and their Influence in Consolidating Anti-British Agitation

The latter half of the 19th century witnessed a steady growth in the political consciousness of the people. However, the leaders hardly succeeded in attaining any concessions from the British masters, and the colonial exploitation [Read More]