The latter half of the 19th century witnessed a steady growth in the political consciousness of the people. However, the leaders hardly succeeded in attaining any concessions from the British masters, and the colonial exploitation of the country continued to persist simultaneously as well. Discontent eventually spread among the rural gentry, peasantry and workers. Under these circumstances, the methods of the moderate leaders, which involved pleading with the Government for reforms, grew less and less popular. It was this very period that witnessed the rise of a large number of new leaders who were characterised by their radical demands and who were known for believing in what can be described as a more militant form of nationalism. These figures were popularly known as the Extremists. The extremists were highly critical of the moderate style of politics, which came to be denounced as too cautious and as politics of mendicancy. Contrary to the earlier moderate leaders whose main support base constituted of the intelligentsia and the urban middle class, these new leaders grew popular among a more wider circle of lower-middle classes, students and even a section of workers and peasants. Extremism primarily developed in three regions, namely Bengal under the leadership of Bepin Chandra Pal, Maharashtra under Bal Gangadhar Tilak and lastly in Punjab under that of Lala Lajpat Rai. As far as other areas are concerned, extremism, albeit not absent but was nevertheless less powerful.

Factors leading to the rise of extremism

The rise of extremism has been attributed to myriad factors. Some historians are of the opinion that this development can to a great extent be ascribed to the rising factionalism, for indeed this period witnessed a great amount of faction fighting at almost each and every level of organised public life in the country. Factionalism in Bengal is quite evident from the division that was noticeable within the Brahmo Samaj. Besides, there also developed a bitter journalistic rivalry between the two leading newspapers, namely the Bengalee that was edited by the moderate leader Surendranath Banerjee and the Amrita Bazar Patrika that was edited by the more radical Motilal Ghosh. Mention may also be made of the conflict that developed over the issue of editorship of the Bande Mataram between Aurobindo Ghosh on the one hand and Bepin Chandra Pal and Bramhabandhab Upadhyay on the other. Again Maharashtra witnessed a serious conflict between the leading figures like Gokhale and Tilak over the issue of control of the Poona Sarvajanik Sabha. This became most apparent when following the capture of the organisation in 1895 by Tilak, Gokhale began his rival organisation named the Deccan Sabha. As far as Madras is concerned, it was marked by the triangular conflict between the three groups, namely the Mylapur faction, Egmores and lastly the suburban elites. Lastly, in Punjab, following the death of Dayanand Saraswati, the Arya Samaj came to be divided 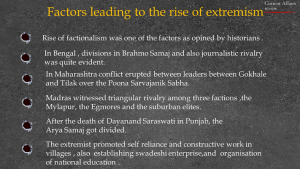 among the more moderate College group and the radical revivalist group. Thus given the situation, it may seem that the division between the moderates and extremists was merely another instance of faction fighting that has afflicted organised public life everywhere in the country during this period. However, such an explanation does not capture the whole picture. Such a theory most importantly overlooks as to why a dissident group at the very first place would be interested to capture the Congress. Rather, it was not even a real political party with power and patronage opportunities but also more of an annual platform with highly inadequate funds, had it not had certain alternative strategies and ideals to put forward. Besides, such a theory fails to take into cognizance that discontent with moderate politics was undoubtedly one of the primary factors responsible for the rise of extremism. The extremists were highly critical of the method of mendicancy followed by the moderate leaders to appeal to British public opinion as they perceived it as immensely futile and dishonourable. Besides, they also denounced the moderates for being restricted to the English-educated elite and thereby remaining mostly alienated from the common people. Instead of the methods of prayer and petition, the extremists emphasized on that of self-reliance and constructive work that was characterised by the initiation of swadeshi enterprises, organisation of what came to be described as national education and emphasis on the need of constructive work in the villages.

The extremists concluded their ultimate goal to be swaraj. However, they were by no means unanimous when it came to the interpretation of this ideology. For Tilak, swaraj implied Indian control over the administration, but this could nevertheless not be translated as a total severance of relations with Britain. Again Bepin Chandra Pal, being convinced that self-government was by no means possible under British paramountcy, concluded swaraj to mean complete autonomy and absolute freedom from British control. Aurobindo Ghosh, too concluded swaraj as tantamount to absolute political independence. However, mostly the extremists viewed swaraj as a self-rule within the parameters of British imperial structure. The radicalisation was evident from the transformation noticeable in the method of agitation that shifted from the prior method of prayer and petition to passive resistance. This was carried out through violation of the unjust colonial laws, boycott of British goods and institutions and even more importantly, the subsequent development of indigenous alternatives, which is swadeshi and national education. The ideological roots of this new trend of politics can be traced to the new regional literature, which aided the process of defining the Indian nation in terms of its distinct cultural heritage and civilisation. This was to a great extent a revivalist discourse whereby an imaginary golden past was invoked, utilising symbols derived from a retrospectively reconstructed history that it in turn was meant to arouse nationalist feelings. Some historians are again of the opinion that this can also be, to a great extent, characterised as a response to the gendered discourse of colonialism which concluded a teleological connection between masculinity and political domination whereby it was argued that the colonised society being essentially effeminate, were therefore unfit to rule. This, in turn, created a strong urge among the latter to attempt to recover their Ksatriyahood from an imagined Aryan past for the purpose of establishing their right to rule. As a result of all this, historical figures who had hitherto shown valour and prowess now came to be glorified as national heroes. Thus Tilak initiated the Shivaji festival in Maharashtra in April 1896. Eventually, such ideas gained popularity in Bengal as well, which witnessed a craze for national hero worship. The Marathas, Rajputs and Sikhs, who had been concluded by the colonial discourse to be the martial races of India, now found a position in Aryan tradition and were endowed with the halo of national heroes. Historical figures like Ranjit Singh, Shivaji, Pratapaditya, Sitaram and even Siraj-ud-daula came to be projected as martyrs of freedom. There also developed a physical culture movement that involved the founding of numerous gymnasiums in various parts of Bengal for achieving the reclamation of physical prowess. In addition to this, the leaders emphasized on ancient Indo-Aryan political traditions as alternatives to Anglo-Saxon political systems. The Indian tradition was concluded to be more democratic, whereby it was argued that the concept of dharma kept the arbitrary powers of the king in check. The examples of the republican traditions of the Yaudheyas and Licchavis were cited to establish the presence of a strong tradition of self-rule among the Indians. This directly challenged the both the colonial and moderate discourse on the British rule being an act of providence for the purpose of preparing the Indians for the task of self-governance.

The extremists undoubtedly had several limitations, but we can nevertheless hardly overlook the fact that extremist ideology played a very crucial role in arousing nationalist feelings and also developing a nationalist ideology that in turn proved to be critical for the purpose of development of the nationalist movement in the course of time. Contrary to the earlier moderate leaders who attempted to develop the Indian nation through a modernistic course, the extremists, having perceived modernism itself as a western concept that in turn would imply the advocacy of continuation of British rule, attempted to counter the colonial rule by arguing in terms of non-western paradigm. Thus they sought to define the Indian nation in terms of symbols and idioms that were strictly speaking Indian in nature. This nevertheless eventually culminated in religious revivalism invoking a glorious past that, in turn, at times, even became tantamount to uncritical acceptance of the glorification of this past.

Interconnectivity between the Renaissance and the Growth of Indian National Identity

The British conquest and the dissemination of colonial culture and ideology that followed in the wake of it resulted in an inevitable introspection concerning the strengths and weaknesses of indigenous culture and institutions. The educated [Read More]

Role of The Colonial State in The Growth of Identity Politics

The Indian National Congress, albeit should be credited for engendering the process of arousing political consciousness and furnished the idea of a nation united by the same problem of economic exploitation by colonialism, it nevertheless [Read More]