The prosperity of science & technology in India isn’t something that is decades or a few centuries old. Rather, it’s a millennium-old tryst. Since ancient times, science and technology have been flourishing in India. The Indus Valley civilization, touted as the world’s first urban civilization, stands testimony to the advancements that India has made in the field of science since the early period. However, due to the repeated invasions during the medieval age, Indian science came to a standstill and started stagnating. The colonization has further regressed the spirit of scientific endeavours in India, which resulted in scientific pursuits hitting a new nadir in the sub-continent during the period spanning between the end of the medieval age and the independence.

Following the withdrawal of the British, India inherited a landmass that was stripped of its ancient scientific knowledge and had to begin from ground zero. Fortunately, nascent India is blessed with eminent leaders like Jawaharlal Nehru, who showered a special focus on building science and technology in India from scratch. Since his first initiative in this direction, i.e., Scientific Policy Resolution 1958, India has managed to grow into a huge network of science ecosystems. Today, India boasts of a huge network of over 16,000 colleges, 600 universities, 2000 research and development institutes, and over 4 lakh science professionals, including some of the top scientists, and CEOs of the mega MNCs, as per the official data of 2011. However, this journey hasn’t been accomplished overnight. It took seven decades and four national policies to position ourselves in the world atlas of science and technology. So far, India has notified four science and technology policies and is on the brink of notifying the fifth one. Let’s discuss each in detail.

Our first stride towards embracing science in Independent India can be traced back to the year 1958. This two-page document was formulated by the government headed by India’s first Prime minister, Jawaharlal Nehru. However, it is widely believed to have been drafted by India’s legendary physicist, Homi Jehangir Bhabha, the first scientific adviser to the Indian cabinet and a close confidant of Nehru. 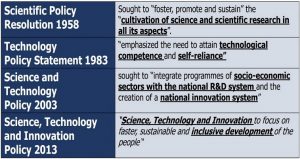 The scientific enterprise in India dawned from this resolution. The intellectual motive behind the resolution was to use science as a tool for national development. Nehru, since his early stint as leader, envisaged a welfare state to uplift impoverished India. He felt that the welfare state could be fast-tracked by employing science to telling effect. He looked at science through the prism of the socio-economic needs of India. India was blessed with an abundance of raw materials but lacked the resources to tap them and use them for national development. Hence, he wanted to leverage science to channel our natural resources into effective use for welfare and development activities. The policy also envisaged science to slim out the discrepancies between the rich and the poor. Thus, the SPR-1958 looked upon science and technology as a great enabler of nation-building and economic prosperity for the nation.

It was imperative to develop a pool of scientists to pioneer India’s scientific ambitions. So, the policy exclusively

mentioned its importance and made provisions to curate a culture, environment, and mechanism where the knowledge of citizens can bloom and prosper. The policy also emphasizes creating adequate opportunities for citizens to channel their scientific knowledge.

SPR 1958 is predominantly a science policy with little emphasis on technology development, as it was assumed by the think-tank that unless there is a strong foundation made of science, technology cannot be built. In tune with the policy, scores of investments flowed into this field, and as a result, several national scientific institutions sprang up in no time. Thus, SPR 1958 could be hailed as the foundational stone of India’s science and technology ecosystem.

SPR 1958 stood tall all alone for 25 years until the arrival of its successor, TPS 1983. It was formulated by the government headed by Smt. Indira Gandhi. Unlike its predecessor, TPR is spread across many pages, discussing various aspects at length. It was unique in many aspects.

Some its core features were;

In order to fructify the document, the implementation and overseeing committee were constituted. It is mandated to provide timely guidelines to the ministries. A technology development fund was initiated to facilitate financial assistance to the industry. TPS was also wary about the prospects of emerging and future technologies and their applications in the country’s development. As a part of this, the Technology Information Forecasting and Assessment Council (TIFAC) were established.

However, with the advent of LPG reforms in 1991, many of the core credentials of TPS were diluted as some of its mottos, like excessive emphasis on self-reliance & indigenous technologies, were at loggerheads with the free-market economy that India had just begun to embrace.

STP-2003 signals a shift to a post-liberalization world that’s been taken over by globalisation, knowledge-based economies, and international competition. By the dawn of the 21st century, India had established an intricate network of scientific institutions and raised decent human resources. However, there were drastic changes in how science was practised and the areas of its applications. This shift necessitated huge investments in R & D, a multi-disciplinary approach, and multinational collaborations.

With unprecedented advancements seen in the IT field and the democratisation of the internet, and globalisation happening at break-neck speeds, science has begun to impact almost every aspect of life. In particular, the growth trajectories of nations are intertwined with science and technology. In this backdrop, in order to stay relevant in the competitive world and to meet our own aspirations, STP-2003 was formulated by the government.

Its core features include; 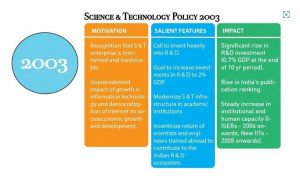 When it comes to the appraisal of the policy, there was a significant spike in the overall investment in R&D, coming from both the public and private sectors. Ten years down the line, India’s investment in R & D reached a global average of 0.7% of the GDP, albeit far away from what was envisioned by the policy. There was also a huge leap in the publication rankings. Increasing in the number of Ph.D. students, better human resources, increased filing of patents, mushrooming start-ups, etc., can be attributed to the policy.

The decade 2010 – 2020 was announced as a decade of innovation by the incumbent Prime Minister, Manmohan Singh. It was acknowledged that in order to stay afloat in global competition, it was imperative to re-align the existing economy into a knowledge-based economy. As the name suggests, the central focus was beamed on “innovation”. The key themes of the policy were building a healthy innovative environment, and linking science & technology with socio-economic aspirations.

Some of the salient features: 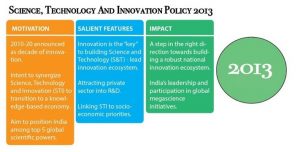 It was successful to the extent that it attracted many private players to participate and invest in R & D. It also heralded pathways for India to participate in global mega-science projects like Laser Interferometer Gravitational-Wave Observatory (LIGO), the International Thermonuclear Experimental Reactor (ITER), the Large Hadron Collider (LHC—CERN), and the Square Kilometre Array (SKA), etc. However, it is too early to comment on STIP 2013’s success as not even a decade has passed since its execution.

The Government of India is all set to launch its 5th “National Science, Technology, and Innovation Policy”, which was formulated jointly by the Office of the Principal Scientific Adviser (Office of PSA) and the Department of Science and Technology (DST). The overall aim of the policy is to attain technological self-reliance and position India among the top three scientific superpowers in the coming decade.

Salient features of the draft:

What’s weighing down our scientific aspirations?

As the adage goes, “Happy families are all alike; every unhappy family is unhappy in its own way,” implying that all the technologically advanced and successful nations share common traits like early leadership, institutional autonomy, timely funding, and rich human resources, to name a few. In contrast, the reasons behind failures are diverse. They are country-specific. They could range from absence of leadership, lack of institutional autonomy, organization-specific reasons, and industry-specific reasons.

When we speak of science and technology’s progression in India, we haven’t reached the point that our multiple policies have periodically envisioned. The inordinate delays (more than three decades) encountered in the development of the Kaveri engine for India’s LCA (light combat aircraft) plans bring India’s poor state of scientific ecosystem to the limelight. As we have seen above, there are myriad reasons why things have gone wrong for India, a few of which are:

However, not all is doom. Over the course of seven decades, India has championed a few sectors, made significant inroads into many other sectors, and is on the cusp of venturing into many more sectors. Even the government hasn’t been sitting idle. Rather, it has rolled out many schemes such as NIDHI, INSPIRE scholarships, VAJRA, KIRAN, Ramanujan Fellowship of the Science and Engineering Research Board, etc. These initiatives have culminated in positioning India on a global scientific atlas, as is evident by the following stats;

These achievements are obviously a matter of joy. But much is yet to be done if we want ourselves to be positioned among the elite league of scientific superpowers of the world, as was envisioned by the STIP-2020 draft. For this, India needs a course correction.

Being amongst the world’s top three scientific superpowers is by no means a joke. India, as of today, isn’t anywhere close to it. But it isn’t bereft of the potential to be one. The following measures would go a long way in unlocking the latent potential.

India has so far notified four policies, and the fifth one is around the corner. The motto of policy documents should be to set priorities & a route map for future endeavours and also to work up on the shortfalls of the previous policies. A new policy document that doesn’t take into account the reasons behind the shortfalls of the previous policy wouldn’t yield any better results than its predecessor. Hope the upcoming policy document would be wary of this and address the lacunae.

Since Facebook made the bold move of placing all of their tech sectors in a single Metaverse basket, even changing the company’s name to ‘Meta,’ the concept has captivated the world. While some see it [Read More]

In definition, a Ponzi scheme is an investment plan that lacks a reliable source of income or profits to provide “returns” to investors. Old investors receive returns from fresh investments that are made on a [Read More]

Environment Impact Assessment Act governs how the threat posed by large infrastructure projects to the environment ought to be evaluated. Recently a draft EIA notification was released that proposes to reduce the time given to [Read More]