India, on 15th August 1947, after years of difficult freedom struggle, attained independence from the oppressive British rule. At the time of independence, the Indian economy was predominantly rural and agricultural in character. About 85% of the Indian population supported their livelihood with agriculture and allied activities, but still, the country was not self-sufficient in food. Industries did exist then but accounted for very little in the GDP. The illiteracy rate in India was abysmally high, and so was the mortality rate. These issues of rampant poverty, poor healthcare services and widespread diseases were made more prominent by an unequal distribution of resources between different groups of people in the country. Taking all these together, the newly independent India was underdeveloped, and chalking out a proper developmental plan for the country was the responsibility of the leaders who fought for independence. In this backdrop, the Five-Year plan was implemented.

In the previous part “Evolution of Indian Planning: From Five-Year Plan to NITI Aayog (PART-I), we have discussed about the history of planning commission, and its development and subsequently the first four Five-Year Plans. In this part, we, will move further discussing the remaining Five-Year Plans and the Era of NITI AAYOG.

The Fifth Five-Year Plan (1974-79), the final draft of which was prepared and launched by D.P. Dhar, focused on the removal of poverty (Garibi Hatao), along with self-reliance – recognizing the fact that industrialization and growth would not improve the living conditions, especially of the poor. The Minimum Needs Programme (MNP) was introduced in the first year of the Plan and focused on providing basic minimum needs of individuals and improving their living standards. The 20-Point programme, launched in 1975, had similar objectives. To accommodate increasing traffic, Indian National Highway System was introduced. Due to a change in government at the centre, the Plan was terminated in 1978. A steady increase in the growth rate of the economy began from this Plan which continued to the eighth Plan.

Due to political issues, Morarji Desai of the Janata Party resigned, and after new elections when Indira Gandhi came to power, the Sixth Five-Year Plan (1980-85) was resumed. This was the beginning of economic liberalization in India. There has been a shift in the industrialization pattern, where a lower emphasis was given to heavy industry, and more focus on infrastructure began here. On the recommendation of the Shivaraman Committee for the development of rural areas, NABARD was established in July 1982.

The Seventh Five-Year Plan (1985-90), led by Rajiv Gandhi as PM (succeeding Indira Gandhi after her death), laid stress on increasing the level of productivity of industries by improving technology. Liberalization was further enacted by him – where certain businesses and industries were exempted from licensing requirements, resulting in a boost in industrial growth. The private sector was allowed to progress into areas where it was previously reserved for the public sector. On the one hand, where certain aspects of the economy were improving, on the other hand, certain things took a bad turn. The public finances went out of control due to excessive government spending – the rise in defense expenditure and subsidy bills being the reasons. In addition to this, certain financial issues like the increasing BoP deficit since 1979 second severe oil shock of 1979, which doubled India’s imports between 1979 and 1982, which resulted in depleting India’s forex reserves as it was suddenly forced to pay more. The oil shock caused a global recession, where India’s exports suffered drastically. During this phase, the fund could not offset the trade deficit flows under net invisible. During the 7th Plan, India’s BoP was Rs. 41,047, and the trade deficit amounted to Rs. 54,204.

Due to the fast-changing economic situation, causing economic instability in the country, the Eighth Plan could not take off in 1990. Along with the crisis faced by India during the 7th Plan, the situation became worse in the Gulf war of 1990-91, which was accompanied by inflation in India – resulting in such a situation where Indian foreign reserves could barely finance imports of about 3 weeks. Low reserves had led to a sharp devaluation of the rupee, which led to a twin deficit issue – Budget Deficit and Current Account deficit (the country’s economy was importing more than exports, and government spending was more than its earnings). Furthermore, with India’s bond rating being downgraded, it could not seek for a short-term loan. IMF and World Bank had stopped their aid, which led the Chandrashekhar Government to the only option of mortgaging the country’s gold to avoid payment defaults. Even though this decision led to the collapse of the Chandrashekhar Government, but it helped to get over the BoP Crisis, and the formation of the Narsimha Rao Government took place.

With P.V Narsimha Rao as the PM and Dr. Manmohan Singh as the finance minister, New Economic Policy, which included several reforms, took place in July 1991, based on the liberalization, privatization, and privatization Globalisation Model. These reforms were praised for the high growth witnessed from 1991 to 2011 and poverty reduction from 2005 to 2015.

The Eighth Plan (1992-97) was from the very beginning of efforts to plan the market-oriented economy. Industries were modernized, and economies were opening up, which became the major highlight of this Plan. Post liberalization, the role of the public sector has diminished.

With Atal Bihari Vajpayee as the PM of India, the Ninth Plan (1997-2002) laid emphasis on rectifying the past inequalities and increasing economic growth with a special focus on Social justice and Equality.

Keeping in mind the inabilities of the previous plans, the Tenth Plan (2002-2007) took resolutions for immediately implementing policies that had been formulated previously. Also, to reduce the regional inequalities, the regional approach was focused upon rather than the sectoral approach. Renovation of the nation was the primary aim of the Plan so that India could be at par with the rest of the fast-growing global economies. Apart from the economic growth, social deformities were taken into account. With population policy and family planning, sociological perspectives were largely focused upon. Also, State roles were increased, and the promotion of the policy of decentralized planning took place.

Even though the global financial crisis of 2008 affected the economy of most of the countries, India performed quite well. ‘Towards Faster and More Inclusive Growth’ was the main motto of the 11th Five-Year Plan (2007-2012) under the Manmohan Singh Government. Along with this, policies related to environmental change focusing on Climate Change were taken into consideration.

The global economy was facing another crisis of economic slowdown with the commencement of the Twelfth Five-Year Plan (2012-2017) in 2012. India was also affected during this time. Hence, there was an emphasis on economic growth rate with sustainable, faster, and inclusive growth. Issues such as malnutrition, education, environmental degradation, and communication were getting attention. This policy focused on removing every gap and making India a world power.

The Era of NITI Aayog

For a long time, the experts believed that for a diverse country like India, the centralized planning would not work beyond a certain point due to its approach of ‘one-size-fits-all’, and today’s global economy would not make India competitive. It had a top-to-bottom approach for which it was felt that the states should have a voice in planning their expenditures. Often, states ruled by opposition parties faced issues related to the proper allocation of funds. As for some, the Planning Commission was seen as a body to be imposing its stringent rules on states who knew better as to how much was required for better development.

After the 12th Plan, which was the last of the five-year plans, was led to rest by the Narendra Modi government. The 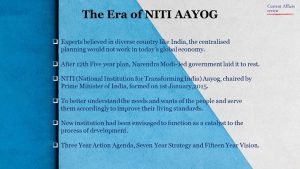 NITI (National Institution for Transforming India) Aayog, chaired by the Prime Minister of India, formed on 1st January 2015, had replaced the Planning Commission. India has undergone a drastic shift over the past seven decades – socially, economically, politically, demographically, and technologically. Simultaneously, the role of government in development has witnessed parallel evolution. Hence, to keep up with the changing scenarios of the country, the Government set up the institution to better understand the needs and wants of the people and serve them accordingly to improve their living standards. The new institution had been envisaged to function as a catalyst to the process of development. 13 different tasks to NITI Aayog are listed by the cabinet resolution, which is grouped under four major heads:

How is NITI Aayog Different from Planning Commission?

The planning commission served as an extra-constitutional body, following a Top-Down approach, whereas NITI Aayog is an advisory Think Tank following a Bottom-Down approach. The Planning Commission had powers to 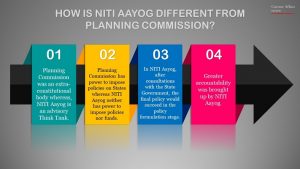 impose policies on States and allocate funds for various projects and Programmes at the National and State levels. The NITI Aayog, on the other hand, neither has powers to allocate funds nor impose policies. State Governments did not have a proactive role back then as compared to now, which they have in NITI Aayog. In NITI Aayog, after consultations with the State Government, the final policy would succeed in the policy formulation stage. This is different from what happened back then when Planning Commission would formulate policies, and the State Governments were called for fund allocations.

There is also greater accountability brought by NITI Aayog. The previous plans were said to have been evaluated after long periods once they ended, providing lesser accountability.

So far, it can be concluded that the effectiveness of NITI Aayog will depend on the course of actions it charts out with time. Even though it has marked its departure from the past, there is a burden of fulfilling certain goals in the prevailing environment. Now, the question is whether the institution will be able to retain its influence even though it does not have powers like plan allocations and give grants. Also, to meet the new requirements, there are various institutions in states which need appropriate transformations – the roles of which have to be specified. Despite the fact that NITI Aayog will facilitate grassroots planning, as stated by the cabinet resolution, but how exactly this will be carried forward is to be seen. The success of the institution in achieving the coordination within various ministries and departments will depend on the cooperation and trust received, along with the balance with which NITI Aayog and ministries work. Similarly, the success of strengthening cooperative federalism will depend on cooperation and trust from states. Hence, to make it a significant institution to transform India, NITI Aayog will have to undertake the tremendous task of shaping its character and projecting a course.

Agriculture is the process in which land is used to grow a variety of crops. It also includes breeding and raising livestock as well as poultry and aquaculture. It is the most important sector of [Read More]

Every year, the entire nation laments the havoc wrecked by the floods in one or other parts of the nation. The memories of floods devastating Uttarakhand, Chennai, Assam, Hyderabad, and Kerala are still afresh. Not [Read More]

The modern agricultural activities make extravagant use of fossil fuels that substantially contributes to environmental pollution. This was not the same in case of traditional agricilture. But most people still lives with the misconception that [Read More]