Technology is exponentially changing the face of the world in the 21st century. UAVs/drones are one of the front runners amongst such technologies, which are increasingly gaining traction over the past decade. A host of industries are employing drones for multiple tasks such as monitoring projects, surveillance, Geo-tagging of assets, reaching out to markets, etc. Governments, too, have started to set their best foot in to embrace this futuristic technology for bettering governance, reaching out to every corner of the country, and heralding new pathways for the growth of their countries. India wasted no time in embracing this new technology. As with any other nation, drone technology has set its foot in India for military applications, which later diverged into scores of civilian applications. The recent deployment of drones to deliver medical aid during the pandemic in India just underscores the extent to which drones have already intertwined with daily lives in India. Before dwelling deeper into India’s association with drone technology, let us first understand the basics of drone technology.

Unmanned aerial vehicles (UAVs), more commonly called ‘drones’ in general parlance, are basically airborne crafts without human pilots on board. With the advancements in digital technologies, their utility has proliferated in the 21st century, albeit they have a much longer history.

Drone systems are essentially comprised of four components, i.e., UAV, which is the heart of the system and possesses fixed wings, or either a single or multi-rotary fans build for flight; Payload, which ranges from medical aid to ordnance; Ground control station, which can be user-controlled or operated via satellites, is capable of controlling the flight, payload, sensors, mission planning and tethering the data link system of the drone; Datalink, that acts as the transmission network allowing the drone to communicate with the ground operator typically utilizing radio wave technology.

Back in the 1990s, the Indian Army, for the first time, imported UAVs from Israel, and soon the Indian Air Force and Navy followed suit. These drones have made their combat debut during the Kargil against Pakistan for photo-reconnaissance along the border. Though UAVs were primarily developed for the military and aviation industries, drones have found their way into the mainstream because of the range of services they render.

Drones and their versatility

Drones today have a wide range of applications in India. They perform a wide range of jobs for private operators, commercial operators, and governments. These scores of operations can broadly be classified into two categories, namely Civilian and Military. We shall first see its mainstream civilian applications.

Civilian applications: A part and parcel of our everyday lives 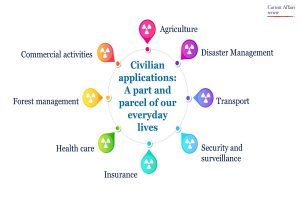 There are many other applications, like using them in weather forecasting, mining activities, urban management, and, more importantly, in military activities, which we shall discuss in the latter half of the article.

Towards the fag end of 2014, just as the drone sector had started garnering commercial traction, a major e-commerce company announced to deploy drones to deliver their products in the metropolitans of Mumbai and Bengaluru. At the same time, a pizza was delivered in Mumbai through a drone. These incidents alarmed the authorities, and as a knee-jerk reaction flying drones for commercial purposes was outlawed, and a blanket ban was imposed on its imports, citing a threat to national security. Again in 2018, sensing the imperative to commercialise the utility of drones, the Directorate General of Civil Aviation (DGCA) released the Civil Aviation guidelines legalising the flying of drones for commercial purposes. Since then, the commercialisation of drones for civilian purposes has witnessed a steep ascendancy. Since then, the flying of drones has been treading through a series of regulatory turbulences as the Unmanned Aircraft System Rules, 2020, have brought in several restrictions upon the flying of drones, particularly to private players. To clear the bottleneck, recently, in 2021, the government has notified Drone Rules 2021, which ushered in liberalisation to a great extent. Some of its salient features are;

Self-certification and digitization of several approvals through the Digital Sky platform are expected to pave the way for hassle-free manufacturing, buying, and flying of drones in India. DGCA also notified an airspace map for drones on the Digital Sky platform marking all the red and yellow zones listed for every city in India. This helps drone operators to better plan their flights and evade going astray into the restricted zones. Alongside liberalising the drone usage rules, the government has embarked on many other proactive measures to position India as a global hub for drone manufacturing by the year 2030 as a part of Atmanirbhar Bharat.

Drones in Warfield: A force multiplier

The remarks made by Indian Army chief Gen MM Naravane that drones are the future of warfare underscores the vitality of drones in military operations. India’s acquaintance with military drones dates back to the 1990s after it procured them from Israel. After Losing a manned reconnaissance aircraft Canberra PR57 to Pakistani infrared homing missiles, India wasted no time in deploying unmanned Israeli Heron drones to carry out the task. Since then, India has been procuring a range of surveillance and combat drones from Israel. However, the military applications of drones in India so far have been confined to mere surveillance and reconnaissance roles. Nonetheless, the future holds a wide scope for drones to serve the Indian armed forces in myriad ways. Let’s see a few of them. 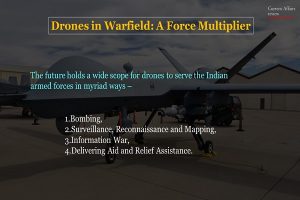 India’s fleet and projects in pipeline

As of today, India operates a moderate range of drones sourced from both foreign companies and domestic ones. Some of the drones that India operates are DRDO Rustom, DRDO Netra, DRDO Ulka, DRDO Nishant, Trinetra UAV, DRDO Ghatak, TAPAS-BH-201, NAL/ADE Golden Hawk, etc.

A $3 billion deal for the purchase of 30 armed MQ9 Reaper drones was made with the US. These are highly dreaded drones, which the US has extensively deployed in the middle east with a telling effect. Hindustan Aeronautics Limited (HAL) is developing the CATS Warrior project. In this system, one manned aircraft shall coordinate with and guide a swarm of drones to strike the enemy targets. A 20 million USD deal was signed by the Indian Army to procure high precision surveillance switch drones with night time capabilities. SMASH 2000 anti-drone system that neutralizes incoming enemy drones is being under procurement from local manufacturers. HAL is developing a Drone helicopter to airlift heavy payloads to bases located at higher altitudes.

Though industry sentiment remains bullish on India’s drone manufacturing prospects, certain hindrances aren’t letting the Indian drone industry take off at full throttle. Much of the focus in the recent past has been on manufacturing of the drones. Most of the government initiatives were incentivizing the hardware manufacturers. Little focus was beamed on developing software, which is crucial for Drones. The lack of a skilled workforce is another stumbling block. The severe shortage in skilled manpower just isn’t helping the cause at the moment. Regulatory inconsistency has been so prominent that rules are taking a U-turn every now and then, thereby discouraging the investments from private agencies. To help lift the domestic industry, the Government has imposed a blanket ban on imports of drones, depriving Indians of the access to versatile and cost-competitive drones in the domestic market. Further compounding the list of existing woes, the Indian public sector has been so snail-paced that they are notorious for missing the deadlines in the recent past. As a result, the Indian Army once rejected DRDO’s Tapas and opted for Israeli Heron. Also, Indian start-ups are severely crunched of financial resources, with meagre aid coming from the government and the culture of venture capital still in a nascent stage in India.

With a fast-growing demand for drones, India is well poised to develop a multibillion-dollar industry of drones in the coming decade. According to global market intelligence and advisory firm BIS Research, the global drone market, which is dominated by the US, Israel, and China at present, is touted to reach $28.47 billion this year, and India will account for about 4.25 percent of that. Government reckons that drone industry is expected to grow to over INR 30,000 crore in the next three years, and the drone services industry is expected to generate over five lakh jobs in three years. This optimism stems from the increasing footprint of drones in several sectors in India.

Even from a military point of view, there is an impending need for India to strengthen its forces by including drones in its arsenal. Recently, India has witnessed a first-of-its-kind terror attack that was carried out by drones on Air Force Station in Jammu, injuring two personnel. This reaffirms the changing nature of attack and warfare tactics that India cannot afford to ignore.

As of today, we are excessively dependent on the US, China, and Europe for specific components for drones like BLDC motors (brushless motors) and electronic controllers, cameras, etc. So, to insulate India from supply disruptions and over-reliance on external players, it is crucial to ramp up our domestic manufacturing infrastructure through a slew of measures like creating a dedicated fund on the lines of NIFF and AIF, upgrading the curriculum of the skilling mission to match drone industry, incentivising the domestic manufacturers on the lines of SEZ and more importantly a liberalised regulation regime to name a few. The drone sector may be nascent today, but it has a huge potential to bloom in India tomorrow. And if we fall short in the race in the initial stages, we will not be able to catch up later.

The conception of privacy as intrinsic to the individual and society has evolved over the years. Various international organisations and scholars have defined it in different ways – some emphasizing upon its social value and [Read More]

The history of Indian art and architecture is essentially a history of evolution, whereby, be it the remains of the Indus Valley civilization or the monuments of the British period, each possesses its own narrative. [Read More]

Agriculture, for centuries, has been very crucial. It is a broad term that goes beyond just growing crops and includes raising cattle – to provide varieties of food and other materials that people can consume [Read More]