An economic theory that applies modern economic tools and analysis to study issues associated often with political science has been considered as Public Choice. James Buchanan and Gordon Tullock developed this theory. The public choice approach to the political system was characterized as the study of “Politics without Romance” by James Buchanan mentioned above, an American Nobel Laureate (Nobel Prize in 1986) and a prominent member of the Virginia school of political economy. The behaviour of the voters, public institutions, and political agents is studied as the self-interested agents in public choice. Along with this, their interactions are also studied in the social system.

The above-mentioned names James Buchanan and Gordon Tullock, who taught at the George Mason University, Virginia (public choice theory associated with it), started their early work at the University of Virginia and Virginia Polytechnic Institute and state University – therefore, it became Virginia school of political economy. This school focuses on public and private sector institutions comparison as an imperfect alternative. In an article written in the year 1985, named “The Virginia School and Public Choice”, for the first time the term Virginia Public Choice School was identified by Dennis Mueller and for the field’s development the contributions were concluded. In the year 1965, the formation of the Public Choice Society took place and with this public choice developed at a fast pace – thereafter, Public Choice journal becoming one of the main focuses of the society, along with the annual meetings. These attracted the political scientists and the economists, whereby, the former brought knowledge related to political system, political institutions and their interactions, and the latter brought choice based and modelling building skills. There were contributions brought in by different scholars related to the field of sociology, philosophy, public administration, as well. 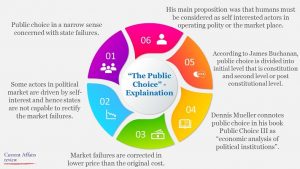 In a narrow sense, Public Choice would mean that such an analysis is concerned with state failures. HOW?? There are some actors on the political market, who are widely driven by their self-interests, and the states, therefore, are sometimes not capable of rectifying market failures, or market failures are corrected at a lower price than that of the original cost of market failure. Now, Public Choice, in a broader sense, as written by Dennis Mueller in his book Public Choice III, is “the economic analysis of political institutions”. Hence, all those economists who have been studying government interventions are considered as the public choice economists.

When economist analyses behaviour of individuals, they are aware and do not deny the fact that those individuals, driven by the goal of utility maximisation, care about friends, families and communities. But in the case of Public Choice, it has been assumed that individuals are guided by self-interest and, even more important, that the motivations of those people in the political processes are no way different than people in any market.

A very interesting theory had been proposed by James Buchanan, which basically divides public Choice into two levels. At the initial level, the constitution, which is written and agreed upon by the founders of a country, are placed, and at the second level or the post-constitutional level, placed are the politicians struggling for votes, voters and bureaucrats trying to hold on to the ruling party. J. Buchanan argued that the first level is somewhat like “setting the game rules”, and the second level was like “playing the game as per the rules”.

Individuals, while purchasing goods and services from the market, rationally make decisions as to what is best for them and, given their purchasing power, and finally select those which provides maximum utility. Similarly, while casting their votes, people are driven by self-interests and keep in mind what would be best in terms of economic interests. Not only the voters but also the elected representatives (politicians), civil servants and public officials try to maximise their benefits and behave like one of the consumers in the markets. This is in contrast to the fact that the bureaucrats and politicians are the public agents and act as per the interests and the benefits of the general public. The fundamental proposition of Buchanan was that humans should be treated as self-interested actors, whether they are operating in polity or the marketplace. It should be noted that the public choice theorists only argue that “self-interest” is the predominant motive that drives people. They do not assume that all individuals are driven by only narrow self-interests.

What Is Government Failure?

When the government intervention takes place in an economy to solve market failures, and manage macroeconomy, it might occur in failure of achieving efficient allocation of resources and finally lead to misallocation of scarce resources. Such a situation is known as a government failure.

In general terms, for the welfare of the people and upholding the interests of the society, the government-run by politicians and bureaucrats should step in to address the issue of market failures. Hence, we can say that the government plays a very crucial role to keep monopolies in check, which may harm consumers ultimately. Hence, before favouring any of the government regulations, the public choice theorists contended that market failure risks and government failure risks should be compared to each other. It has been said that the politicians and the bureaucrats are driven by their self-interest and hence, serve their own personal interests rather than the interests of the whole general public. In addition to this, the reason for widespread corruption in politics backs up such a public choice view. The outcomes of elections and political processes are also widely affected by the behaviour of those self-interested people. For instance- during elections, the voters have very little knowledge about the candidates. Along with this, it is a matter of the fact that the value of a single vote influencing the election is zero – and now, the voters will have very little interest in gaining knowledge about the candidates and the policies associated with them. The public choice theorists say that the cost of gathering information is higher than that of the benefits of voting in the election.

Predicting trends in public finance can also be done in Public Choice theory – how is the government collecting taxes and spending the tax money. Here, two essential features of public finance are pointed out. The first one is, every ordinary citizen is to pay their taxes; whether they like it or not, it is mandatory. Even if a service provided by the government makes them unhappy, one cannot refuse to pay taxes. This also means that one must pay taxes even if the tax revenues are spent on most wasteful schemes. The second aspect of public finance is that the politicians and bureaucrats running the government are spending tax money that is basically not theirs but of the general public or the ordinary citizen’s money. It is a known fact that in no way a direct reward would be received by them even if the tax revenues are spent in the best possible ways. Hence, the amount of effort invested would be less.

The key conclusion of public choice, which can be drawn from the whole discussion, is that even if the identities of people are changed in public offices, not necessarily major policy changes can be brought. Considering elections are taking place in a fair manner, and better people are being elected, it might not lead to a better government. The public choice gives a clear idea that individuals are motivated by their own self-interest, focusing on the institutional rules under which their own objectives are being fulfilled.

The concept of public choice theory has been criticized by some scholars. It has been said that, even if the assumption that individuals are driven by their self-interest has been useful in proving the crucial elements of politics, it does not really imply that all the individuals will have the same behaviour or will be behaving in the same manner, all the time. Another point where the public choice theory has been criticized is that the failure of public choice to explain political behaviour in a number of crucial areas, including voter behaviour and politician behaviour.

Public choice has gained importance with the emergence and growth of new democracies – where nations seek lessons of constructions of their own constitutional, legislative and electoral systems. The established democracies have also been taking lessons from public choice. Private interests of the politicians and bureaucrats have been given more recognition, and along with it, the needs to restrain them too.

India has recently banned FDI from the neighbouring countries. This move was primarily aimed to curb hostile takeovers by Chinese companies of Indian firms which are in distress. However, greenfield projects should have been kept [Read More]