In India, coal is the most significant and abundant fossil fuel. It supplies 55% of the nation’s energy requirements. The foundation of the nation’s industrial history was built upon indigenous coal. In the previous four decades, India’s commercial primary energy consumption has increased by nearly 700%. India currently consumes roughly 350 kgoe/year of commercial primary energy per person, which is far less than that of developed nations. Energy consumption in India is anticipated to increase as a result of the country’s expanding economy, growing population, and desire for a higher standard of living. As a result, there has been a coal shortage in a range of sectors. Even the coal stocks at India’s power plants have decreased by about 17% since April 2022 began and are now only a third of what is needed. Therefore, this article will explore the causes of the coal crisis and how it can be solved by using another alternative energy source.

Commercial coal mining has been practised in India for approximately 220 years, beginning in 1774 when M/s Sumner and Heatly of the East India Company began working in the Raniganj Coalfield on the western bank of the river Damodar. Due to a lack of demand, Indian coal mining grew slowly for over a century, but the invention of steam engines in 1853 provided it with a boost.

The country began its five-year development plans as soon as it gained its independence. The need for effective growth of the coal industry through methodical and scientific development was recognised even during the 1st Plan’s actual implementation. The first significant move toward the planned growth of the Indian coal industry was the establishment of the National Coal Development Corporation (NCDC), a Government of India Undertaking, with the collieries held by the railways as its core in 1956. 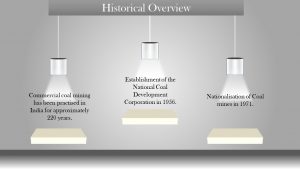 The demands of domestic consumption have been driving factors in India’s contemporary commercial coal mining from the beginning. An emphasis had to be placed on the methodical exploitation of the coking coal reserves in the Jharia Coalfield due to the expanding needs of the steel industry. The private coal mine owners failed to provide sufficient capital investment to meet the nation’s expanding energy needs. Poor labour conditions in some of the private coal mines and unscientific mining methods used by some of them raised issues for the government. These factors led the central government to decide to nationalise the privately owned coal mines. The nationalisation process was carried out in two stages, the first including the coking coal mines from 1971 to 1972 and the second involving the non-coking coal mines from 1973.

India’s dependence on coal as a source of energy

Countries have made commitments to become carbon neutral by specific dates because carbon emissions are thought to be the primary cause of global warming. India has also committed to “phase down” rather than “phase out” the use of coal in a statement on the final day of the UN Climate Change Conference in Glasgow.

Over 70% of India’s electrical demands are satisfied by coal. This coal is primarily obtained from domestic mines. India produced 716 million tonnes of coal in FY 2020–21 as opposed to 431 million tonnes a decade earlier. Since FY 2018–19, local output has been stagnant and unable to keep up with the expanding domestic demand, which has resulted in an increase in imports. With a combined production of more than 550 million tonnes, Chhattisgarh, 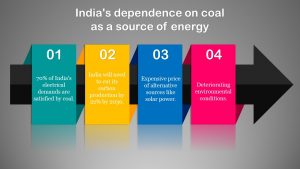 Odisha, Jharkhand, and Madhya Pradesh produce the majority of the nation’s coal, accounting for more than 75% of the overall production. India will need to cut its carbon production by 22% by 2030 in order to fulfil the prime minister’s pledge to reduce emissions by 1 billion tonnes in the next ten years, according to an estimate by the Centre for Science and Environment. It will be challenging to increase India’s use of renewable energy to 50% by 2030 from the current level of roughly 12%. Even while some renewable energy sources, such as solar, are inexpensive, they are unreliable due to the intermittency issue. Thus, they necessitate the usage of storage batteries, which raises the price. It should be highlighted that many low-income nations with low savings rates would not even have the money to make investments in renewable energy. Additionally, the harm that coal does to resources that belong to everyone, such as the environment, is not taken into account when calculating its price. As a result, governments lack strong economic motivation to reduce or stop their heavy reliance on coal.

An impending crisis exposes problems in the power industry

Nearly 17% less coal has been stored in India’s power plants since April 2022, and only a third of the necessary amount is currently available. But why?

India relies on thermal power plants to supply 70% of its energy needs. To meet these tremendous demands, the nation possesses substantial reserves of both native and imported coal. After China, India is the second-largest importer of coal.

However, starting in 2021, rising industrial demand, global price swings, and, most recently, Russia’s invasion of Ukraine caused coal prices to soar to all-time highs. India’s coal imports have been negatively impacted by all of this. India’s need for power is also rising at the same time. Energy demand rose to 132 (billion units) BU per month in 2022 from 106.6 BU in 2019. 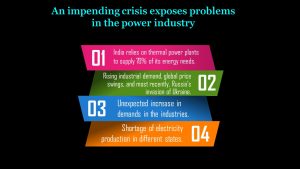 The nation’s industries, which have resumed operations following the second wave of the COVID-19 epidemic, can be blamed for the unexpected increase in demand. Additionally, despite having the fourth-largest reserves in the world, domestic coal producers cannot keep up with demand. The almost depleted thermal power plants are now under additional strain as a result of the increasing heat waves. The country’s electricity demand reportedly reached a record high of 201 gigawatts (GW) on April 26, 2022, as several areas of the nation suffered from extreme heat.

The lack of coal has affected the production of electricity in many states, including Gujarat, Rajasthan, Delhi, Punjab, and Tamil Nadu. The coal issue occurs as India works to lessen its reliance on non-renewable energy sources in order to meet climate goals.

Solution to avert the crisis

Data from the Central Electricity Authority (CEA) show that of the 401 GW installed total, coal-powered power plants account for 51%, while renewable power plants account for 28%. Even though they aren’t “solid” or dispatchable power, renewable, according to researchers, can contribute to the answer in the short term. Solar power only has a PLF (Plant Load Factor) of about 25%, with some variances. It contains variable production throughout the day and 12 hours without production at night. Solar power has poor results when compared to coal. However, even in that case, the grid receives all solar energy generated and distributes the load. The base load issue, grid stabilisation, and other concerns call for us to be realistic.

Enhancing decentralised renewable sources in and around consumption centres is also necessary for enhancing the power capacities of governments. While only a few states, like Rajasthan, Gujarat, and Tamil Nadu, have a greater potential for renewable energy, upgrades to the grid and storage capacity are required to fully utilise the renewable energy potential of these states. The transmission losses suffered during the transfer of power from one state to another (mostly from central India to the north and west), which are frequently in the range of 15–16%, can also be decreased if we can grow more renewables at consumption centres within our states.

The situation calls for increased international investment in India, as many analysts have noted subsequently, in order to phase out coal, buy out current contracts, compensate impacted populations, and move to renewable energy sources. India, in contrast to China, has drastically reduced its plans to increase its coal fleet. There are concerns that the current crisis will prompt a slight reversal in these plans and result in the commissioning of new plants. But that obviously won’t address the systemic issue at hand. Alternative energy choices would not only enhance the quality of life but also help India achieve its decarbonization objectives.

Conservationists offer a blueprint to save South India’s vultures

Vultures are critically endangered species in India and are recognised in Annexure 1 of the CMS framework. A multispecies plan has been devised for all vultures. The South India Vulture Conservation Group has come up [Read More]

India has recently banned FDI from the neighbouring countries. This move was primarily aimed to curb hostile takeovers by Chinese companies of Indian firms which are in distress. However, greenfield projects should have been kept [Read More]

Protecting the poor from becoming poorer

The pandemic has affected every section of the society and economies have been forced to go into lockdown. The lockdown has severely disrupted economic activities and big conglomerates, as well as unorganized sectors, have been [Read More]