Children are often regarded as close to God and are looked upon as someone who brings joy, laughter, and happiness. The future of any nation depends on the children, who are the foundational stones of a nation’s growth. But the pictures of child labour that we often come across at various places, like traffic signals, factories, restaurants, etc., are excruciatingly disturbing. When children who are supposed to study in schools and enjoy their childhood are found toiling in manual labour, the conscience of the nation shatters. With already 1 in 10 child labour in the world being from India, we carry the highest burden of the menace of child labour.

What is Child Labour?

Child labour is a global menace and not just restricted to any single country. In simple words, child labour is defined as the employment of children in any manual work. Various agencies have slight tweaks to the basic definition in terms of what constitutes manual work and who falls under the category of children. According to the Child labour prohibition act 1986, a “child” is a person who hasn’t yet attained the age of 14 years. At this tender age, children are supposed to grow, study, play, and enjoy the joy of childhood, bereft of any mental and physical stresses. Instead, many in this age group are being forced to work to make the ends of their families meet, and this is called child labour.

International Labour Organisation [ILO] defines child labour as “a work that not only affects their childhood but also doesn’t let the children attend the school regularly, or have a proper education.” Similarly, UNICEF (United Nations Children’s Fund) defines child labour as a child belonging to ages between 5-11 years and is engaged in at least one hour of economic activity or 28 hours of domestic work in a week. Though the definitions have a slight variation, the overall crux remains the same, i.e., any child being subjected to manual labour.

Extent of Child Labour in India

Types of Child labour in India

Child labour is manifested in myriad ways in India, some of which include;

Reasons Behind the Social Evil

Poverty: In developing countries that are riddled with massive poverty, children are often regarded as the helping hands of their respective families. In BPL families, it is difficult for the parents to look after their needs, and hence children are forcibly engaged in economic activities to support themselves and their families. It is no coincidence that the states with a high prevalence of child labour are also the ones with the highest share of poverty in India.

Debt Trap: owing to their poor financial resources, many marginalised families end up taking loans from either institutional or non-institutional sources. Unable to repay the loans, they try to maximize and commodify their human resources, thereby deploying their kids in economically remunerative activities.

Bonded Labour: when the debts taken are from non-institutional sources, they often end up in perennial financial obligation. As a result, they offer their children’s hard labour as a source of repayment. Usually, the services of children are undervalued, and hence their services would never be sufficient to repay their debts. As a result, they end up as bonded labour. Such bonded child labourers are prevalent more in sectors like brick kilns, agriculture, and other unorganised units. Bonded labour work in the most deplorable and inhumane working conditions.

Professional Needs: There are few industries where only the hands of children are suited for the work owing to the intricate and precision work demands. Adult hands are too big to carry out such tasks. Hence industries like bangle manufacturing, toy manufacturing, etc. attract child labour. 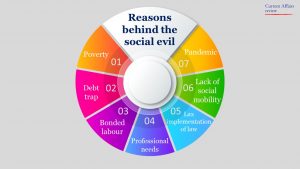 Lax Implementation of the Law: The administrative apparatus is usually indifferent to the plight of child labour. They often turn a blind eye to the pathetic destitute of child labour. Adding insult to the injury, much of the child labour happens in connivance with the local officials. Sahariya tribes in Rajasthan have been victims of this politicians-police nexus where bonded labour of children goes unabashed. Further compounding the woes, most of officials are unaware of the statutes that safeguard children from descending into child labour.

Mass Unawareness: Parents of the child labourers are so marginalised that they are oblivious of the government’s schemes like free primary education, NFSA 2013, etc., and often fail to avail these benefits. Also, the lack of understanding of the repercussions of engaging children in hard labour by the parents often drag down the children to such destitution.

Lack of Social Mobility: Due to poor access to education and economic opportunities to the marginalised communities, both historically and contemporarily, they lack the means to rise up on the economic ladder. This results in poverty and, finally in, child labour.

Pandemic: As the pandemic has pushed swathes of the population into poverty, many children were relocated from schools to working avenues to make ends meet. The pandemic has struck as a bane to the children and further exacerbated the problem.

Violation of Fundamental Rights: Child labour often violates not just one but a plethora of basic and fundamental human rights. Right to life, right to freedom, right to equal opportunities, right to dignity, right to health, and fundamental rights explicitly mentioned in article 23 and article 24 and many statutory rights like the right to free and compulsory education, NFSA, etc., are being trampled by the child labour. It also violates many of the international rights guaranteed by the Universal Declaration of International human rights (Bill of rights).

Health Hazard: Children working in several hazardous industries expose themselves to scores of ailments by virtue of their working conditions. A recent survey exposed the dark sides of the health issues associated with child labour. Children engaged in tobacco and other associated factories are vulnerable to nicotine poisoning. 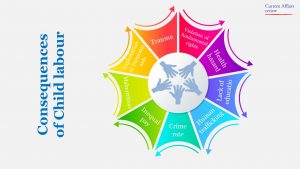 Similarly, in small-scale manufacturing units like match-making, fireworks, incense sticks, etc., children constitute a large chunk of employment. Many children were charred to death due to intermittent fire accidents at these unorganised units. Children exposed to works like waste picking and garbage handling are prone to health issues like gastro disorders, vomiting, diarrhoea, skin diseases, typhoid, and respiratory ailments, etc. since they are poor and lack access to basic medical aid, they often succumb to chronic diseases and to death. Around 22,000 child deaths per year are attributed to the nature of work.

Lack of Education: As children are being forced to engage in economic activities due to myriad reasons, consequently, they are kept away from formal education. As a result, they perennially remain uneducated, low-skilled and end up working as unskilled workers all their lives. It’s a vicious cycle that children can’t break out of.

Human Trafficking: Child labourers are an easy target for human trafficking. They are being trafficked both within and across the borders for various purposes, more importantly for sexual exploitation. Sexual abuse, HIV, sexually transmitted diseases, exploitation of girls, sexual assault, and prostitution are also the repercussions of trafficking of the child labour.

Crime Rate: Lack of education, parental care, the warmth of the house, socialising, community living, bad exposure, marginalisation by society, etc, cumulatively turn the children into anti-social elements. Addiction to drugs, alcoholism, rape, prostitution, theft, etc., are often found to be practiced by child labour. They end up languishing in jails for years due to the lack of access to legal aid.

Inequal Pay: Since most of the child labour hail from the marginalized communities who lack basic awareness, their hard labour is usually exploited without adequate monetary rewards. For the same amount of work, they are not even paid half as much as been paid to adults.

Malnutrition: Child labour who are usually poor lack the basic resources to afford nutritious food. As a result, they are lethally mal-nutritioned, falling well behind in all the nutritional parameters. According to the Ministry of Women and Child Development, nearly 33 lakh children in India are malnourished, and half of them are severely malnourished. A large chunk of these children is engaged in child labour.

Exploitation as Domestic Ads: Many children work as domestic help at houses, away from their parents and native places. They are left at the mercy of their employers. We’ve seen the news where domestic employers often exploiting and assaulting their domestic helpers (child labour). Administration bats an eye only when it becomes a news. Till then, it goes under the carpet with a sense of impunity.

Trauma: The mental trauma associated with being exploited, assaulted, trafficked, marginalised, and kept aloof from a dignified life haunts the children for the rest of their lives. It hampers their self-confidence and their potential growth.

International Labour Organisation [ILO] was a specialised U.N. agency for standardizing the labour standards, develop policies and formulate programmes. The countries that ratify the conventions and instruments of ILO are legally bound to implement them in their respective countries. India had recently ratified two of its conventions that corresponds to child labour;

Road blocks in the Implementation of Laws

Despite plethora of laws, policies, and constitutional provisions, child labour has been rampant and prevalent unabashedly in India. A few of the reasons are;

Owing to the administrational lacunae and the reluctance of the private sector to share the burden, NGOs have been rising up to the need and are rendering invaluable services in tackling the menace. They have been undertaking a range of activities like identifying the child labour, liberating them from the clutches of bonded labour, educating them, availing them medical services and nutritionary requirements, counselling the victims and the parents, etc. Their basic contributions include;

It involves working in two aspects i.e., fighting both demand and supply side

NGOs work closely with the government programs like ICDS, NFSA, RTE, Juvenile justice Act, and government ministries like ministry of family and child welfare, ministry for women, etc, to rehabilitate the rescued children. They provide shelter, education, and health for the distressed child labour.

Some of the famous NGOs engaged in these activities are;

Following measures would go a long way in fighting the social evil of child labour;

As Kailash Satyarthi quoted, “Each time I free a child, I feel it is something closer to God.” It’s high time that we realise that the children are blessing of divine to a family. Onus is upon us to preserve the innocence and tenderness that they are blessed with. We as a society must collectively come forward to create a conducive environment and society for the children to enjoy their childhood and bloom like buds.

The editorial points out the enormous task which lies ahead of the economic task force under the leadership of the Finance Minister. It also suggests measures to be taken by the civil administration and society [Read More]

What to expect from the COVID-19 economic relief package

The news article includes a video discussing the same. Click to read the article

Five Rafale jets take off from France to India