The COVID-19 pandemic, which started in the year 2020 in India, affected almost all spheres, be it human health, the economic health of the country, or education. It did make us realise the power of mother nature, and it penetrated to the deepest foundations of human civilization. India was of the opinion, after the victory over the first wave of the pandemic that the situation was well under control. When the covid-19 second wave struck India, it had severe consequences in the form of increased deaths, particularly among the youth, shortage of essential supplies required for treatment, etc. Government’s approach in dealing with the waves was somewhat different. The first wave of covid-19 had nationwide lockdowns, whereas a localized approach was taken up during the second wave. The first wave of the pandemic, being primarily urban in spread, had a greater number of cases in urban areas in comparison to that of the rural areas. In the first wave of the pandemic, the manufacturing and urban economy had come to a complete standstill, whereas, the rural economy, due to less restrictions, did not impact much. Therefore, the primary driver of the rural economy, which is agriculture, provided employment to approximately 58% of the population and continued to grow. With higher number of labours at a cheaper rate and good monsoon rain, the agriculture in India further benefitted. In the financial year 2021, while the overall contraction in GDP was 7.7%, our agricultural economy grew by 3.4%. As per the official data, Indian economy was led to a technical recession as a result of the first wave.

The year 2021 began on a positive note with the government restrictions eased, travel bans lifted, the opening of educational institutions and offices, and people gradually adopting the new normal. But when the second wave hit the country around April-May ’21, chaos was all over the country again. Out of the 50 most severely hit districts, approximately 26 of those were rural areas. The worst impacted were rural areas of states of Maharashtra, Kerala, and Andhra Pradesh. There was a rush of patients to the urban health centers from villages and smaller towns in account of treatment for immense illness caused due to the covid-19. The people in the rural area were seeking help as the health centres lacked adequate medical infrastructure. Along with this, vaccine hesitancy and supply-side restrictions had adversely affected the lives and livelihood of people of rural areas.

Impact of Covid-19 on Indian Economy

After the second wave, the overall situation of the country had started normalising, and as per some reports and analysis, it has been expected that India’s GDP might come back to its pre-pandemic levels. However, there are some challenges before Indian economy fully recovers.

During the pandemic, the MSMEs have been one of the most vulnerable sectors due to its financial resource availability, size, and the scale of businesses. As per some surveys, approximately 95% of the firms were negatively impacted due to stringent nationwide lockdowns during the first wave, and till August 2020, approximately 70% of the businesses were somewhat disrupted. Although we know that the restrictions have been eased, but till February 2021, 40% of businesses were facing severe disruptions. Some of the barriers faced by the MSMEs are access to finances, productivity, and accessing market. A survey conducted by the All-India Manufacturers Organisation states that the self-employed MSMEs, which is 35% of the MSME sector, have started closing up their units by observing carefully that they do not find any scope of their business recovery.

As per the government officials, India had a V-shaped economic recovery, and the reasons mentioned behind this fast-paced recovery were growth in digital transactions, rail freight, power consumptions, highway toll collections, e-way bills, and GST collections. A V-shaped recovery has been characterised as a rapid and effective recovery in terms of economic performance after witnessing an acute decrease in the economy. But there have been discussions that India had a K-shaped recovery rather than a V-shaped. Why is it so? Different socio-economic groups in India have faced the economic ravages of the pandemic, which was quite uneven. Post pandemic, there have been instances that the incomes of the upper segment of the population have been protected and a rise in wealth has been observed. The lower sections have lost jobs, savings, income, and purchasing power. It has been observed that the formal sectors and households having a good strong balance sheet might have taken its pace and are experiencing robust growth, but the informal non-farm sector, small households are trapped in a vicious cycle of indebtedness and poverty and is yet to improve.

A K-shaped recovery is such which splits the economy into two – where the divisions are as per the class, geographic locations, industry lines, etc. In such a recovery, the economy gradually and continuously widens the gap between those that are doing quite well and those who are not.

The pandemic has widened the wealth and income inequality in the society. Accessing the digital infrastructure has further amplified the division in social sectors such as the health and education. There has been enlargement in gap between the unorganised and organised sector. 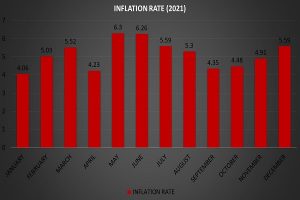 The non-food non-fuel component of CPI – the Core Inflation, at the retail level was 6.08% in November’21, whereas the wholesale core inflation for November’21 was 12.3%. Such high inflation means that the manufacturers are trying to shift the burden of higher input costs to the output prices even when the demand is recovering unevenly.

The most important bargain which exists in the economy is whether the producers are increasing the commodity prices and to what extent, or not increasing them at all. The confidence of producers raising prices is when they expect the demand would be price inelastic, i.e., demand is 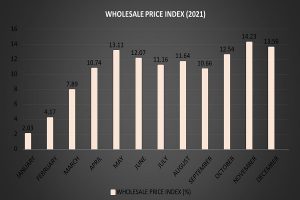 less sensitive to changes in price. Such a case arises when it is assumed that consumer incomes are good and the higher commodity prices do not hurt them much. Such situations also arise when producers are of the opinion that even if the competitors would offer lower prices to the consumers, it won’t hurt them much.

During the pandemic, countries were quite worried about inflation, while in India, this has been a matter of concern even before the pandemic – making the situation even more drastic and worrisome. In addition to this, the demand in India has not taken up its pace as it was 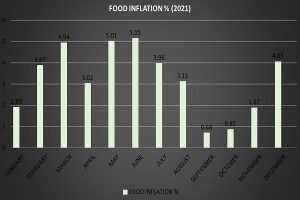 pre-pandemic. Since May’20, the Reserve Bank of India, despite India entering into a Technical Recession, has not lowered the Repo rates – due to increased inflation. As long as necessary, the RBI has decided to continue with the accommodative stance to recover and bolster Indian economy and continue to ease the pandemic effects on the economy while simultaneously ensuring that the inflation rate remains within the target.

India being the fifth largest economy in the world has to focus on a sustainable growth recovery, and just focusing on the numbers will not prove to be much of the help. Investment is the path which will help in growth momentum, and, gradually, India will be on the path of economic recovery. The aim is not just achieving the pre-pandemic level numbers but to improve even more than that and perform even better. Of course, this path of economic recovery will be very challenging and not be an easy task – but the government has to tackle them to put India to the orbit of higher growth.

The states revenue has been in jeopardy due to the COVID-19-induced lockdown, while salaries, interest payments, and other expenses have not changed. To make matters worse, the states have had to beef-up their health infrastructure and on COVID-19 measures. [Read More]

In 2018 Oxfam survey reported that the top 1% rich own almost 73% of wealth in India and the 670 million of the poorest Indian saw no more than one percent rise. [Read More]

Is the global economy headed for recession?

This news article explains in detail the economic impact of Coronavirus and it will lead the global economy to recession. This news is related to the topic, Indian Economy and issues relating to planning, mobilization [Read More]