The Mauryan king Ashoka has been known to be one of the greatest patrons of Buddhism in the history of India. Both the Buddhist texts and the king’s own inscriptions clearly echo his connection with Buddhism. One of the most remarkable aspects of Ashoka’s Buddhist affiliation was undoubtedly his concept of dhamma. The term dhamma is essentially the Prakrit variant of the Sanskrit word dharma. While the latter implies the universal law or righteousness or, by extension, the social and religious order prevalent in a society marked by Brahmanical norms, the latter essentially refers to the teachings of Buddha as per the Buddhist canon. However, the word seems to have held a more general connotation during this period; its usage in the Ashokan edicts hints to the fact that the king endowed it with a much wider meaning.

The Constituents of Dhamma

One of the foremost constituents of Ashoka’s dhamma is undoubtedly the theme of ahimsa meaning non-injury. This principle was translated into practice through a ban on animal sacrifices and also certain festive gatherings that possibly involved the killing of animals, that was clearly announced in the Rock edict 1. This edict also reports a considerable reduction noticeable in the practice of killing animals for food in the royal kitchens. 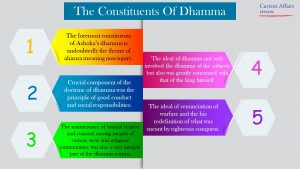 that, on turn, seem to have been connected with certain key relationships. For example, the Rock edict 9 highly criticizes certain ceremonies that were performed by contemporary people, especially women, on various occasions such as illness, marriage, birth, and setting forth on journeys on the ground of their inability to yield effective and desired results. These are, in turn, compared with the respective ceremonies of dhamma which it was concluded were guaranteed to produce results either in this world or the next one. The ceremonies of dhamma included proper courtesy to slaves and servants, respectful behaviour towards elders, exercising of restraint in one’s dealings with all living beings, and the show of liberality towards shramanas and Brahmanas.

The maintenance of mutual respect and concord among people of various sects and religious communities was also a very integral part of the dhamma corpus. Thus, it is quite evident that the doctrine of dhamma by no means aimed to promote any particular sect, be it Buddhist or others. As per the Rock edict, 12 people were expected to exercise restraint in their criticism against other sects and commendation of their own. But the principle of mutual respect was not merely restricted to this; rather, it urged for something more positive, i.e., the attempt to honour and understand the dhamma of others. Ashoka was convinced that it was possible to promote the essentials of various dhammas of various peoples by such means.

The ideal of dhamma not only involved the dhamma of the subjects but also was greatly concerned with that of the king himself. The Rock edict 2 refers to the activities which Ashoka possibly perceived as the dhamma of the king. These include making provisions for medical treatments, planting beneficial medicinal herbs, roots, and fruits, and digging of wells. Though such activities were indeed typical to the dharma of king in all traditions but what made Ashoka’s dhamma to stand out as particularly distinctive was the fact that his edicts clearly stated that the aforementioned measures were intended not only for the benefit of people but animals as well.

One of the most striking features of Ashoka’s idea of his own dhamma and the dhamma of the king was the ideal of renunciation of warfare and his redefinition of what was meant by righteous conquest. This seems to have been greatly influenced by the Buddhist concept of chakkavatti dhammiko dhammaraja, which refers to a king who establishes his control over the four quarters by means of righteousness rather than through the use of violence and force. Hence in such cases, the opponent rulers decline to resist and instead happily accept the ideal king’s sovereignty that, in turn, is about spreading dhamma and not mere territorial conquest. The 13th Major Rock edict concludes dhamma-vijaya to be the best kind of conquest and states that Ashoka had achieved it over the Yavanas, Kambojas, Nabhakas, Nabhapanktis, Bhojas, Pitinikas, Andhras, Pulindas, Cholas and Pandyas. Not just indigenous kings, but Ashoka claimed to have attained dhamma-vijaya against foreign kings too such as Antiochus II, Ptolemy II, Philadelphus of Egypt, Magas of Cyrene, Antigonus Gonatas of Macedonia, and Alexander of Epirus or Corinth.

One of the most remarkable aspects of Ashoka’s reign was that not only did the king devise the doctrine of dhamma,

but he also took the measures required for the propagation of dhamma. Officials such as the kumaras, yutas, rajukas, mahamatas, anta-mahamatas, pulisani and members of the parishad were endowed with the responsibility of ensuring the oral propagation of the message of dhamma. Apart from this, Ashoka also created a special cadre of 13 dhamma mahamatas. As per Rock edict 5, these officials were responsible for spreading dhamma within the kingdom and also among the border population consisting of Yonas, Kambojas, Gandharas, Rishtikas, and Pitinikas.

The nature of dhamma is one of the most contentious issues which has been time again, vigorously debated among various scholars. Mostly it has been perceived as a sort of ‘universal religion’ constituting of certain elements common to all religious traditions. It has been seen as having the element of raja-dharma, which is present in both Brahmanical and Buddhist traditions and consists of various political and moral principles. Again, some are of the opinion that it was a sort of Buddhist upasaka dhamma, i.e., Buddha’s teachings for the laity, while some others consider it to be a combination of all of these.

Some scholars are of the opinion that it was in fact, the considerations of political expediency that guided the 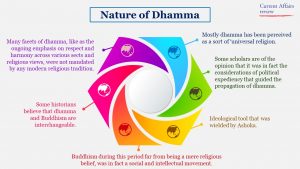 propagation of dhamma, thereby belittling the Buddhist aspect of dhamma. These scholars have further pointed out that there need not be necessarily any connections between the personal beliefs and the public proclamations of a statesman. Dhamma, it was concluded by these scholars to be an ideological tool that was wielded by Ashoka to ensure the consolidation of his far-flung empire. For given the lack of support that corroded the early years of his reign, Ashoka sought the support of non-orthodox elements and was aware of the practical advantages of propagation of dhamma. For dhamma was essentially an ethical concept focussing on the relationship between an individual and society. For it must be remembered that though indeed Ashoka was highly influenced by and practised Buddhism himself, but Buddhism during this period, far from being a mere religious belief, was, in fact a social and intellectual movement influencing various aspects of social life. Hence any responsible king was required to be aware of its immense social impact and thereby locate himself in the context of Buddha’s teachings.

Some historians are of the opinion that dhamma can be held as synonymous to Buddhism. These groups of scholars have further argued that through dhamma, Ashoka basically intended to ensure the largescale propagation of Buddhism and make the latter the religion of the Mauryan state. However, the edicts clearly contradict such an outlook. For they hint to the concern for a broader ethic that would aid the exploration of ways of governance and reduce social conflict and intolerance. Though, indeed it was couched in a language similar to Buddhism, but its ideas were such that were central to contemporary debates on matters that were hardly the concern of religious institutions. Hence it may be concluded that Ashoka’s dhamma though indeed was highly influenced by the precepts of Buddhism, but it can nevertheless not be considered as identical to it. For there were certain aspects of dhamma, such as the continued emphasis on mutual respect and concord between different sects and religious beliefs, that were not enjoined by any contemporary religious tradition. Hence his dhamma cannot be reduced to any narrow sectarian belief.

Mind the gap: on India’s focus what needs to be done

In the middle of this pandemic, the U.S.-China trade war has led many companies to leave China and search for better options. In these times, following the adage “Never waste a crisis” many state governments have scrapped labour laws in the hope to lure these companies… [Read More]

The editorial points out the major issues which have led to the economic downfall, due to the outbreak of COVID-19. It prescribes certain steps and measures to control and curb this economic downfall through the [Read More]