The existence of over 1.3 billion people in Asia depends on the sustainability of the Himalayan ecosystem. This area is unique due to its natural geological wealth, forests, wildlife, flora, fauna, and biodiversity, as well as its traditional wisdom and mountain agriculture. The precarious nature of the abundant and diversified Himalayan ecology is now generally acknowledged. It is important to avoid making any irreversible alterations to the ecology. The resilience of the glaciers and the Himalayan ecosystem is crucial for the survival of the perennial rivers in north India.

According to the Fourth Assessment Report of the Intergovernmental Panel on Climate Change (IPCC), there is undeniable proof that anthropogenic emissions are to blame for the current trends in the global warming of the earth’s atmosphere. The IPCC predicts that over the next 100 years, average surface temperatures will rise by 1-6.3°C on a worldwide scale. It is commonly known that extremes as well as averages play a role in climate change. Hence the Indian Himalayan Region’s rising temperatures and shifting precipitation patterns are predicted to have a more significant impact on some human populations and the area’s mountain ecosystems. The modifications are likely to be intricate. This article aims to shed light on the numerous components of Himalayan ecology’s sensitivity and how the biodiversity’s vulnerability might be protected.

The Himalayan ranges are the world’s youngest and highest mountain systems. In terms of both biological and physical qualities, they represent a very complex and varied system. There is a distinct geographic and ecological entity in the area. It creates a unique environment of its own and has an impact on the climate throughout much of Asia. The Indian Himalayan Region (IHR), which has a geographical area of over 5.3 million square kilometres, is made up of a massive mountain range that stretches over 2500 kilometres between the Indus and Brahmaputra River systems, rising from low-lying plains to over 8000 metres above sea level. It is about 300 kilometres wide at its widest point and 80 kilometres wide on average.

The Himalayan environment is essential to the ecological security of the Indian landmass and occupies the strategically important position of the entire northern limit of the nation (from the northwest to the northeast). IHR is significant from a national security perspective as well as for its extensive forest cover. These areas are either permanently covered with snow or have harsh climates that prevent tree development, such as alpine pastures. As a result, just 42% of the Himalayan region’s overall geographic area is actually covered by forests. Of this, 21% are covered in a dense canopy of trees, and 50% are covered by very good forest cover (FSI, 2015). 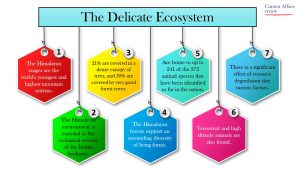 As one of the 36 global biodiversity hotspots, the Himalayan forests support an astounding diversity of living forms over longitudinal and altitudinal gradients. Despite occupying only 16.1% of India’s total land area, the Himalayan region is home to 81.4% of the nation’s gymnosperms, 47.4% of its angiosperms, 59.54% of its lichens, 58.7% of its pteridophytes, 43.9% of its bryophytes, and 53.17% of its fungi (Thematic Report on Mountain Ecosystems, 2002).

The Himalayas are home to up to 241 of the 372 animal species that have been identified so far in the nation. More than 1,200 different bird species make up avian diversity. The Himalayas are home to about 50% of all blooming plants in India, 30% of which are indigenous to the area. The area has over 816 different species of trees, 675 different wild foods, and over 1740 different types of medicinal plants, and 3160 of these are native to the area only. Three important terrestrial species—the tiger, elephant, and rhinoceros—call the foothills home, while the high-altitude ecosystems support some unusual animal species, including the snow leopard, red panda, hangul, chiru, musk deer, and Himalayan tahr (ibid). But a complicated interaction between climatic and geological processes, economic marginalisation, and harmful methods of resource consumption has resulted in a significant resource degradation situation with ensuing environmental effects on the incredibly complex and vulnerable Himalayan ecosystem.

Impact of Climate Change on the Delicate Ecosystem

Mountainous ecosystems with high ecological sensitivity, such as the Himalayas, are particularly vulnerable to the negative effects of global climate change due to both natural and anthropogenic emissions from other parts of the world as well as those resulting from unforeseen development activities in the area. Resources from the Himalayan Ecosystem are essential in the face of anthropogenic activities, climate change, and natural disruptions. It has significant effects on how management techniques are developed and how dependent human civilizations are maintained. Some of the significant effects of global warming on the Himalayan region include a) variability in the volumetric flow of water in the rivers, b) biodiversity loss, c) unsustainable changes in ecology, d) glacier recession, e) deforestation and degradation, f) conditions for impending natural disasters and g) displacement of traditional societies vulnerable to Himalayan ecosystem change.

IHR is extremely vulnerable for geological causes as well as the strain brought on by rising population pressure, the overuse of natural resources, and other associated issues. The impact of climate change may possibly increase these impacts. The Himalayan ecosystem is projected to suffer from the effects of climate change due to rising temperatures, changed precipitation patterns, drought periods, and biotic factors. This would have an effect on downstream residents across the nation and abroad, as well as the very survival of indigenous people in the uplands.

Because human activities are anticipated to create above-average climate changes in mountain regions, the consequences of these changes for human health need to be reviewed.

The Himalaya is known as the “third pole” because it has a sizable region covered in permanent snow and possibly the highest density of glaciers outside of the polar caps. The estimated area covered by glaciers is 33,000 km2, and it is projected that the Himalayan glaciers produce 8.6 X 106 m3 of water yearly. Asia’s seven major rivers—the Ganga, Indus, Brahmaputra, Salween, Mekong, Yangtze, and Huang Ho—are fed by Himalayan glaciers. Concerns have been raised about the possibility that glaciers may be melting more quickly due to global warming. It is also reported that there are no consistent patterns in the behaviour of glacier melt. Snowmelt in the spring has started earlier as a result of global warming; in low-elevation Mountain catchments, seasonal fluctuations in stream-flow have already been influenced by enhanced glacier melting. Permafrost will continue to thaw, and mountain glaciers will continue to recede in all areas where they are found. In addition, it is anticipated that Himalayan glaciers will lose more mass throughout the course of the 21st century under scenarios with increased greenhouse gas emissions. Due to changes in the hydrology of the glacier basin, the downstream water budget, the influence on hydropower plants due to variations in flow, flash floods, and sedimentation, melting glaciers have a substantial impact on the water resources of the Himalayan rivers. The increased quantity and size of glacier lakes, the speeding up of flash floods and Glacial Lake Outburst Floods (GLOFs), the impact on agricultural practises in the high Himalayan region, and other factors further increase the risk associated with glacier hazards. Glacier melting is a natural phenomenon that cannot be stopped. The risks associated with glacier hazards do, however, rise as a result of glacier melting. In order to analyse the disasters caused by the melting of the Himalayan glaciers, numerous Indian institutes, organisations, and universities monitor the glaciers on a vast scale.

Ecosystems have the innate ability to resist small changes in the environment, which results in an inherent carrying capacity. When this limit is reached, the eco-characteristics system’s alter in ways that are unacceptably harmful to society and the environment. This may result in a variety of outcomes, including the extinction of rare or endangered species, species migration, and habitat shifts. The sustenance of life, including that of humans, is affected by all of these changes. To safeguard the changes, the National Action Plan on Climate Change (NAPCC) has been set up by India, which is an internal strategy for implementing environmentally sustainable development using its own resources. It finds actions that advance developmental goals while also contributing to the effective and efficient tackling of climate change. Hence, the focus will be placed on adhering to the following guiding principles embodied in NAPCC when developing and implementing strategies and plans to accomplish the mission’s objectives.

Additionally, the National Mission for Sustaining Himalayan Eco-system (NMSHE) seeks to: a) develop appropriate management and policy measures for sustaining and safeguarding the Himalayan ecosystem, including Himalayan glaciers; b) collaborate with the states in the Indian Himalayan region in the implementation of scientifically derived policy measures.

The Ministry of Science and Technology has been given the task of carrying out this goal in recognition of the scientific and technological inputs needed to sustain the delicate Himalayan ecosystem. But for the mission to be successfully implemented, strong collaboration with the Ministry of Environment and Forests, and the various state governments is crucial.

The mission tries to develop management strategies for maintaining and protecting the Himalayan glaciers and mountain ecosystem by:

Additionally, to highlight local cultures that show sustainable living practises for resilient communities in keeping with the Himalayas’ pristine nature, the Central and State governments together organise an annual festival of the Himalayas. This will also make the rest of the nation aware of how crucial the Himalayas are to Indian culture.

Therefore, efforts to protect the complex ecosystem raise the need for action and evaluation that could lead to improved ecological and human well-being. Consequently, there is always a need for sustainable action, and additional strategies must be put into place so that factors within our control can be monitored and the health of the pristine Himalayan ecosystem can be replenished.

Relevance:  The lockdown in the backdrop of COVID-19 pandemic has created number of complication and has given rise to different, unexpected outcomes. One of these un-anticipated outcomes are the negative impact on the access to [Read More]

Relevance There are about 200 state laws and 50 central laws related to workforce in India. However, none of the central and state laws define ‘labour laws’. Recently, The Labour Code on Industrial Relations bill [Read More]

In recent years there has been a new bonhomie between Nepal and China. This is a concern for India as China has been using the Indian neighbours to increase its presence in South Asia. China [Read More]